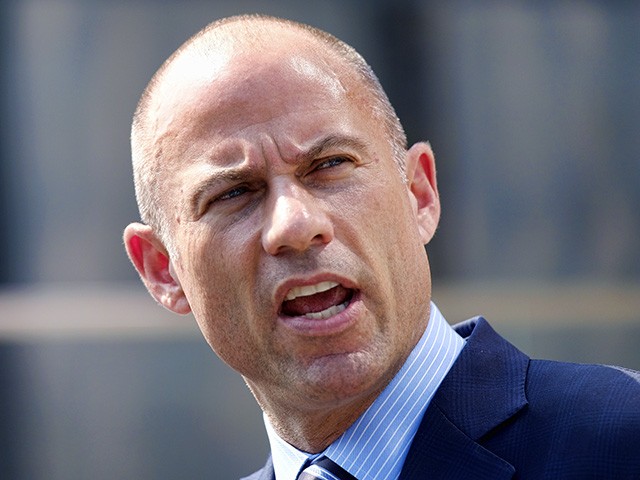 Michael Avenatti, the lawyer of pornographic actress Stormy Daniels, reacted furiously to President Donald Trump’s insults directed at the pair, referring to the president as a “disgusting misogynist” whom he and the United Nations laugh at.

Earlier Tuesday afternoon, President Trump fired off a celebratory tweet about beating Daniels’ defamation lawsuit, writing, “Great, now I can go after Horseface and her 3rd rate lawyer in the Great State of Texas. She will confirm the letter she signed! She knows nothing about me, a total con!”

In response to the President Trump’s tweet, Avenatti wrote: “You are a disgusting misogynist and an embarrassment to the United States. Bring everything you have, because we are going to demonstrate to the world what a complete shyster and liar you are. How many other women did you cheat on your wife with while you had a baby at home?”

You are a disgusting misogynist and an embarrassment to the United States. Bring everything you have, because we are going to demonstrate to the world what a complete shyster and liar you are. How many other women did you cheat on your wife with while you had a baby at home? https://t.co/npOKOEFju6

Moments later, Avenatti said tens of millions of Americans are fed up with the president’s “fraud, lies, and corruption,” adding that he and the U.N. are laughing at his leadership. The lawyer’s tweet is a reference to President Trump’s recent U.N. General Assembly address in which he was met with light laughter after stating his administration had “accomplished more than almost any … in the history of our country”.

.@realDonaldTrump – tens of millions of Americans are tired of your fraud, lies, and corruption. They are equally tired of your attacks on women, especially the ones who you have had sex with while cheating on your wives. We (and the UN) are laughing AT YOU, not with you. #Basta

A defiant Daniels took aim at the president with her own tweet, writing: “Ladies and Gentlemen, may I present your president. In addition to his…umm…shortcomings, he has demonstrated his incompetence, hatred of women and lack of self control on Twitter AGAIN! And perhaps a penchant for bestiality. Game on, Tiny.”

Ladies and Gentlemen, may I present your president. In addition to his…umm…shortcomings, he has demonstrated his incompetence, hatred of women and lack of self control on Twitter AGAIN! And perhaps a penchant for bestiality. Game on, Tiny. https://t.co/6DpDD5ELtj

President Trump’s insults are the first counter punch he has thrown since Daniels made belittling statements about the president’s genitalia.

She describes Trump’s penis as “smaller than average” but “not freakishly small”.

“He knows he has an unusual penis,” Daniels writes. “It has a huge mushroom head. Like a toadstool …

“I lay there, annoyed that I was getting fucked by a guy with Yeti pubes and a dick like the mushroom character in Mario Kart …

“It may have been the least impressive sex I’d ever had, but clearly, he didn’t share that opinion.”

The war of words comes after a federal judge on Monday dismissed Daniels’ defamation lawsuit against President Trump. The ruling states that the president is entitled to legal fees from Daniels, which according to the Trump lawyer Charles Harder, will be determined at a later date.

Here’s the full order, which includes attorneys’ fees for Trump if they seek them: https://t.co/Xe1LAo84bg pic.twitter.com/lwPj2V1Cmn

In September, Judge S. James Otero said a tweet the president wrote about Daniels in April appears to be “rhetorical hyperbole” and speech protected under the First Amendment. Daniels sued President Trump in April after he said a composite sketch of a man she said threatened her in 2011 to keep quiet about an alleged affair with the real estate mogul was a “con job.”

President Trump tweeted that the man was “nonexistent” and that Daniels was playing the “fake news media for fools.” He retweeted a side-by-side photo comparing the sketch with a photo of Daniels’ husband. “To allow the complaint to go forward and to have one consider this to be defamatory in the context it was made would have a chilling effect,” Otero said.

In a strongly-worded statement, Harder hailed Otero’s ruling, characterizing it as a “total victory for President Trump and total defeat for Stormy Daniels”:

Last week Trump’s legal team argued that it made no sense for them to keep fighting in court over a $130,000 hush payment received by Clifford, also known as Stormy Daniels, as she invalidated the non-disclosure agreement she signed with Trump’s longtime fixer and lawyer, Michael Cohen.

Avenatti wasted no time in filing a Notice of Appeal with the Ninth Circuit in a bid to reverse the dismissal. “His record before the Ninth Circuit has been anything but good,” the lawyer tweeted, sharing a copy of the filing.

Here is the Notice of Appeal we just filed with the Ninth Circuit relating to the defamation claim against Trump. His record before the Ninth Circuit has been anything but good. #Basta pic.twitter.com/SK8QdycoUW

As Breitbart News reported, Daniels sued the president and his former personal lawyer, Michael Cohen, who negotiated the deal, so she could speak publicly about the sexual tryst without fear of reprisal. Cohen had threatened to sue her for $20 million. Lawyers for Trump and Cohen now say the deal that paid Daniels $130,000 to keep quiet was invalid and they won’t sue her for breaking it.

While President Trump and Cohen want the court to toss out the litigation as moot, Daniels’ lawyer is eager to keep the case alive. Avenatti, who has frequently and aggressively criticized Trump in the news and has said he is considering challenging him in the 2020 presidential race, wants to take testimony from Trump about whether the deal was inked to silence Daniels while he was running for president.

Cohen has pleaded guilty to campaign finance violations for arranging payments to both Daniels and a former Playboy model to influence the election. Essential Consultants, the company Cohen set up to make the payment to Daniels, wants Daniels to return her $130,000 payment. Avenatti wants the defendants to pay his legal fees.