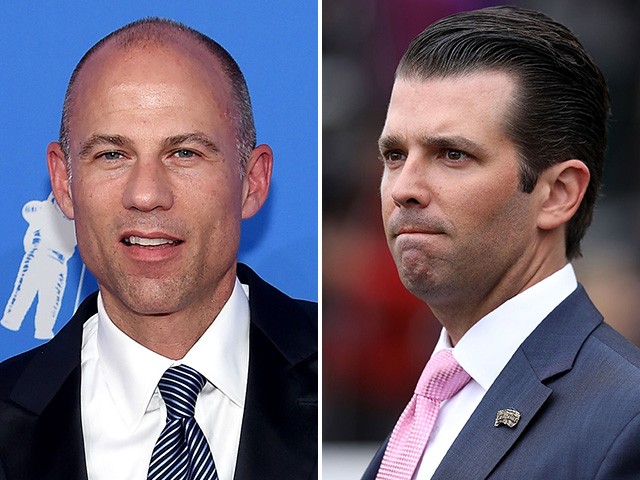 Fresh off challenging Donald Trump Jr. to an MMA fight, television lawyer and Resistance hero Michael Avenatti predicted Thursday that President Donald Trump’s eldest son will be indicted before the end of the year.

“Donald Trump Jr. will be indicted before his birthday on 12-31-18,” Avenatti tweeted. “If you doubt my prediction, please check my record over the last 7 months. #Winning.”

Donald Trump Jr. will be indicted before his birthday on 12-31-18. If you doubt my prediction, please check my record over the last 7 months. #Winning

Avenatti is not the first to predict Trump Jr. may face legal troubles. In August, longtime Republican operative Roger Stone said in an interview that he believes special counsel Robert Mueller will indict the president’s eldest son on a process crime.

“The special counsel is going to charge Donald Trump Jr. with lying to the FBI. Notice they’re not charging him for having an illegal meeting with a Russian at Trump Tower because there’s nothing illegal about that meeting,” Stone told James Miller of The Political Insider. “[P]ut more precisely, the only thing illegal about that meeting was how the woman got in the country, how she got a visa from the Obama State Department, and why she was meeting with an official from Fusion GPS before and after the Trump Tower meeting.”

I’m having lunch with Michael Avenatti @MichaelAvenatti at the Vanity Fair Summit and he’s proposing a three-round mixed-martial arts fight with Donald Trump Jr. @DonaldJTrumpJr for charity. No joke.

Moments later, the 2020 hopeful took to Twitter to confirm that he was indeed serious about squaring off against Trump Jr., tweeting, “This would be for two great causes. I’m in.”

This would be for two great causes. I’m in. https://t.co/zo46yhsXCi

Avenatti claimed he would split the fight’s proceeds between Rape, Abuse & Incest National Network (RAINN) and “rebuilding” Puerto Rico — although the racer car driver did not specify which charity, if any, he would donate to help the island hit by Hurricane Maria in September 2017.

My portion of the proceeds from the fight will be split 50% to rebuilding Puerto Rico and 50% to @RAINN. Just waiting on Bif to confirm. #Basta

Avenatti’s “record over the last 7 months” includes the confirmation of Supreme Court Justice Brett Kavanaugh, which even left-wing journalists blamed on his dilution of Christine Blasey Ford’s allegation of teenage sexual assault. Avenatti escalated these accusations with outlandish claims of “gang rape” and date-rape drugs.