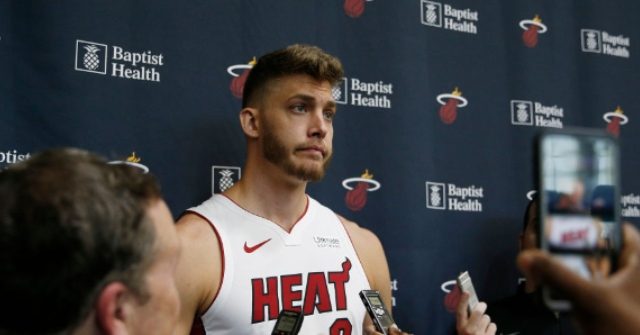 The Miami Heat have traded center Meyers Leonard only a week after he was suspended for shouting an antisemitic slur on a video.

On Wednesday it was announced that the Heat traded Leonard to the Oklahoma City Thunder in exchange for Trevor Ariza. However, according to ESPN, the Thunder are likely to waive Leonard once the trade is complete.

ESPN Sources: Oklahoma City is finalizing a trade to send Trevor Ariza to the Miami Heat for Meyers Leonard and a 2027 second-round pick. Leonard must still waive his no-trade clause because of the one-year Bird restriction on his deal, which he’s expected to do for Miami.

You may recall that Leonard found himself in a world of trouble after he was seen using an antisemitic slur while he was playing a video game on March 9.

Once the video went viral, the Heat immediately put him on ice and removed him from the playing roster.

The NBA also issued a quick statement, saying, “We just became aware of the video and are in the process of gathering more information. The NBA unequivocally condemns all forms of hate speech.”

Meyers put out an apology statement, but his gaming sponsor, Origin PC, dropped him anyway.

The league also fined Meyers $50,000 for the incident in the days after the video became public. In addition, the NBA said the player would also be “required to participate in a cultural diversity program.”

The quick dismissal of Meyers’ career seems to be at odds with how the Philadelphia Eagles’ Desean Jackson was treated after what is clearly far worse antisemitism. Last year, Jackson posted a series of tweets praising antisemitic Nation of Islam leader Louis Farrakhan and approvingly posted several quotes from Adolf Hitler. Days went by before the NFL finally did something about it. Ultimately, Jackson only suffered a slap on the wrist for his conduct.