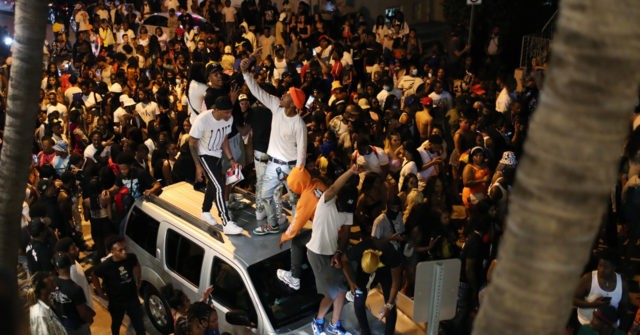 Due to spring breakers pouring into Miami Beach, local officials declared a state of emergency, imposing a curfew and shutting down causeways as part of a greater effort to curb the crowds and excessive partying.

Miami-Dade stands as one of the Florida counties hit hardest by the Chinese coronavirus, but that did not stop thousands of spring breakers from flocking to Miami beaches and the entertainment district over the weekend to party:

After party-goers gathered in the streets flouting social-distancing rules, the city of Miami Beach imposed an 8 p.m. curfew in its busiest entertainment district, as it attempts to control hordes of vacationers who have become unruly in recent days https://t.co/ibshpLgOZq pic.twitter.com/UlBEjW0mJD

As a result, Miami Beach Interim City Manager Raul J. Aguila declared a state of emergency “in light of the Miami Beach Police Department’s significant concerns relating to larger than expected spring break crowds,” per a March 20 order, which imposed an 8 p.m. curfew and shut down certain paths for at least 72 hours.

“This was not an easy decision to make,” Aguila said. “We are doing that to protect the public health and safety.”

“Spring break in Miami Beach may be one of the great rites of passage, but only if you plan on following the rules,” the city’s website reads. “Otherwise, you might as well just stay home and save yourself the court costs and damage to your reputation.”

The city added it has “zero tolerance for public drunkenness, street fights, theft of any kind and illegal drug use.”

“That simply puts our visitors and residents at risk of serious injury, or worse,” it adds, listing a series of “high impact measures” due to the coronavirus. These include the prohibition of alcohol consumption on public beaches, restrictions on city streets, and capacity limits on high-traffic public beaches.

“At the end of the day, all the policing in the world isn’t going to stop something terrible from happening if it’s going to happen,” Miami Beach Mayor Dan Gelber said on Saturday.

“Our city right now in this area has become a tinder, and we cannot have a policy of simply hoping that it’s not lit,” he added.

On Sunday, Miami Beach commissioners voted unanimously “to empower the city manager to extend the curfew in the South Beach entertainment district until at least April 12, effectively shutting down a spring break hot spot in one of the few states fully open during the pandemic.”