Actress Mia Farrow suggested that President Donald Trump isn’t a “real leader” because he didn’t stop to listen to the so-called “peaceful protesters” outside the White House on Monday.

A real leader would go our and listen to the protestors. They are peaceful protest outside the WH. But Trump is a coward.

Protests taking place in cities across the country — which have quickly devolved into riots — appear to be in response to the death of George Floyd, who died in Minnesota last week after former police officer Derek Chauvin was seen pressing his knee onto his neck. 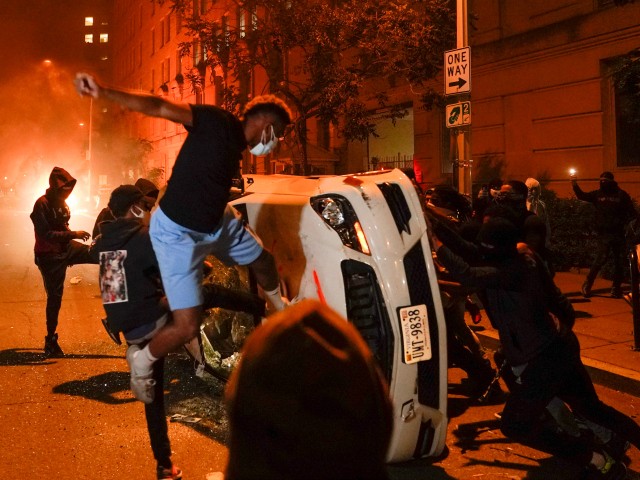 Demonstrators protest the death of George Floyd, Sunday, May 31, 2020, near the White House in Washington. Floyd died after being restrained by Minneapolis police officers. (AP Photo/Evan Vucci) 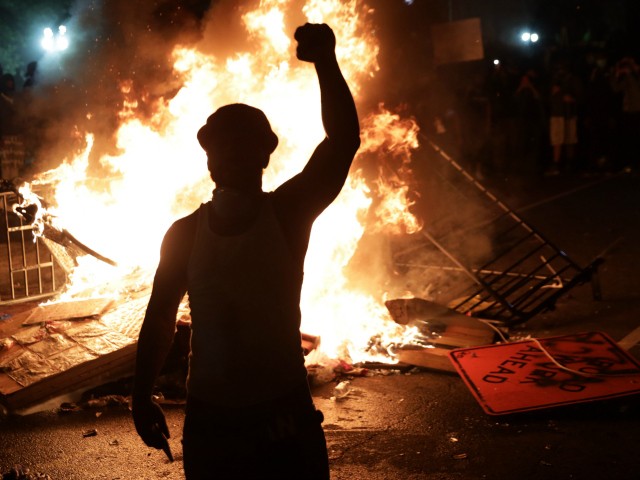 Demonstrators stand around a fire during a protest near the White House in response to the killing of George Floyd May 31, 2020 in Washington, DC. Former Minneapolis police officer Derek Chauvin was fired then arrested for Floyd’s death and is accused of killing Floyd by kneeling on his neck. (Alex Wong/Getty Images)

On Friday, the state of Minnesota announced that Chauvin was arrested and charged with third-degree murder and manslaughter.

Historic St. John’s Church across Lafayette Square from the #WhiteHouse has been set ablaze by rioters tonight.#Shocking pic.twitter.com/HdiYZ8Ikg1

Following Floyd’s death, days of riots ensued across the country — including in Washington, D.C. and outside the White House — that have involved looting, buildings being set on fire, businesses destroyed, and people being beaten and killed.

The riots have prompted several cities across the nation to issue curfews in an attempt to quell what appears to be a perpetual state of chaos seen in videos circulating on social media.

Looting and graffiti has also taken place in Washington, D.C., with areas around the White House seen engulfed in flames, which included the historic St. John’s Episcopal Church near the White House.

President Trump visited St. John’s Church earlier on Monday after he was seen walking out of the White House and into Lafayette Square — the epicenter of the riots — according to Fox News’ Kristin Fisher.

I almost can’t believe what I’m seeing. POTUS just walked out the front door of the White House and into Lafayette Square – the epicenter of the DC protests – to visit historic St. John’s Church, which was set on fire last night. pic.twitter.com/XueoF2RC6z

On Sunday, President Trump announced that the United States will be designating the violent leftist group Antifa as a terrorist organization.