NUWEIBA – A dozen photographs have been removed from an exhibition on Israel in the Mexico City Metro after complaints filed by the Boycott, Divestment and Sanctions (BDS) movement against the Jewish state, claiming the images, which included scenes from the Golan Heights and eastern Jerusalem, depicted territories under “brutal military occupation.”

Israel’s Foreign Ministry on Sunday confirmed that 12 of 50 photographs had been removed from the “A Look at Israel” exhibit in the city’s metro. Israel’s Ambassador to Mexico will meet with Mexico City Mayor Claudia Sheinbaum — the city’s first Jewish and first female mayor — to “resolve the issue,” the ministry said.

“There is an attempt by pro-Palestinian elements to disrupt Israel culture month,” the ministry said. “The embassy is working to proceed with the scheduled activities as planned.”

Forty Mexican organizations, unions, networks and diplomatic missions from the Palestinian territories, the Arab world and member states of the Organization of Islamic Cooperation (OIC) protested the exhibit, the Ramallah-based BDS movement said.

One of the photographs features a camel overlooking the Mount of Olives in front of the Dome of the Rock on the Temple Mount in Jerusalem’s Old City.

Mexico considers areas over the pre-1967 lines, i.e. the territories captured by Israel in the defensive Six-Day War in June 1967, as “occupied.”

The exhibit is part of an ongoing season of cultural events sponsored by Israel’s embassy in Mexico. The BDS protests also succeeded in cancelling an Israeli dance performance that was planned for May 15, which coincides with the Palestinian “Nakba” Day, the day that commemorates the “catastrophe” of the establishment of the State of Israel. 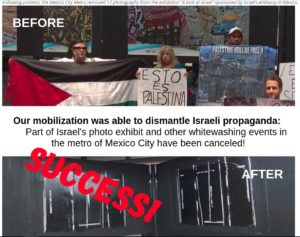 “The fact that the Israeli embassy lied by presenting those territories as Israeli is no coincidence,” Mahmoud Nawaja’a, general coordinator of the Palestinian Boycott, Divestment and Sanctions National Committee (BNC) said.

“It is part of Israel’s strategy to legitimize its attempts to illegally annex Palestinian and Syrian land,” Nawaja’a stated. “We deeply appreciate Mexico City’s swift action and respect of international law.”

“The Israeli government routinely uses art and culture to cover-up its crimes against the Palestinian people and violations of international law,” he added. “We send a heartfelt appeal to Mexico City and human rights organizations in the city to refuse all arts shows or exhibits that are sponsored by the Israeli government or its embassies until Israel respects Palestinians’ full rights.”