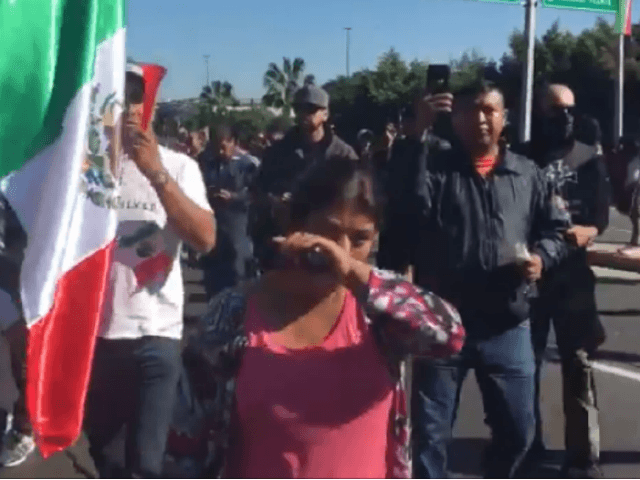 Mexican protesters took to the streets on Sunday to protest the growing influx of Central American migrants who have made their way to the border city of Tijuana.

In the most recent protest, groups of Tijuana residents want to evict the migrants from a shelter where approximately 2,000 Central Americans are staying. The Tijuana government set up the shelter as the city witnessed a reported buildup of federal and state police forces while the numbers of migrants continue to climb.

In two videos shared online by U.S. journalist Emily Green, dozens of protesters, some wearing wrestling masks and bandanas, can be seen marching towards the makeshift shelter.

Anti migrant protestors headed to shelter where caravan of migrants has set up camp to “kick them out.” pic.twitter.com/vDOlEIMFK0

The number of protesters appeared to grow on Sunday as the migrant caravan is starting to lose favor among certain sectors of Mexico’s northern states.

Anti migrant protestors in Tijuana headed to shelter where 2,000-plus Central America. migrants are taking refuge to “kick them out.” pic.twitter.com/iYURtdFlZN

Police forces were able to secure the shelter and keep the protesters separated from the migrants, Maya Averbuch reported.

Anti-migrant protesters in Tijuana have now reached a police blockade and are surrounded by members of the media. #caravan pic.twitter.com/gK40SJgAFo

As Breitbart News reported, tensions escalated in Tijuana where some of the protests have turned violent in recent days. Law enforcement managed to keep the violence down to minor scuffles and shouting matches.

The migrants are part of a highly publicized caravan that began in mid-October. Organizers claim their ultimate goal was to reach the U.S border to claim asylum. The caravan led the U.S. government to deploy thousands of troops to border cities where they have been seen placing concertina wire along international bridges and other vulnerable areas along the border.