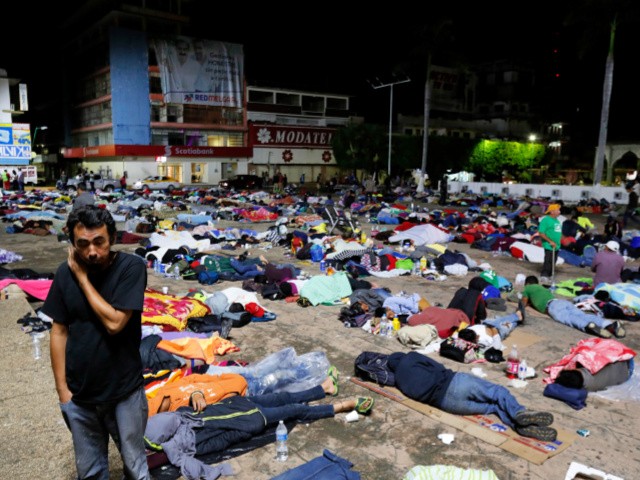 The Mexican El Universal news outlet is reporting that more than 14,000 Hondurans — not counting people from other countries who are marching toward the United States — are leaving that Central American nation to seek asylum here.

The news outlet reported that “municipal authorities,” the Catholic Diocese in the Mexican city of Tapachula, and the Mexican National Migration Institute (INM) provided the 14,000 figure.

“The first group walked for 37 kilometers from Ciudad Hidalgo to Tapachula on Sunday afternoon and was comprised by 5,333 children, women and men,” El Universal reported.

Later that afternoon 3,000 more men, women and children started “to walk under the rain.”

“Meanwhile, there are 3,000 children, women and men in the Ciudad Hidalgo International bridge, shared by Mexico and Guatemala, who are looking to enter Mexico with documents provided by the INM,” the news outlet reported.

Showers and toilets were also provided, according to the report.

The report also said the local officials were providing shelter, food, water, and even medical treatment as the Mexican Health Ministry is “vaccinating the children and carrying out blood tests.”

The report concluded with Guatemalan officials saying that they expect 3,000 to 4,000 more people to begin the trip soon to the Mexican border with the United States.

As Breitbart News reported, President Donald Trump has condemned what most sources cite as more than 7,000 migrants forcing their way through Mexico to their final destination, the United States.

Thus far, Mexican authorities have not been able to stop the massive group of people.

Sadly, it looks like Mexico’s Police and Military are unable to stop the Caravan heading to the Southern Border of the United States. Criminals and unknown Middle Easterners are mixed in. I have alerted Border Patrol and Military that this is a National Emergy. Must change laws!

“That is an assault on our country,” Trump said during a rally with supporters in Houston, Texas on Monday.

“We need a wall built fast, we have to protect our borders,” Trump said.