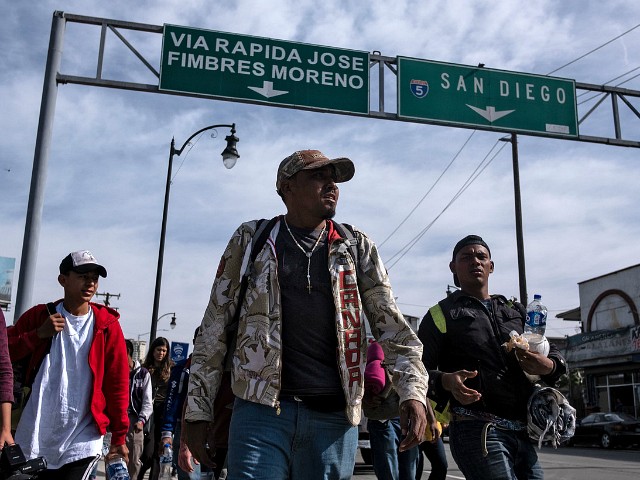 Mexican border officials are aiding U.S. border agents by helping them “meter” the number of migrants who can apply for asylum each day.

In Tijuana, for example, a U.S. reporter for the Desert Sun tweeted about the metering policy for migrants claiming asylum:

The metering is vital because it can operate alongside other asylum reforms to reduce the number of migrants who are released into the U.S. economy before their claims for asylum are heard by U.S. judges.

The most important of those other reforms is President Donald Trump’s November asylum reform which promises a limited form of asylum — “witholding of removal” — and possible fast-track deportation for migrants who are caught sneaking across the border.

Border “Metering allows them to regulate the [asylum-seeking] people so [border agencies] don’t get overwhelmed,” said Andrew Arthur, a former immigration judge who now works with the Center for Immigration Studies. If the metering continues, and the agencies have enough asylum officers, detention beds and other resources, they may be able to reduce catch-and-release practices for migrants who ask for asylum at the ports of entry, he said.

We’ve heard it anecdotally since border-wide metering began in May. It’s less a San Ysidro thing and more the smaller POEs in RGV. To give some data, last month only 1,003 family units & UACs admitted in South Texas; avg. 32/day across all Laredo Sector POEs. So 2-4 families/day.

Trump’s November 9 withholding of removal reform is intended to block and deport the other stream of asylum-seekers — those who cross the border illegally and then ask for asylum.

If the metering and withholding of removal policies are allowed to continue, they may work together to end the catch-and-release of migrants that allows the cartels’ to run their profitable, migrant-smuggling, labor-trafficking business into the United States.

The cartels need catch-and-release to ensure that their muggled migrants can get U.S. jobs, pay their smuggling bills owed to the cartels, and then pay for additional smuggling of other family members.

If the new policies reduce the daily number of migrants who get to the border to legally ask for asylum, border agencies will be better able to end the catch-and-release practice which funds the cartels’ business.

One problem for the DHS is the growing public opposition in Tijuana to the expanding backlog of migrants on the Mexican side of the border. The opposition may force Mexican officials to end their cooperation with the metering process.

Also, U.S. pro-migration progressive and business groups oppose the metering policy and are asking judges to quickly outlaw the policy.

David Bier, an advocate at the business-funded, pro-migration Cato Institute, argues that the metering policy is illegal. “Congress unequivocally wanted no limits on asylum, yet the government has created one anyway,” he wrote on November 14, adding:

Internal [agency] documents released as a result of a lawsuit show that the Department of Homeland Security (DHS) told ports of entry that “if you determine that you can only process 50 aliens at a time, you will request that the [Mexican government] release only 50. If [Mexico] cannot or will not control the flaw, your staff is to provide the alien with a piece of paper identifying a date and time for an appointment and return [them] to Mexico.” It is illegal to return someone who has a credible fear of persecution.

DHS has stationed its agents at the exact U.S.-Mexico borderline in front of the port of entry, pushing anyone coming to request asylum legally back into Mexico. If immigrants make it onto U.S. soil, that’s supposed to entitle them to a hearing. But even when they cross the official line, officers ignore their pleas and tell them to go away. Trying to walk past them is a criminal offense.

In October 2018, the government admitted 4,177 asylum seekers in family units—that is 135 people daily—at ports. Across 48 U.S.-Mexico ports of entry, that amounts to 2.8 family units daily at each port. The most family units allowed at ports per day during the Trump administration has been 3.8. The unpublicized limit is then an average of between 2.8 and 3.8 per day.

Pro-migration groups are suing the federal government to block the metering policy which they dub “the turnback policy”:

The plaintiffs in the [metering] case are Al Otro Lado, a non-profit legal services organization that serves indigent deportees, migrants and refugees in Los Angeles and Tijuana, along with six courageous asylum seekers who experienced CBP’s unlawful conduct firsthand. Their experiences demonstrate that CBP uses a variety of tactics – including misrepresentation, threats and intimidation, verbal abuse and physical force, and coercion–to deny bona fide asylum seekers the opportunity to pursue their claims.