Left-wing Hollywood activist Alyssa Milano, one of the founders of the #MeToo social media movement, is expressing support for former vice president Joe Biden as the potential 2020 contender faces blowback over his previous awkward interactions with women.

“I am proud to call Joe Biden a friend,” Milano tweeted with a photo of her and Biden. “He has been a leader and a champion on fighting violence against women for many years, and I have been fortunate to accompany him to events with survivors where he has listened to their stories, empathized with them, and comforted them.”

I am proud to call Joe Biden a friend. He has been a leader and a champion on fighting violence against women for many years, and I have been fortunate to accompany him to events with survivors where he has listened to their stories, empathized with them, and comforted them. pic.twitter.com/cI0jsKlu3P

Milano praised Biden as a “warm” and “generous” person who “believes [it’s] on all of us to pay attention to women’s stories and experiences.”

3. Biden started Its On Us because he believes to meaningfully change our culture, everyone – including those often left out of the conversation like college athletes and fraternity brothers – needed to be part of the movement.

The actress then turned her attention to Biden’s first accuser, Lucy Flores, who alleged last week that the former vice president kissed the back of her head and smelled her hair at a 2014 campaign event. “I respect Lucy Flores’ decision to share her story and agree with Biden that we all must pay attention to it. But, just as we must believe women that decide to come forward, we cannot assume all women’s experiences are the same,” she wrote. Flores has called Biden’s behavior “problematic” and disqualified him from seeking the White House.

5. I respect Lucy Flores’ decision to share her story and agree with Biden that we all must pay attention to it. But, just as we must believe women that decide to come forward, we cannot assume all women’s experiences are the same.

On Monday, Amy Lappos, a former congressional aide to Rep. Jim Himes (D-CT), became the second woman to accuse Biden of unwanted touching. “He put his hand around my neck and pulled me in to rub noses with me. When he was pulling me in, I thought he was going to kiss me on the mouth,” she told The Courant. The alleged incident is said to have occurred during a 2019 political fundraiser in Greenwich, Connecticut.

Milano’s swift defense of Barack Obama’s number 2 draws a stark contrast to her reaction to sexual misconduct allegations against then-Supreme Court nominee Brett Kavanaugh. In a video produced by the progressive news outlet “Now This,” the actress urged her fans to “bang down” their senators’ doors to prevent Kavanaugh’s confirmation — — despite a lack of evidence corroborating the decades-old allegations against the judge by California professor Christine Blasey Ford and others.

In an opinion-editorial for Variety, Milano wrote Kavanaugh’s confirmation would “institutionalize sexual violence.” Milano even attended Kavanaugh and Blasey Ford’s testimonies, where the two offered dueling accounts of the night in which the judge was accused of wrongdoing. 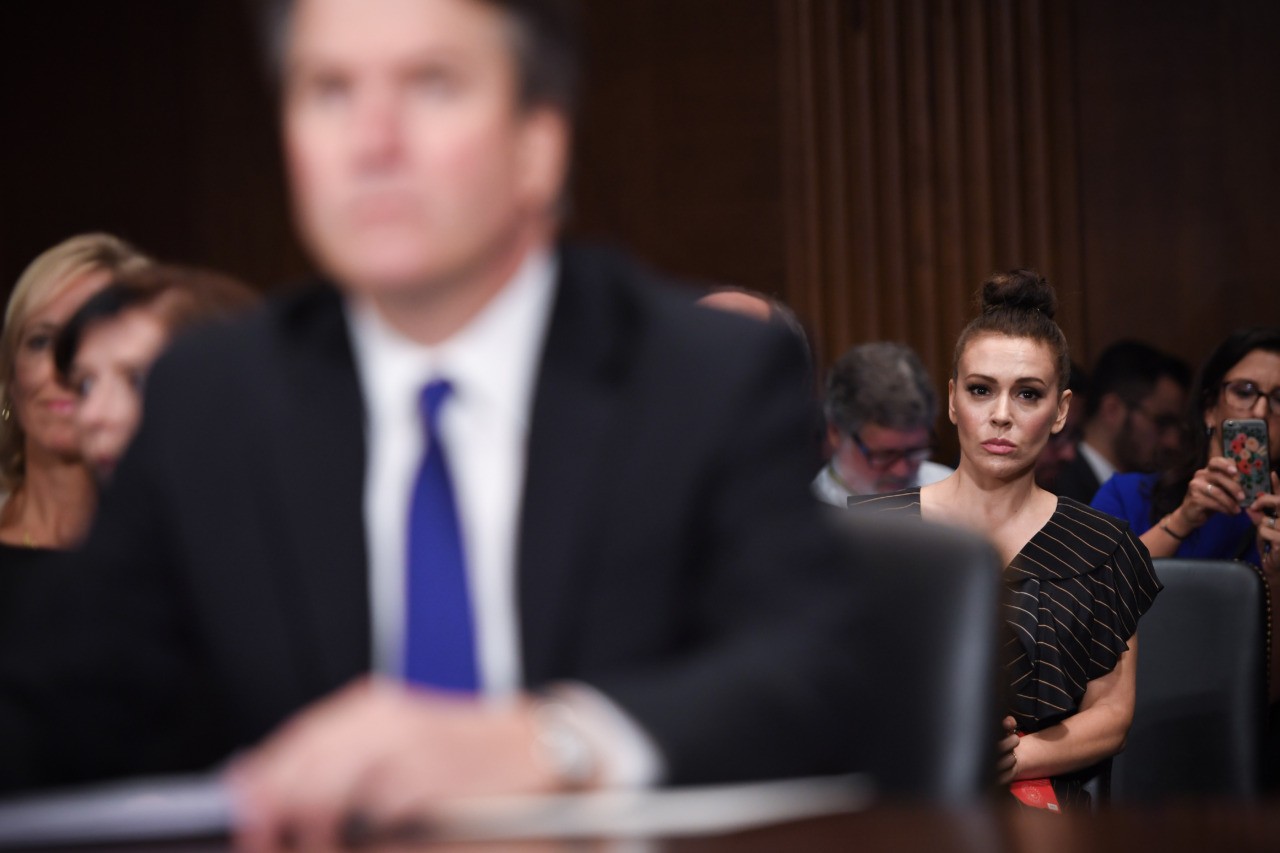 In a statement Sunday, Biden said it was never his intention to make women feel uncomfortable and if he did so, “I will listen respectfully.”

“I will also remain the strongest advocate I can be for the rights of women,” said the former vice president. “I will fight to build on the work I’ve done in my career to end violence against women and ensure women are treated with the equality they deserve. I will continue to surround myself with trusted women advisers who challenge me to see different perspectives than my own. And I will continue to speak out on these vitally-important issues where there is much more progress to be made and crucial fights that must be waged and won.”

Biden spokesman Bill Russo on Monday issued another statement addressing the controversy surrounding photos of the possible 2020 candidate interacting awkwardly with women, blasting some of them as “smears and forgeries.”

“The Vice President has issued a statement affirming that in all the many years in public life that he has shaken a hand, given or received a hug, or laid his hand on a shoulder to express concern, support; or reassurance, he never intended to cause discomfort,” said Russo. “He has said that he believes that women who have experienced any such discomfort, regardless of intention, should speak and be heard, and that he will be among those who listen.”

“But the important conversation about these issues are not advanced, nor are any criticisms of Vice President Biden validated, by the continued misrepresentation of the Carter and Coons moments, or a failure to be vigilant about a cottage industry of lies,” he added.