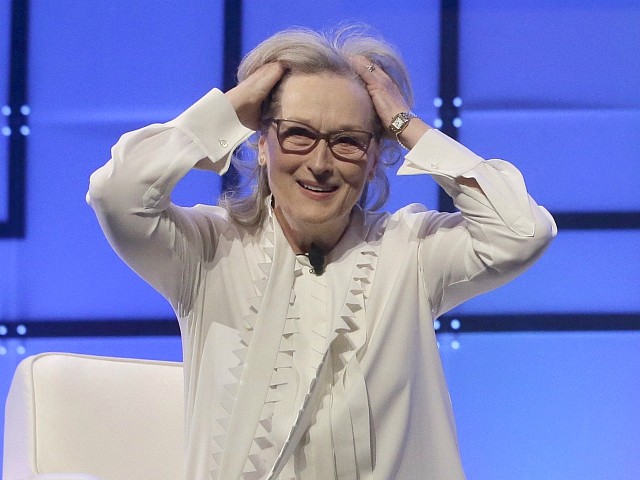 Speaking at An Evening with Stephen Colbert at Newark’s New Jersey Performing Arts Center Saturday, Oscar-winning actress Meryl Streep insisted that she is “scared” in Donald Trump’s America — mostly because she thinks Trump is dangerous.

During the Saturday evening event, Streep said she fears Trump because, like any parent, he will do “anything” to protect his children, Variety reported.

“I’m scared by (Trump),” Streep told Colbert. “By his possibility. I empathize with him. I can’t imagine what his 3 a.m. is like. There is a gathering storm. Everybody feels it. He feels it. His children are in jeopardy, and I feel that. I think, what if my children were jeopardy? I would do anything. Anything! To get them out of trouble. So we should be afraid.”

Presumably, the Mama Mia actress was referring to the fact that special counsel Robert Mueller’s investigation has targeted some of President Trump’s sons in his interminable, meandering, and unfocused investigation into “Russia collusion.”

Speaking of the Trump scions, Donald Trump Jr. himself slammed Streep early this year when he ridiculed the idea that Streep was the “only person in all of Hollywood who didn’t know Weinstein was a serial assaulter.”

Amazing that the only person in all of Hollywood who didn’t know Weinstein was a serial assaulter (of course she did) has an opinion on this. https://t.co/2h62gYWeby

Streep has been making a hash of politics for decades. As far back as 1989, Streep “testified” before Congress about the “dangers” of the food additive Alar based on her years of expertise because she played a farmer in a movie. The hysteria over the chemical ended up costing the apple industry $100 million, but years later, scientists found out that Alar was not at all harmful despite the scare whipped up by Streep and her cohorts.