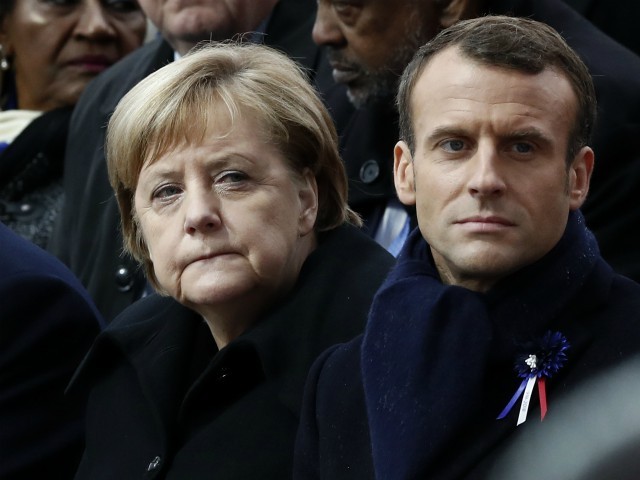 Angela Merkel and Emmanuel Macron are set to deepen Franco-German ties by signing a “twinning” treaty which has been criticised as an “erosion” of national sovereignty.

The pro-open borders German chancellor and globalist French president are set to formalise their already close co-operation with shared defence, foreign and economic policy, and business regulations in what is seen as a prototype for a “more sovereign, united” Europe, The Times reports.

As European Union member states, the countries have already abandoned many of their sovereign rights by ditching their national currencies for the euro, agreeing to open borders within the bloc, and submitting to European courts as their highest legal arbiter.

The new treaty, styled on the 1963 Élysée Treaty of post-war reconciliation, will also encourage the formation of border town “Eurodistricts” where French and German towns will merge public transport networks and utilities.

The countries also plan to coordinate their positions in Brussels and lobby the United Nations to give Germany its own seat on the Security Council — France holding one of five permanent positions in the influential group.

Late last year, Germany called on France to give up its seat to the EU so the bloc could “speak with one voice” — a request France rejected. Germany began her two-year stint in the Security Council as one of ten non-permanent members in January, with Mrs Merkel telling her country in her New Year’s address that she would keep pushing for “global solutions” to the world’s problems, including mass migration and climate change.

“Both states will deepen their cooperation in foreign affairs, defence, external and internal security and development and at the same time work on strengthening the ability of Europe to act independently,” says the text of the treaty, as seen by Reuters.

“Both states will deepen the integration of their economies towards a German-French economic area with common rules,” the document added.

President Macron’s office confirmed the extension of the Élysée Treaty would enable the two countries to take a lead on handling “the challenges they will be confronted with in the 21st century,” adding, “[We] envisage deepening our engagement in favour of security and prosperity of our peoples in the framework of a more sovereign, united and democratic Europe.”

The developing relationship between Macron and Merkel blossomed at the end of last year, when the French president announced that the “Franco-German couple” would become the “heart” of Europe and work to stop the world “descending into chaos” — making not-so-thinly veiled criticisms of U.S. President Donald J. Trump’s policy of putting the American electorate first, rather than globalist endeavours.

Tensions between the nationalist-patriotic U.S. president and the globalist-progressive French premier came to a head when in early November Macron called for a “real European army” to protect the continent from threats from China, Russia, and the United States itself — a NATO ally.

Merkel enthusiastically backed Macron a week later, calling for a “real, true European army” — the prospect of which was often dismissed as a “dangerous fantasy” by Remain campaigners in the run-up to the British vote to leave the bloc.

The treaty is set to be signed in the German city of Aachan, which lies on the multi-nation border with Belgium and the Netherlands, on January 22nd, and the agreement will be ratified at both the French and German parliaments.

There is profound significance to having chosen Aachen, known in French as Aix-le-Chapelle, the ancient Roman spa city that has crossed hands between French and German possession for centuries.

The city was also the residence and burial place of the early medieval ruler Charlemagne, the first Holy Roman Emperor dubbed the “Father of Europe” for having united the western part of the continent by the 9th century.

Alexander Gauland, leader of the populist, anti-mass migration Alternative for Germany (AfD), has condemned the union as  a further “erosion of our national sovereignty.”

While Germany and France are uniting to create progressive-globalist union, nationalist and populist groups are working to reshape the EU into a Europe of independent nations ahead of European Parliament elections in May, with right-populist Italian Deputy Prime Minister Matteo Salvini meeting with Poland’s conservative leadership in Warsaw on Wednesday.