First Lady Melania Trump joined children at a hospital from around the globe for Valentine crafts at the NIH Children’s Inn where one boy from Kenya gifted her a necklace to match his bracelet.

Amani, 13, of Mombasa, Kenya, gifted the first lady a necklace with the words he picked out, “faith” and “hope,” to match a bracelet that he was wearing, which he showed her. 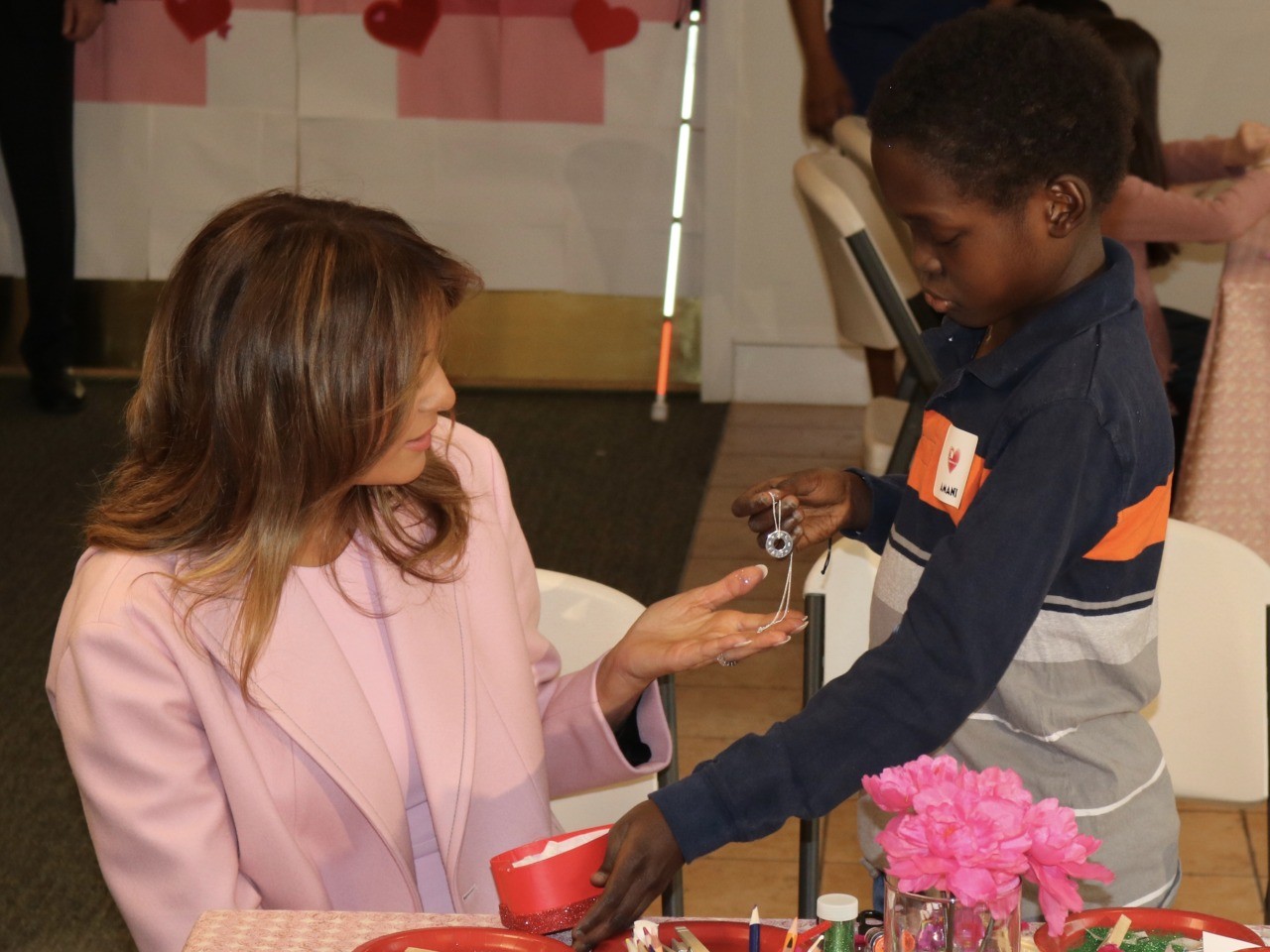 Amani of Mombasa, Kenya, presents the first lady with a necklace matching the bracelet he wears (Michelle Moons/Breitbart News) 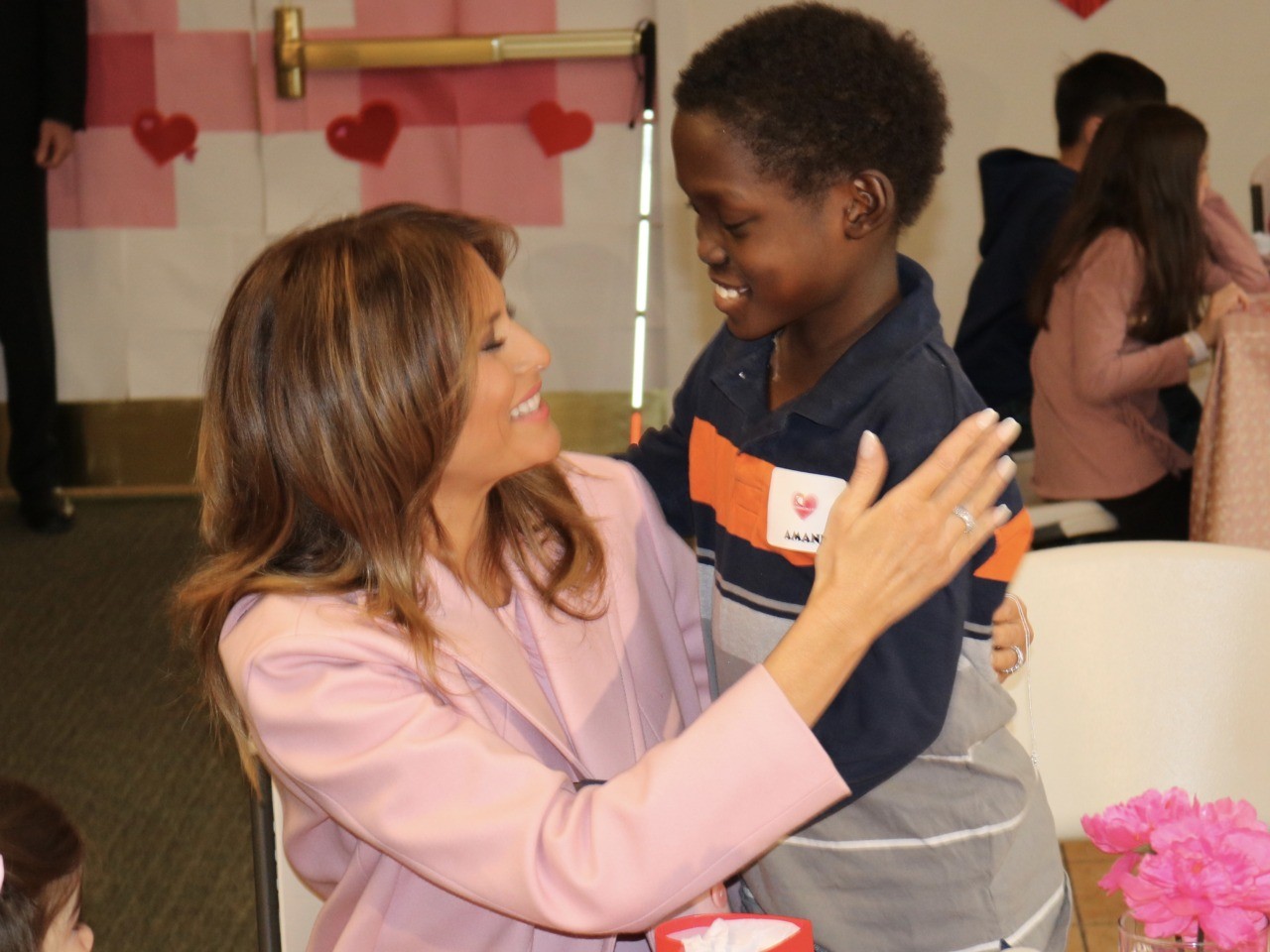 Children participated in five different crafting stations: candy box decorating, candy bar, snow globes, favorite things and map, and candygrams. Children from two years old to age 24 came to the hospital from not only the United States, but as far as Kenya, Azerbaijan, Peru, China, and Jamaica.

Mrs. Trump first greeted Amber, 9, of San José, California, upon her arrival. They both joined a group of children at the first candy box decorating station where she asked one of the kids: “Do you want to show me what to do?” They began decorating, and she asked one little girl what she likes to do. The girl said she likes to play with friends. 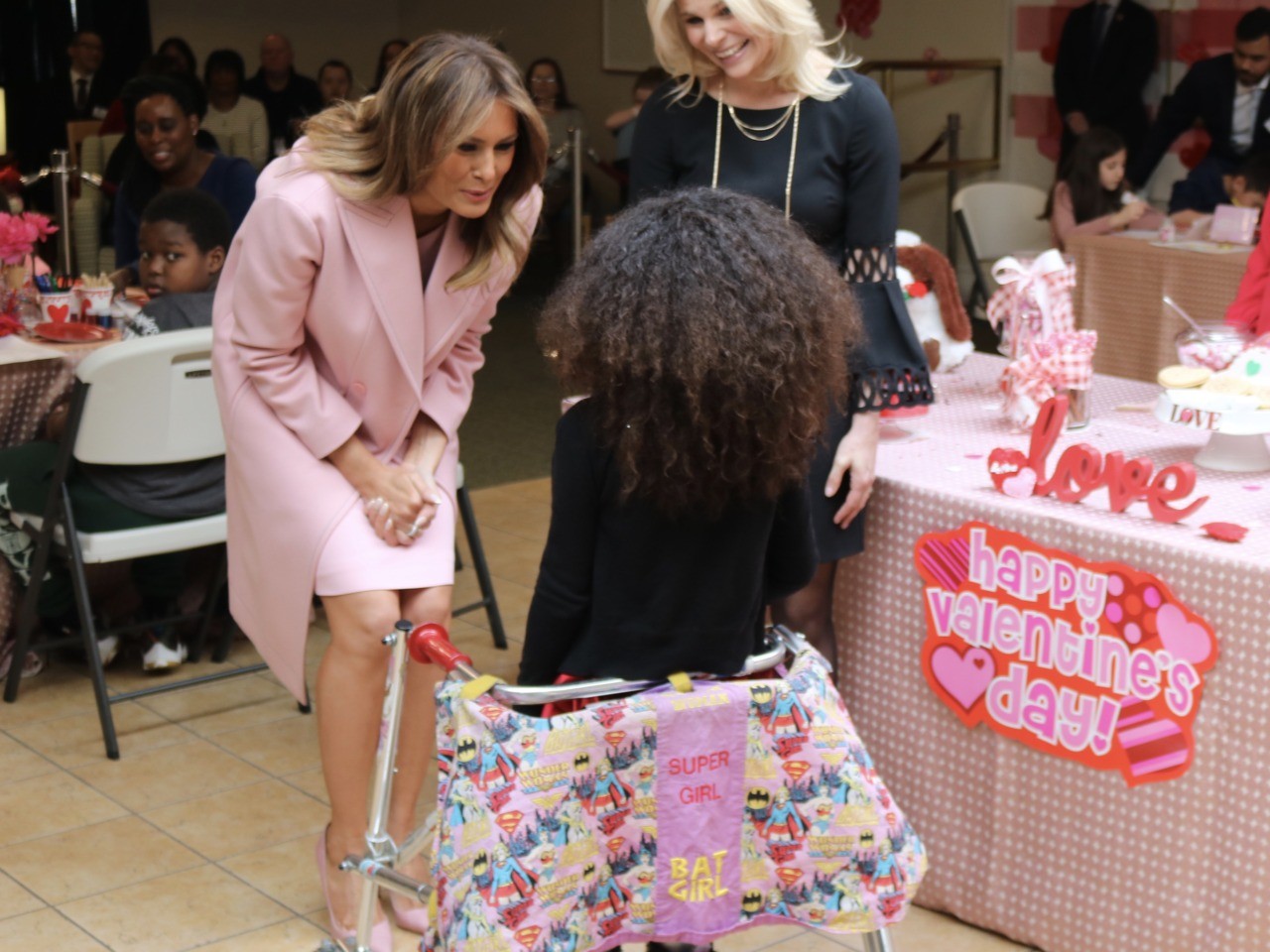 Amber pointed to the first lady’s pink coat and Mrs. Trump returned a compliment of the little girl’s outfit. Trump then looked for a pink marker for the little girl, saying to the other children, “she loves pink.” 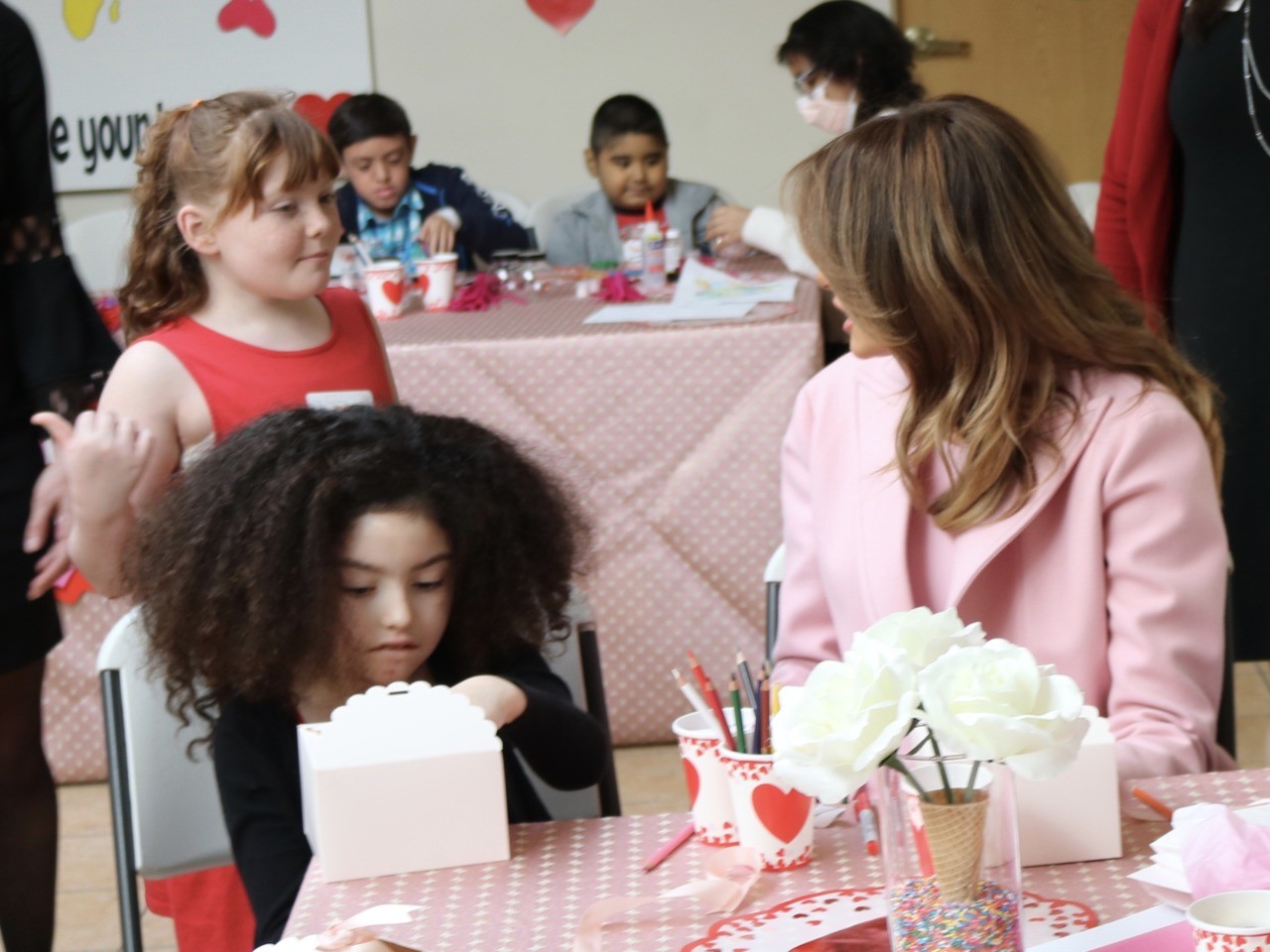 Young girl tapped the first lady on the shoulder coaxing Mrs. Trump to join her at the next station, the candy bar (Michelle Moons/Breitbart News) 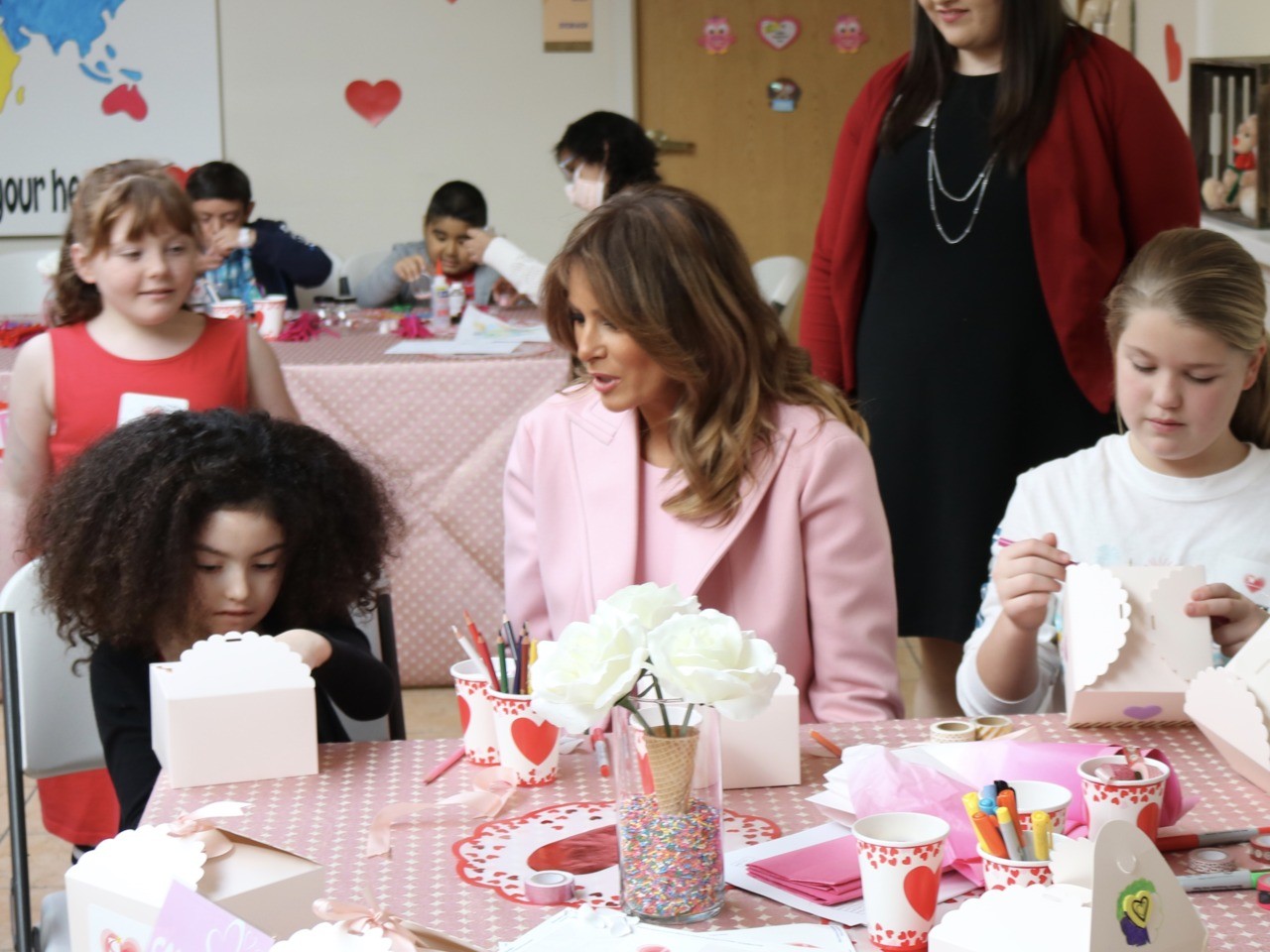 At the candy bar, Mrs. Trump helped Avery, 10, of Festus, Missouri, pick out candies to fill her box. The first lady then helped Christina, 24, fill hers with pink, red, and white chocolate candies, pink dipped pretzel sticks, gummy hearts, and sweet tarts candies. Amber from the candy boxes table then joined Mrs. Trump at the candy bar where they worked together deciding which candies Amber wanted to fill her box with, and Mrs. Trump gathered the candies for her. One by one, the kids lined up with the boxes they had decorated to fill them with a mix of 12 different candies, cookies, and treats.

At the snow globe station, the first lady helped pour a liquid into the snow globes the children had prepared, then they sealed them and flipped them over to see the glitter fill the globe. She talked with little Abigail, 12, who turned over the first completed snow globe. 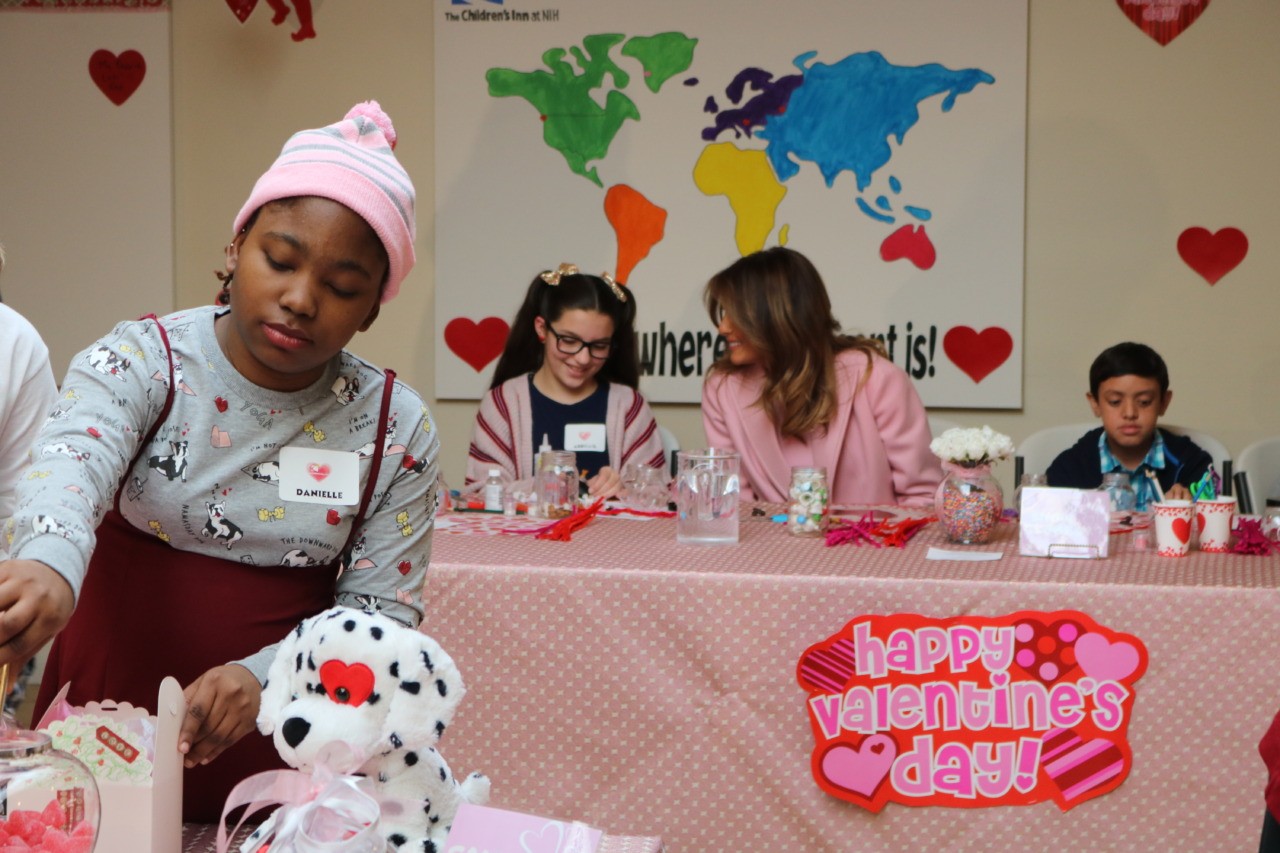 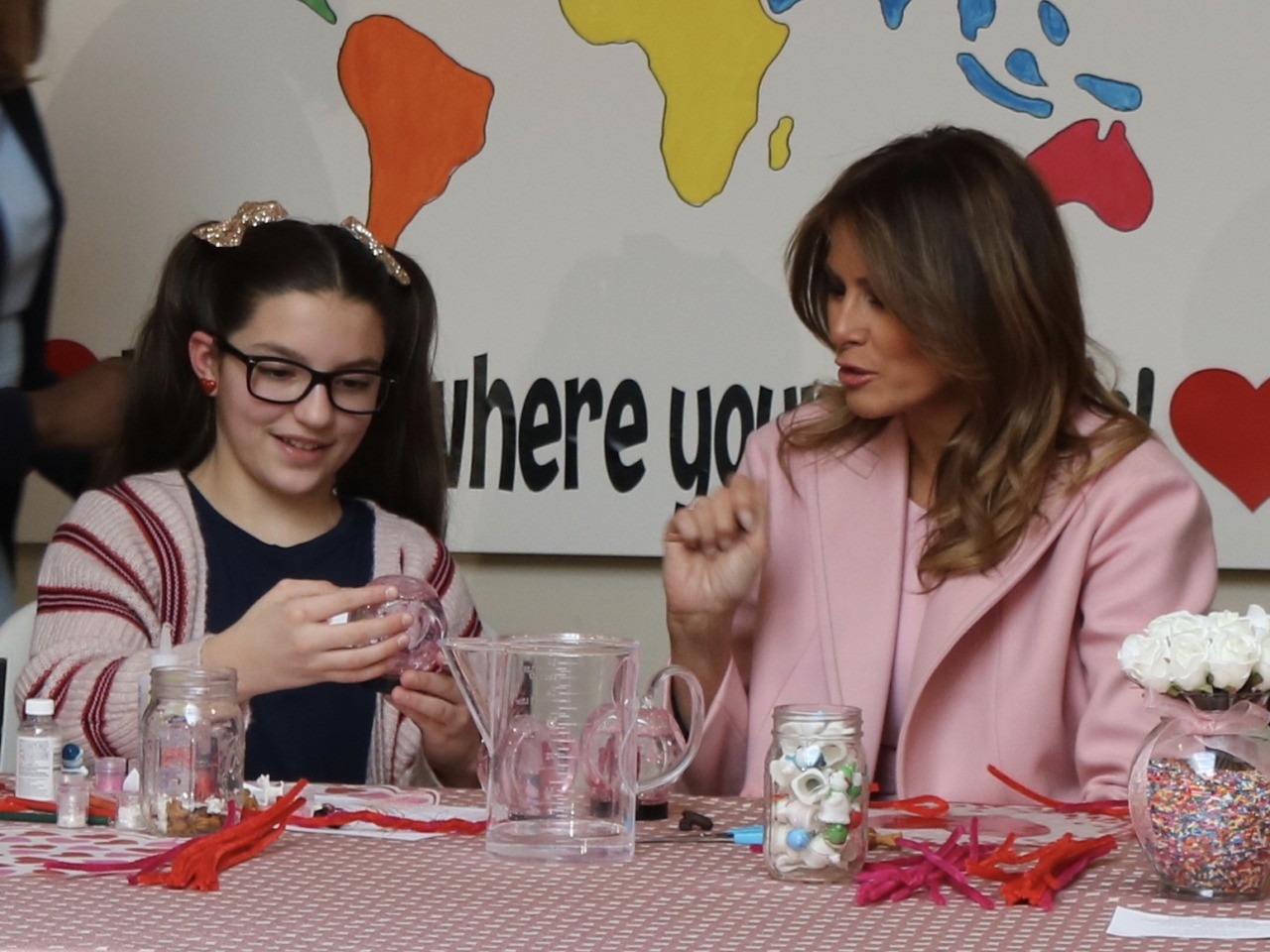 Abigail, who suffers from periodic fever syndrome, decorated a snow globe, the first lady added liquid to it, they closed it off and flipped it over sending the sparkles swirling (Michelle Moons/Breitbart News) 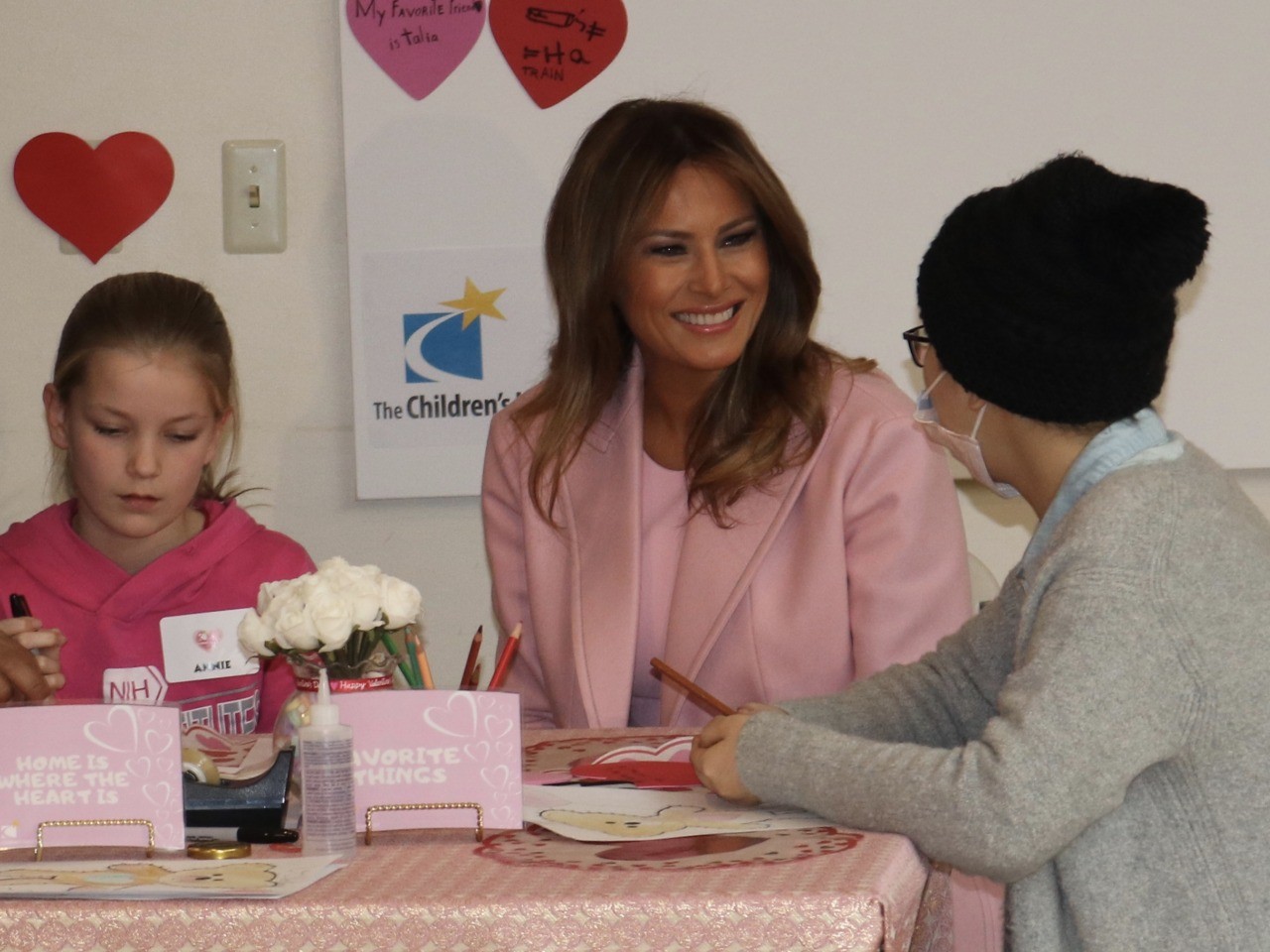 At the candy grams station, Mrs. Trump spoke with Amani, who worked with Mrs. Trump on his craft. The first lady remarked, “this is a big project.” She told two girls at the table how beautiful their candygram was. Trump twisted a red pipe cleaner around her finger, then cut off the end before attaching it to a clothespin as part of the crafting. The first lady told Serena, 22, “I love your scarf and jacket. You’re very fashionable.”

Amani gifted Mrs. Trump with a circular necklace presented in a heart-shaped box and bouquet of white roses — he showed her his own bracelet and that the necklace and bracelet matched. “It’s so beautiful. Thank you,” said Mrs. Trump. She called it such a “special gift” and embraced the little boy. 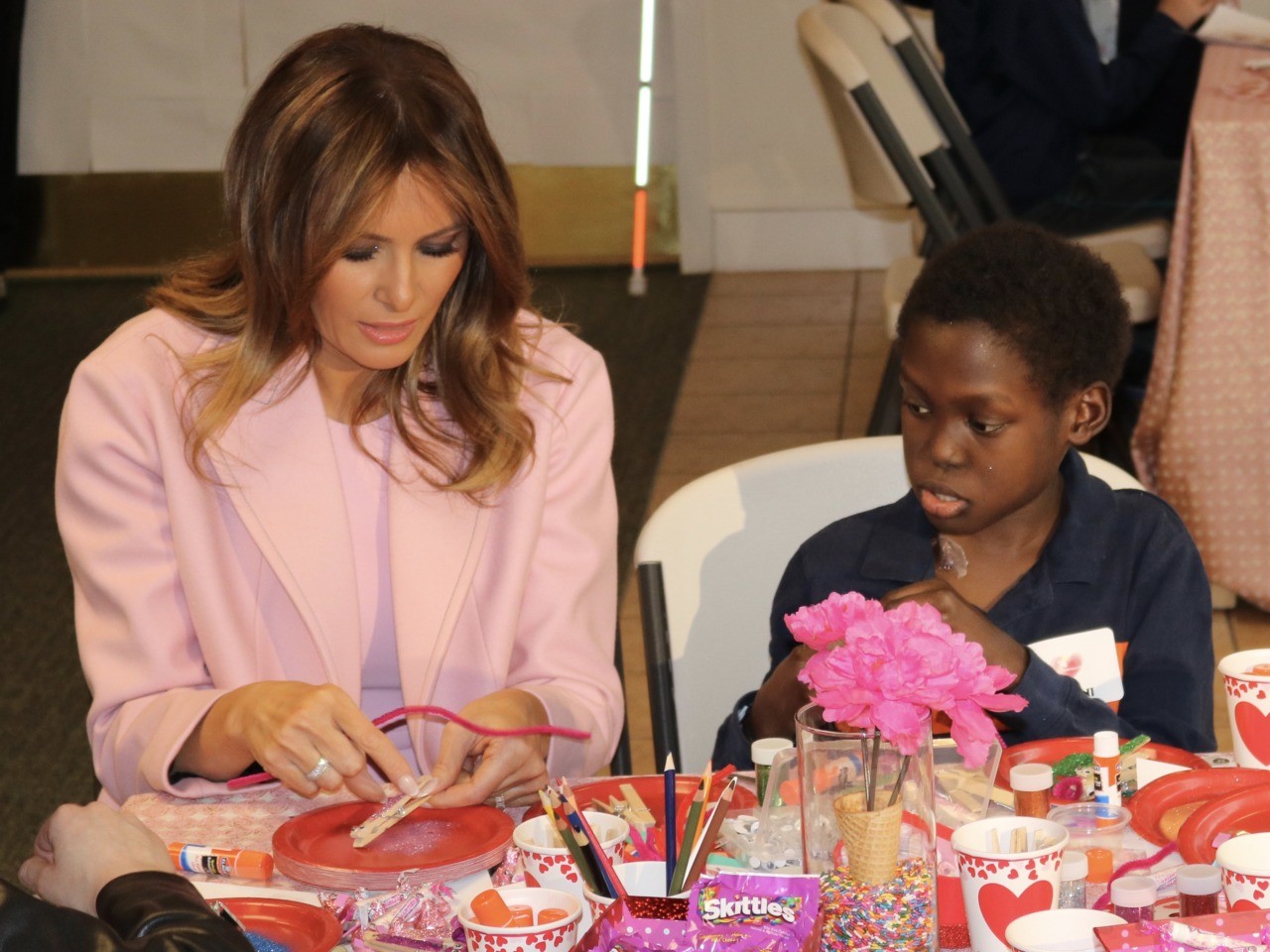 Amani, 13, has sickle cell disease and is preparing for a bone marrow transplant from his 8-year-old sister. He decorated candy grams with the first lady (Michelle Moons/Breitbart News)

Amani told the first lady about his bone marrow transplant and his eight-year-old sister Amana with him who is his marrow donor. 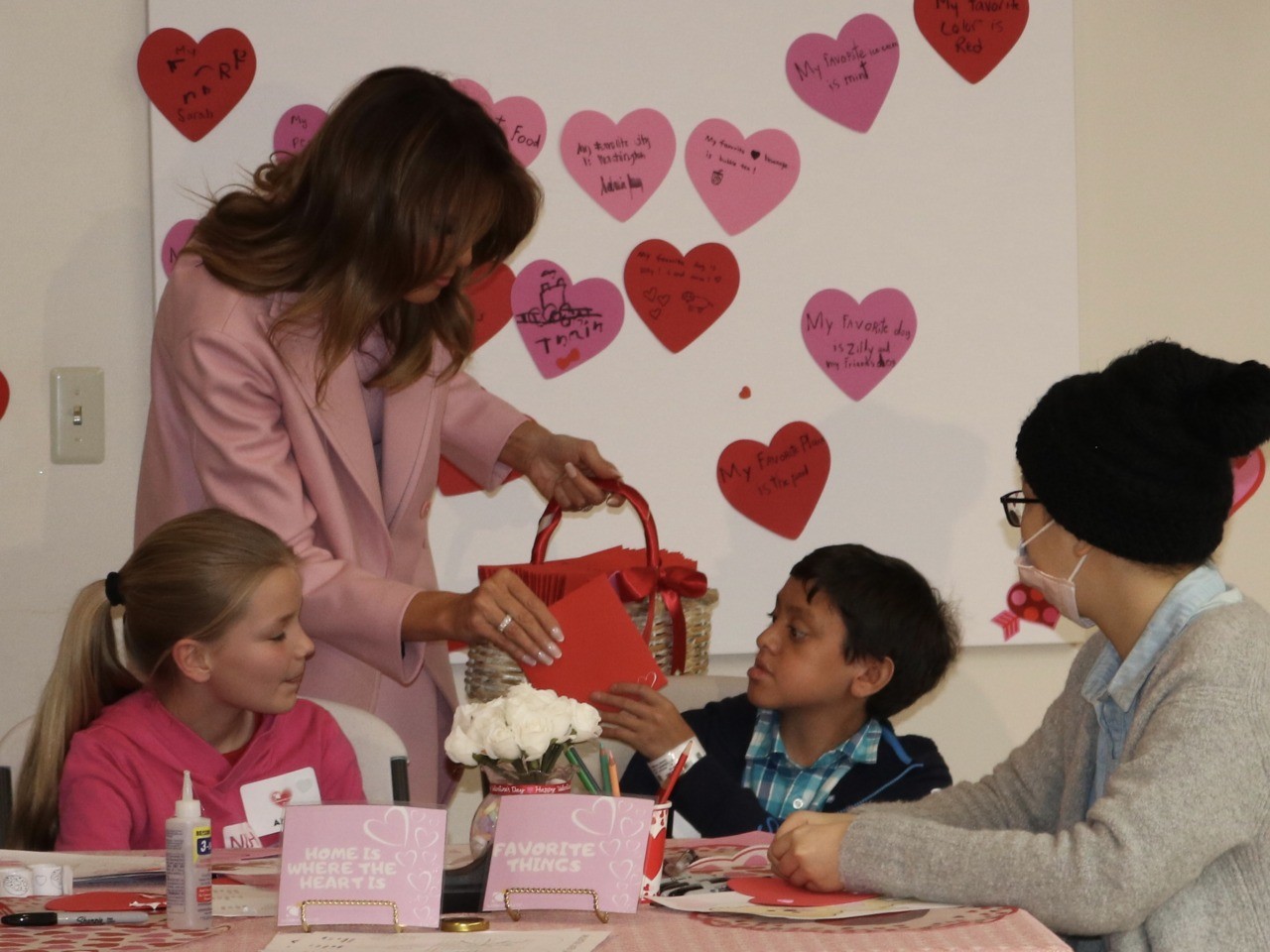 The first lady presented each of the children with Valentine’s Day cards before leaving.