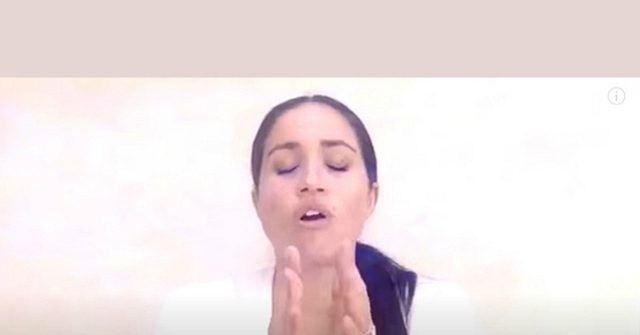 Meghan, Duchess of Sussex, has spoken out on George Floyd’s death in a video message to pupils at her former high school. She’s the latest celebrity to pound the drum and push the theme that all Americans must speak out.

“What we have seen in our country, our state and in our hometown of LA has been absolutely devastating,” said Meghan, referring the protests-turned-riots which have spread from Minneapolis, where Floyd died, the United States, across the Atlantic to her husband’s home country of Great Britain.

“I wasn’t sure what I could say to you. I wanted to say the right thing and I was really nervous that I wouldn’t or it would get picked apart and I realised the only wrong thing to say is to say nothing because George Floyd’s life mattered,” the U.S.-born Meghan, formerly Meghan Markle, said in her address, which was also published in Essence, a lifestyle magazine aimed at black women.

The Duchess also referenced her childhood memories of the LA riots in the 1990s, which she said were “also triggered by a senseless act of racism,” namely the beating of Rodney King by police officers following a high-speed car chase.

“I remember the curfew and I remember rushing back home and on that drive home, seeing ash fall from the sky and smelling the smoke and seeing the smoke billow out of buildings,” she said, after the police officers’ initial acquital for assault and excessive force resulted in riots followed by general disorder and looting. “I remember seeing men in the back of a van just holding guns and rifles. I remember pulling up the house and seeing the tree, that had always been there, completely charred. And those memories don’t go away.”

But, the former Suits actress continued, “as diverse, vibrant, and opened minded as I know the teachings are at Immaculate Heart, I know you know that Black Lives Matter.”

“You’re going to use your voice in a stronger way than you have ever been able to because most of you are 18 – or you’re turning 18 — so you’re going to vote,” she added. “You’re going to have empathy for those who don’t see the world through the same lens that you do. You’re ready. We need you and you’re prepared.”

Floyd, who was reported to be suffering from Covid-19, coronary artery disease, hypertensive heart disease, and the after-effects of fentanyl and methamphetamine use, died after being pinned by the neck by a white police officer for several minutes even as bystanders urged the cop to relent. The officer was subequently charged with third-degree murder and negligent manslaughter.

The Duchess, meanwhile, did not spell out how she believed the graduating pupils she spoke to should use that vote, but before she joined the Royal Family and adopted a modicum of the political neutrality which is expected of its members, she was a vocal critic of President Trump.