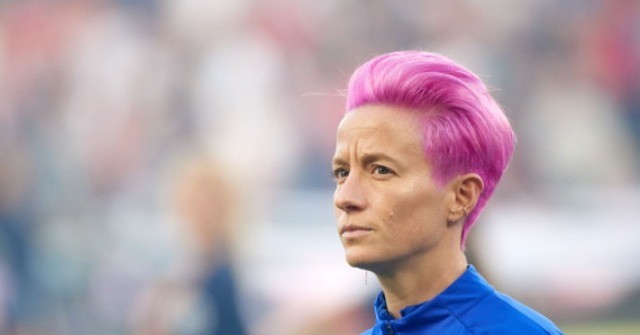 More than 500 former and current female athletes filed an amicus brief Monday in which they called upon the U.S. Supreme Court to reject a Mississippi law that would make abortions performed after 15 weeks of pregnancy unlawful.

The athletes stated in their brief they are “united in their deeply-held belief that women’s athletics could not have reached its current level of participation and success” without the right to abortion via the right’s creation through Roe v. Wade and subsequent Supreme Court decisions.

The female athletes assert it is “the right to access safe and legal abortion” that has made women’s sports “the enormous success they are today.”

“I am honored to stand with the hundreds of athletes who have signed onto this Supreme Court brief to help champion not only our constitutional rights, but also those of future generations of athletes,” soccer star Megan Rapinoe said in a statement, reported USA Today.

“Physically, we push ourselves to the absolute limit, so to have forces within this country trying to deny us control over our own bodies is infuriating and un-American and will be met with fierce resistance,” she added.

Female Athletes Don’t NEED Abortion, says Students for Life of America, But They Need to Know their Rights and Resources https://t.co/xKRqRe4Xft

The signatories include over 500 former and current athletes who say they must be able to maintain their “bodily integrity and decisional autonomy” when it comes to their individual careers and for women’s sports in general.

In a footnote, the athletes qualify:

Among those who signed onto the brief are 26 Olympians, 73 professional athletes, and 276 college athletes, as well as players’ unions for both the Women’s National Basketball Association (WNBA) and the National Women’s Soccer League (NWSL).

In addition to Rapinoe, WNBA stars Sue Bird, Breanna Stewart, and Diana Taurasi are among the most well-known names who signed the brief.

The Court announced in May it will decide in the Mississippi case “whether all pre-viability prohibitions on elective abortions are unconstitutional” in the United States.

The question poses the most significant challenge since 1992 to the right to abortion created by the Supreme Court in Roe v. Wade.

Oral arguments have been scheduled for December 1.

Team USA swimmer and Olympic gold medalist Crissy Perham revealed in the brief that she had an abortion while in college.

Mississippi Governor Tate Reeves will sign a bill into law protecting female athletes in high schools and colleges from competing against men. https://t.co/uuS3vhOaM6

“My life would be drastically different if I had been pregnant and forced to sit that [championship] race out, because that race changed the course of my life,” Perham wrote.

“I made the choice that was right for me and my future, and I stand by my decision,” she added. “That choice ultimately led me to being an Olympian, a college graduate, and a proud mother today.”

In the amicus brief, the athletes also claim that if the Court overturns the Mississippi abortion law, gender equality would be affected as well.

They argue in the brief:

If the State compelled women athletes to carry pregnancies to term and give birth, it could derail women’s athletic careers, academic futures, and economic livelihoods at a large scale. Such a fundamental restriction on bodily integrity and human autonomy would never be imposed on a male athlete, though he would be equally responsible for a pregnancy.

What a shame that Megan Rapinoe and 500+ female athletes don’t seem to know about their legal rights and the resources available to women experiencing pregnancy while competing.

Our Pregnant and Parenting Bill of Rights Project was created to confront that information deficit.

But Kristan Hawkins, president of Students for Life of America (SFLA), called the narrative of the female athletes “a shame” in that it reveals they “don’t seem to know about their legal rights and the resources available to women experiencing pregnancy while competing.”

The pro-life organization’s nationwide campaign aims to educate pregnant and parenting students about their Title IX rights on campus and in school athletic programs. The project seeks to inform students that they “cannot be discriminated against or face loss of scholarships, housing, athletic eligibility, or opportunity simply because of their pregnancy or parental status.”

“These pro-abortion athletes have misused the goodwill and respect they’ve earned through their careers to send a defeatist message to other women,” Hawkins said about their brief. “Telling women that they can’t succeed as mothers and athletes is the kind of pitch you’d expect from an abortionist or a manipulative coach, but not from a fellow champion.”

The case is Dobbs v. Jackson Women’s Health Organization, No. 19-1392, in the Supreme Court of the United States.