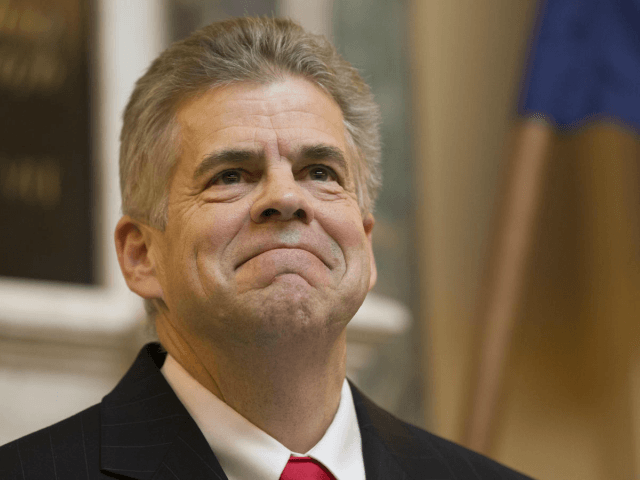 In January 2018, the Virginia House of Delegates unanimously elected Cox to serve as the Speaker of Virginia’s lower chamber. Kirk became the first Speaker in Virginian history from Colonial Heights and the first Speaker from Chesterfield County since the 1800s, as well as the first Speaker who was a public school teacher.

Before serving as Speaker, Cox was the Majority Leader from 2010 to 2018 and served as Majority Whip before then.

Cox made headlines last week when he delivered a dramatic Virginia House floor speech, citing the Bible in his vow to fight against Democrats’ push for late-term abortions.

The Virginia House leader said he was horrified last week when New York state passed a law to make it easier to obtain late-term abortions.

“I will never stop fighting for the promise of life, as long as I hold a gavel, as long as I can speak in this microphone,” Cox added, which led to Republican delegates clapping in thunderous applause.

The National Rifle Association Political Victory Fund (NRA-PVF) endorsed Cox for the 66th House district. The NRA-PVF gave him an “A” rating during the 2017 General Assembly term.

Eric Luper, the Virginia state liaison for the NRA, said regarding their endorsement of Cox, “We are proud to endorse Delegate Cox for reelection. He is strongly committed to Virginia’s hunters, sportsmen, and gun owners. We’re confident that he’ll continue his defense of our constitutional rights when reelected.”

The National Federation of Independent Business (NFIB) and the Virginia Farm Bureau Federation also endorsed Cox during the 2017 election.

Cox also expressed dismay by Virginia’s Medicaid expansion in the 2018 budget; however, he argued that they were able to implement a “robust work requirement” to ensure that Virginians do not become dependent on welfare. The Virginian also said that he remains concerned about the long-term fiscal impact of Medicaid expansion.

The budget also includes what I consider the most conservative set of reforms to Medicaid in the nation as part of a plan to expand healthcare coverage to working Virginians. Our plan gives hard-working people a path to self sufficiency through a robust work requirement, empowers them to be part of their healthcare decisions, and safeguards taxpayers by both requiring hospitals to fund the future cost of expansion and including an automatic safety switch to disenroll people if the federal government fails to keep its commitments.

The Virginia Republican also voted on several pieces of legislation that would ban sanctuary cities, which was a hot topic during the 2017 gubernatorial campaign.

Cox serves as the next in line for Virginia’s gubernatorial succession if Northam, Fairfax, and Herring were to resign amidst their scandals.

Herring faced controversy as Virginia Attorney General Herring admitted that he wore blackface at a college party in 1980 on Wednesday. In a statement Herring said he and two friends dressed up to look like rappers.

Herring was among the many politicians and public figures who called on Gov. Northam to resign, as he admitted to recently wearing blackface and his medical school yearbook featured two men– one in blackface and the other in Ku Klux Klan attire– in the photo.

Fairfax, next in line if Northam were to resign, has been accused of sexual misconduct, which he continues to deny.

On Monday, Cox said that he does not have any plans to oust Northam from the governor’s mansion.

“I think there’s a rightful hesitation about removal from office because obviously, you have to consider that to some degree you’re overturning an election,” Cox said.

The Virginia Republican also noted that Northam’s yearbook scandal does not rise to the threshold of impeachment which is why he suggested that instead, Northam should resign.

“That’s why we have called for the resignation,” Cox said. “We hope that’s what the governor does. I think that would obviously be less pain for everyone.”

If Northam, Fairfax, and Herring were to resign, Cox would serve as the next in line to serve as Acting Governor. The Virginia State Constitution reads:

Breitbart News’ Michael Patrick Leahy noted that as Northam’s scandal continues to erupt, many Republicans see an opportunity for the GOP to take back control of the state. Virginia’s changing demographics have shifted towards Democrats over the past couple of decades. Virginia elected its last Republican governor, Bob McDonnell, in 2009; the last Republican elected to the U.S. Senate was in 2002.

Leahy wrote, “The political bottom line is this: each day the Northam scandal continues to evolve, Republican prospects in Virginia continue to improve.”