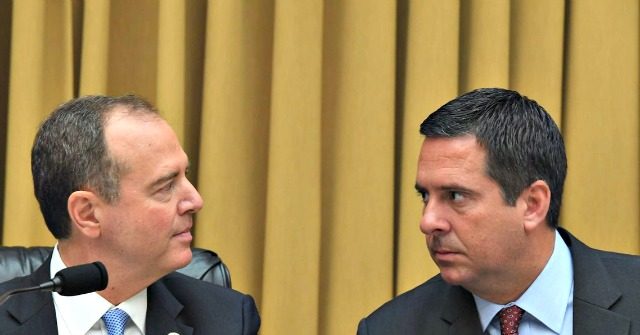 Nunes has been a target ever since he began investigating the FBI’s effort to conduct surveillance on members of the 2016 presidential campaign of President Donald Trump — an effort that lasted into the Trump presidency itself.

It was Nunes who revealed the fact that members of the outgoing Obama administration had “unmasked” the names of Americans who appeared in transcripts of surveillance of telephone conversations with foreign nationals. At least one of those names, former National Security Advisor Michael Flynn, was leaked illegally to the Washington Post, where his conversation with the then-Russian ambassador became part of the Russia “collusion” conspiracy theory.

The Los Angeles Times noted Saturday that Nunes had been investigated and cleared by the House Ethics Committee in 2017 after he was falsely alleged to have leaked classified information. The Times, however, used the fact that Nunes was investigated to bolster its theory that he was part of a “scheme” with Parnas.

In one passage, the Times claimed the ethics committee was “Republican-led” — ignoring the fact that the House Ethics Committee is the one committee in the House that has equal representation from both parties, precisely to avoid partisan investigations.

When Nunes released a memo in 2018 suggesting that the FBI had misled the Foreign Intelligence Surveillance Act (FISA) court, Democrats — led by then-Ranking Member Adam Schiff (D-CA) — attempted to dismiss his concerns. The media sided with Schiff — but last month, Department of Justice (DOJ) Inspector General (IG) Michael Horowitz revealed that Schiff had been correct, and that the FBI continued to mislead the FISA court by using the so-called “Steele dossier” to obtain warrants to spy on Trump associates after it already knew the dossier was entirely false.

Schiff did not cite any particular legal authority to have obtained the phone records — because there was none. The White House also disputed the accuracy of Schiff’s records, saying that a number he claimed was from the Office of Management and Budget (OMB) was a generic switchboard number.

Nunes did not deny that he might have spoken to Parnas on the phone, but did not recall any conversations with specificity; he said last week that he remembered talking by phone to Parnas but told him to contact his staff instead. CNN also accused Nunes of traveling to Vienna to meet with a former Ukrainian prosecutor with information to offer — though Nunes says he was in Benghazi, Libya, at the time and has since sued CNN for defamation for its report.

The media, rather than defend the First Amendment rights of a journalist who had been spied upon, or show curiosity about the abuse of the Intelligence Committee’s powers to smear a political opponent, largely sided again with Schiff.

The media have done so again with the latest allegations by Parnas, who released documents and phone records to the House Intelligence Committee last week after being granted permission to do so by the federal judge in his case.

The Times article, “Text messages point to Rep. Devin Nunes in Ukraine scheme at heart of Trump impeachment,” expands the allegations of Nunes’s involvement in the alleged “scheme.”

No longer is he accused simply of helping smear Yovanovitch. Now, Nunes is also included in a “scheme” to link Ukraine to interference in the 2016 election and to “to unearth dirt on [former Vice President Joe Biden].”

The “proof” is that Parnas sent information to Harvey. The idea that it might have been Nunes’s duty to find out about foreign interference in U.S. elections is not mentioned.

The Times takes the accusations against Nunes at face value, citing what it calls his “apparent role on the margins of the Ukraine saga.” Other outlets are doing likewise, as Democrats pressure Senate Republicans to call Parnas as a witness in President Donald Trump’s impeachment trial. It is not clear yet that the Senate will call any witnesses.