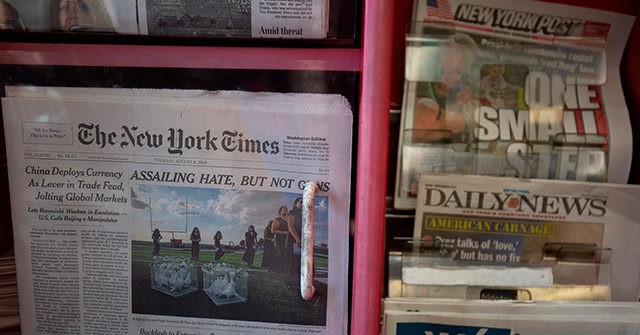 Dan Gainor, who leads Big Tech and free speech watchdog operations at the Media Research Center, testified before the Senate Judiciary Committee on the Journalism Competition and Preservation Act (JCPA) last week, warning lawmakers that far from benefiting the local news industry, the bill rewards the same national media outlets that are destroying it.

The JCPA, which Breitbart News has covered extensively, would create an antitrust exemption for media companies, protecting widely distrusted media companies from competition by allowing them to form a legal cartel to collectively bargain with Silicon Valley.

If the JCPA passes, big corporate media companies would be able to form a legal cartel that could strike deals with Facebook, Google, Twitter, and other tech giants that would prioritize their content to the detriment of podcasters, YouTubers, Substack authors, and other forms of independent media.

A line in the bill allows members of the state-sanctioned cartel to exclude any company that is not “similarly situated” to them from the benefits of their negotiations with the tech giants, giving the cartel wide leeway to exclude any news organization of their choice.

It also leaves out any journalist who does not have “a dedicated professional editorial staff” that publishes news content on “at least a weekly basis,” excluding independent journalists who run small or one-man operations.

Supporters of the bill, such as lead sponsor Sen. Amy Klobuchar (D-MN), claim it will help rescue the struggling local news industry, a point challenged by Gainor.

In his testimony, Gainor, who worked in local news for over a decade, pointed out that the organizations that stood to benefit the most are the same large national media companies that have contributed to the decline of local news.

“The JCPA allows big media companies to ignore antitrust laws and work together,” said Gainor. “That doesn’t fix the problem of having a big tech advertising cabal. It’s simply adding another cabal to negotiate with it. Allowing a few of the largest and most powerful media companies to act as proxies for others only ensures that big firms secure deals that benefit them.”

“We all want trustworthy, local journalism that helps inform the public as well as hold powerful people accountable,” continued Gainor “Except that’s not how corporate media have handled local journalism in the past. Local outlets were treated as cash cows. Big corporations milked them and slaughtered the remains. This law would only serve to support huge existing corporate media instead of independent media.”

Gainor also pointed out that the big national media companies that would benefit from the JCPA are wealthy enough to not need the help, and also have a habit of acquiring and then destroying the local newspapers that JCPA defenders claim the bill will protect.

“Corporate news organizations don’t need our help,” said Gainor. “The New York Times just spent $550 million in cash purchasing The Athletic, which according to journalist Aron Pilhofer, covers 270 plus sports teams in more than 47 local markets. The Times has placed itself in direct competition with every local news site for the same pool of subscribers.  The Times already has more than 8 million paid subscribers. The Times even just bought the popular game Wordle for a price in the low seven figures. So why are we helping them?”

“The Washington area used to have a thriving chain of community weeklies. The Gazette was founded in 1959 and grew to a 550,000 circulation in suburban Maryland. They were closed down by their owners, The Washington Post, in 2015. In 2021, the Post achieved record breaking digital advertising. It’s also owned by Big Tech billionaire Jeff Bezos. He purchased the company in 2013, two years before it killed the chain of weeklies. So why are we helping them?”

Gainor also pointed out that government assistance for the news media creates a dangerously close relationship between politicians and the press, one that could make political news coverage less independent.