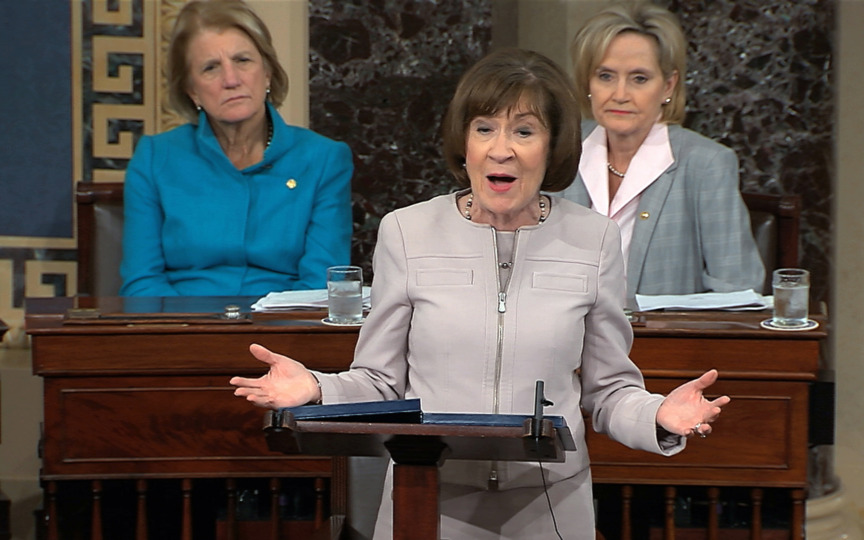 The left-wing media melted down as Sen. Susan Collins (R-ME) announced on Friday afternoon that she will vote to confirm Supreme Court nominee Brett Kavanaugh.

The media accused of her “gaslighting,” compared her to white moderate lawmakers who “legitimized Jim Crow,” and hyped up efforts to raise millions to oust her in 2020.

“Wait until they start getting cases from hotel owners who say I don’t want to use my creativity for gay customers, and restaurant owners who don’t want to serve gay customers,” Toobin warned. “I mean this is a dramatic change coming, and the conservatives are in charge. There is a reason why the evangelicals and the base of the Republican Party have stood with Donald Trump all this time. It’s not because they admire Donald Trump’s personal life, but because he has delivered on what is most important to them.”

A “moderate” Republican senator is arguing Ford misremembers the person who tried to sexually assault her.

Susan Collins passive aggressively attacking the credibility of a victim while declaring herself a champion of women’s rights in a speech that has gone on forever is … cringe worthy.

I do not think @SenatorCollins understands what she is about to unleash.

Wow, i really cannot believe that Susan Collins is citing Kavanaugh’s overlap with Merrick Garland as evidence of his moderation. Where was she when Senate GOP refused to move on Garland’s nomination?

At this point I think Mitch McConnell may be holding one of Susan Collins’ loved ones as a hostage. Collins’ speech like a video a hostage makes. The only thing missing is Collins holding up a newspaper as proof of the date

susan collins calling kavanaugh a “centrist” is so delusional

Collins goes on and on bemoaning the Sipreme Court nomination “process.” Well, there’s only two responses to that: Merrick Garland…and Merrick Garland. This is more gaslighting.

Susan Collins thinks b/c Ford can’t remember who drove her home has something to do with anything. Has she spoken to a single trauma expert? This is shameful.

The Ed Whelan theory (or some version of it) has basically become the default consensus of the GOP https://t.co/gMVHz0v3AI

“My name is not Susan, so watch what you say,” Susan Collins sitting down at dinner in public tonight

Susan Collins (Rape Apologist-ME) took the WSJ’s Kavanaugh fauxpology hook, line, and sinker; and Murdoch’s paper rewards her with this dark, juvenile headline. It’s as if Judge, Kavanaugh, PJ, and Squi respectfully wrote it to make her feel like one of the boys. pic.twitter.com/2R0T3CovhL

Have had some people come at me in recent years to dispute that “rape culture” is a thing. You can call it “non-consent culture” or we can come up with another phrase. But it’s real & it’s everywhere. And this is how it works, right here. This whole Collins shitshow. https://t.co/niCvnc59Z7

Maybe “I believe that *something* happened to Dr Ford” is meant to sound empathetic, but it ends up being an easy way to imply something about her without coming out and saying it.

We are a country where two presidents who both lost the popular vote have now placed four justices on the Supreme Court. Democracy in action.

You’ve got to hand it to them: Appointing a multiply accused sexual assault perpetrator to take away women’s bodily autonomy on the national scale is extremely ideologically consistent.