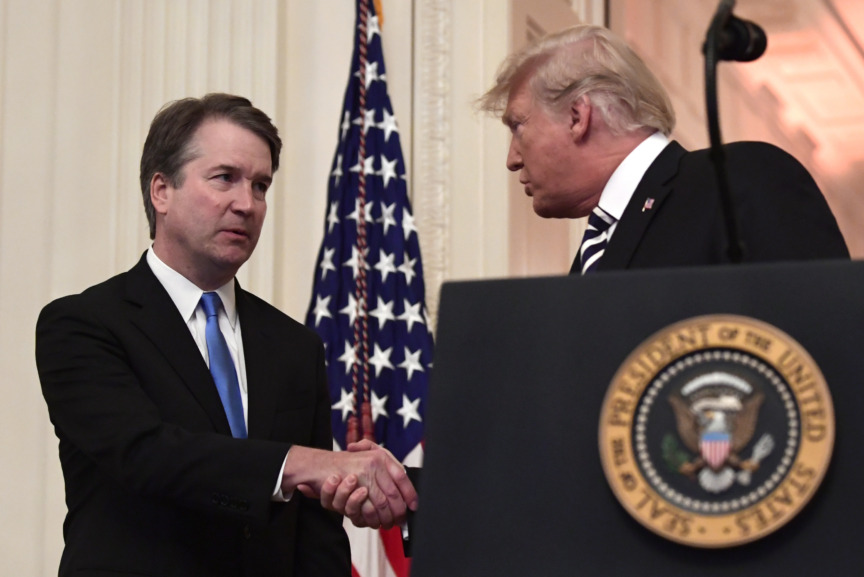 In addition to criticizing Trump for spiking the football and Republicans for caring only about power like CNN’s Don Lemon and MSNBC’s Chris Matthews respectively did, other media figures blasted the “troubling,” “partisan,” and “bizarre” event that celebrated a “belligerent misogynist.”

Trump declared that Kavanaugh was proven “innocent” of the false accusations made against him by various women during the confirmation process and apologized “on behalf of the nation” to Kavanaugh and his family for the “terrible pain and suffering” they were “forced to endure.”

“Those who step forward to serve our country deserve a fair and dignified evaluation, not a campaign of political and personal destruction based on lies and deception,” Trump said before introducing Kavanaugh. “On behalf of the nation, I’d like to apologize to Brett and the entire Kavanaugh family for the terrible pain and suffering you’ve been forced to endure.”

WTF is a SCOTUS judge doing at a WH campaign event???? He doesn’t have to do this. The president doesn’t get to “swear in” justices. This is bizarre.

Poor RBG having deal with this belligerent misogynist. https://t.co/BQNkZV62pU

“I Am an Independent, Impartial Judge” https://t.co/Bw9c4ZMdmx

Christine Blasey Ford can’t live in her own home. Go away.

.@realDonaldTrump trolling the @TheDemocrats with “victory lap” for #BrettKavanaugh in the East Room. If he could do this every night until Election Day he would.

This is waay waay worse than I imagined and I thought it would be bad.

Trump, incredibly, starts Kavanaugh’s swearing in by apologizing to him. America’s women don’t count. And Trump’s claim that Kavanaugh was “proven innocent” by a process that didn’t involve a trial let alone a full investigation, is at odds with every precept of American justice.

The USA is currently experiencing the greatest political con in its history: POTUS Donald J. Trump. The man has lied, cheated and bamboozled his way to the top. He’s been aided and abetted by credulous journalism and stupid GOP voters. Frankly, our democracy may not survive him!

What Trump is doing right now is profoundly problematic…

How is this a good set up for #kavanaugh? @realDonaldTrump turning this into a political event. What are the other justices in the front row thinking?

Kavanaugh was not, of course, “proven innocent,” as it was not a trial.

“first of all I wanna thank my connect/⁰the most important person, with all due respect”

The newest Supreme Court Justice says the court isn’t a partisan/political institution, says he has no bitterness from the confirmation process and will be impartial. 11 days earlier, during his Senate testimony, he said, “What goes around comes around” https://t.co/dk5FIsbXFq

Let’s compare this to other scotus acceptance speeches. Oh wait.

At the White House swearing-in, Trump obscenely made the occasion a purely partisan one with his ludicrous claim that Justice Kavanaugh had been “proven innocent” and his misogynistic apology for the Senate’s even having listened to Dr. Blasey Ford.

“I take this office with gratitude and no bitterness,” says Kavanaugh. “Although the confirmation process tested me, it did not change me.”
Well that’s a shame.

Kavanaugh says after previously railing about “the left” and “revenge on behalf of the Clintons” https://t.co/ZWabUT1qDy https://t.co/909tlY6H5J

As Kavanaugh re-takes oath at White House this evening, worth noting that Sotomayor and Kagan didn’t take oaths at White House. Obama wanted it that way as a symbol of their independence, administration officials said at the time. #SCOTUS