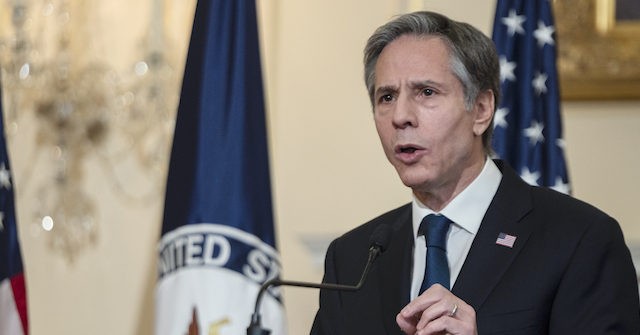 According to Taiwan News on Friday, while addressing a House Foreign Affairs Committee hearing on Wednesday, Secretary of State Anthony Blinken described Taiwan as a “country that can contribute to the world, not just its own people.”

The official House transcript of his remarks quoted Blinken somewhat differently, diminishing what the Taiwanese paper hoped could be a landmark in relations between the United States and China.

Diplomats are generally cautious about referring to Taiwan as an independent “country,” since it enrages communist China, which is perpetually threatening to attack Taiwan if it attempts to universalize recognition of its independence.

Blinken’s remarks were noted and summarized by Taiwan News on Friday:

At the tail end of a House Foreign Affairs Committee hearing on the Biden administration’s foreign policy agenda, Representative Young Kim (R-CA) noted that Taiwan has served for decades as an “invaluable security and global health partner to the United States.” She pointed out that given Taiwan’s contributions to the international community and its “strong democratic system,” it has earned “a seat at the table like the W.H.O. [World Health Organization] to share its expertise.”

Kim then called on the Biden administration to include Taiwan in the upcoming Democracy Summit and to commence talks with it on a free trade agreement. Blinken responded that he is “absolutely committed” to her suggestions and that he shares her view that “Taiwan is a strong democracy” and “a very strong technological power.”

He went on to say that Taiwan is “a country that can contribute to the world, not just its own people. COVID [Chinese coronavirus] is a very good example of that.” Young agreed with the diplomat’s remarks.

Taiwan News hoped Blinken’s use of “country” was the beginning of “a new stage in Taiwan-U.S. relations,” or at least an indication the Biden administration would follow the course charted by its predecessor, rather than a mere “slip of the tongue.”

However, the video and transcript of the House Foreign Affairs Committee suggest what Blinken actually told Kim was, “I share your view that Taiwan is a strong democracy, a very strong technological power in a country [emphasis added] that can contribute to the world, not just its own people.”

This would change Blinken’s remarks into combined praise for Communist China, and Taiwan as a part of it, not recognition of Taiwan as an independent entity – assuming the country he meant Taiwan was in was China, and not an independent Taiwan. His exact words are a little hard to make out in the crosstalk, but Taiwan News thought he was saying Taiwan is “a very strong technological power and a country that can contribute to the world..”

As of Friday afternoon, no one except Taiwan News was paying much attention to Blinken’s comments. Chinese Foreign Ministry spokesman Zhao Lijian, who would normally be quick to rail at the United States for bringing the world to the brink of war by giving verbal support to Taiwanese “separatists,” did not mention the incident in his Friday morning press conference.

U.S. State Department Ned Price briefly mentioned Taiwan as one of the issues the Biden administration plans to discuss with Chinese officials in his press conference on Thursday afternoon, but he did not indicate any significant change in U.S. policy or follow Blinken’s lead in referring to Taiwan as a “country.”

The controversy between the U.S. and China is heavily focused on China’s eradication of political autonomy in Hong Kong at the moment. Taiwan’s opposition, which is generally more favorable to Beijing than the governing party of President Tsai Ing-wen, was glum about developments in Hong Kong on Friday, suggesting the oppression of Hong Kong has destroyed any lingering faith in a “one country, two systems” autonomy deal between Taipei and Beijing.

Next week, Blinken and National Security Advisor Jake Sullivan are scheduled to visit Alaska to meet their Chinese counterparts, and according to Breitbart News, they will “raise objections to Beijing’s efforts to undermine America, and explore potential avenues of cooperation.”