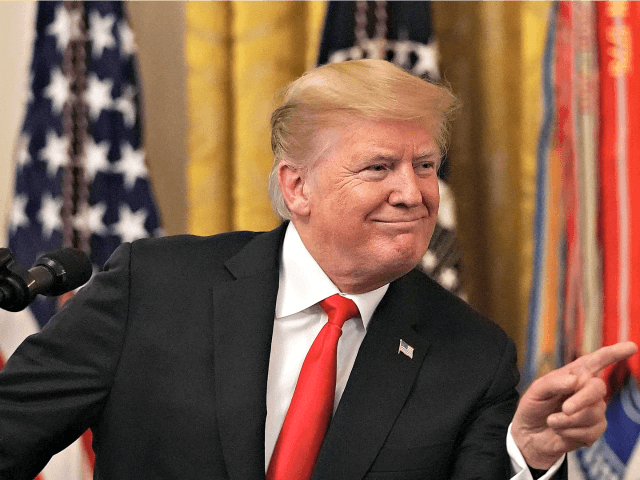 Polling from Politico/Morning Consult shows support for President Trump and the border wall both moved in his direction since the beginning of the month. This is a huge failure for an establishment media that has been campaigning against Trump and his wall non-stop for months.

On January 30, this very same Politico/Morning Consult poll showed that 47 percent oppose building a wall along our southern border, while 45 percent want to see a wall constructed. In a poll released Wednesday, those opposed have remained steady at 47 percent, but now the same number, 47 percent, want to see the wall built.

Trump’s job approval rating also improved. Last week, only 41 percent of those polled approved of the job the president is doing, with 56 percent saying they disapprove. That number has now jumped to 45 percent approve, with a narrow majority of 51 percent disapproving.

Overall, that is a nine point shift in the president’s favor, quite an accomplishment when you take a close look at a 24/7 corporate media jihad that spends billions on every month to undermine Trump’s public support and defeat his policy proposals.

This trend is consistent in other polling.

According to the latest from Gallup, Trump’s job approval rating jumped seven points, from 37 percent last month to 44 percent.

Gallup also shows economic optimism at a record high with 69 percent saying “it is now a good time to find a quality job.” A clear majority of 57 percent also rate the economy as “excellent or good,” with 52 percent approving of Trump’s economic stewardship.

What’s more, current polling now proves that the media’s all-out assault on Trump has backfired on the media. Public trust in the media, in every important area, has plummeted, while Trump’s fortunes continue to improve.

For the past month, the media have hammered Trump over the partial government shutdown, run a series of desperate and embarrassing fact checks against his well-received State of the Union speech, and railed against the wall, and here we now are, on the other side of the shutdown, and public support has increased for both Trump and his wall.

As far as Trump goes, his policies have produced real results. The economy is on fire, wages are increasing for the first time in forever, and manufacturing jobs are making a comeback. In foreign policy, Trump has strengthened America’s position in the world, tamed North Korea, kept us out of stupid wars, and kept his promises when it comes to removing our troops from endless wars.

The media, however, only have one result to show for their three-year campaign to destroy Trump, and that’s failure. Not only is the president defying media predictions by doing a good job, the media’s big gamble, its two-year all-in Russia Collusion Hoax, is coming apart at the seams.