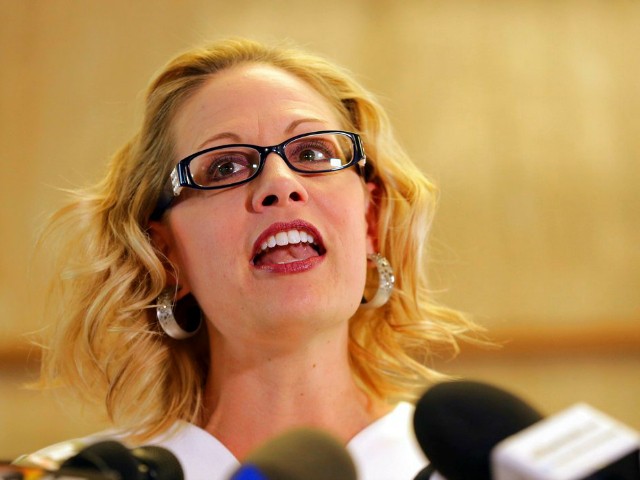 Arizona Rep. Martha McSally (R-AZ), a retired Air Force colonel running for the Senate, responded to Democrat opponent Rep. Kyrsten Sinema’s recently unearthed remarks that it was OK for Americans to go and fight for the Taliban against U.S. troops.

“I was actually deployed on 9/11 to Saudi Arabia. We ramped up to go fight the Taliban, who was harboring Osama bin Laden and the terrorists who killed Americans in the Twin Towers and the Pentagon,” McSally said on Fox and Friends on Saturday.

“I was over there flying and commanding an A-10 squadron just a year later and we had the Taliban trying to take out our troops, and she’s says it’s OK for Americans to go and fight against us? This is unbelievable and disqualifying,” McSally said.

Sinema said in 2003 that she did not care if Americans fought with the Taliban against U.S. troops.

In a February, 2003 radio show interview, then-Green Party activist host Earnest Hancock told Sinema, “As an individual, if I want to go fight in the Taliban army, I go over there, and I’m fighting for the Taliban, I’m saying that’s a personal decision.”

Sinema responded, “Fine. I don’t care if you go and do that, go ahead.”

Two months after that interview, Sinema told the Arizona Republic that “we should feel compassion” for enemy combatants killed in Iraq, according to the Free Beacon.

McSally also pointed out the inherent contradiction in Sinema claiming to be a feminist but supporting Americans fighting for the Taliban — who oppress women and stone them to death.

“The fact that she wants to be a United States senator — I hope Arizonans will wake up. Do not buy the new Hollywood Sinema act of reinventing herself because of her ambition. And I would be honored to represent Arizonans in the Senate as someone who’s served 26 years in the military.”

McSally and Sinema are running a tight race in Arizona. A recent ABC15 and OH Predictive Insights poll showed that McSally has pulled ahead of Sinema by 6 points.