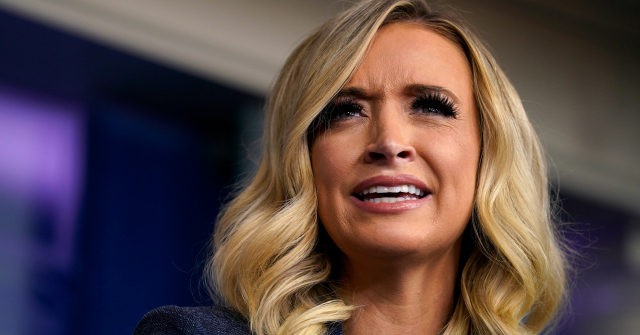 McEnany replied, “He learned of his positive test last night, within an hour we put out that information to the American people. I spoke to him, and he was in very good spirits and is having mild symptoms right now.”

Faulkner asked, “The New York Times is coming under fire for suggesting President Trump may not remain on the ballot. President Trump revealed early Friday morning he and the first lady tested positive for the coronavirus. Throwing the nation’s leadership into uncertainty if he becomes sick. It could race questions whether he should remain on the ballot. What is the response from the White House?”

McEnany said, “What a ridiculous assertion by The New York Times. That may be the wish of The New York Times, but this president is the president of the United States. He is on the ballot, and he is hard at work. You look at the jobs report today, those remarkable numbers, below 8% unemployment. That’s a testament to what this president has done. He is continuing to work. He will all the way through November.”

Faulkner said, “Will we see a national address from the president?”

McEnany said, “Look, I won’t confirm exactly what you will see from him. But it is safe to say that you will be seeing and hearing from the president as he moves forward with a working schedule. We are exploring a number of different ways to do. He wants to talk to the American people. I can tell you this about President Trump. This man loves the American people, loves speaking to them directly. Nothing will stop him from doing just that.”