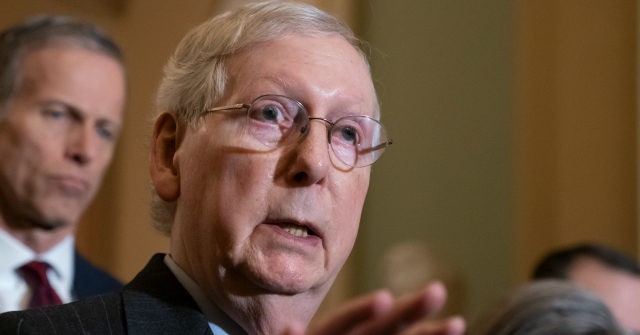 Senate Minority Leader Mitch McConnell (R-KY) on Wednesday took aim at Senate Majority Leader Chuck Schumer (D-NY) over efforts to end the Senate filibuster after being critical of ending it in the past.

McConnell attributed the flip-flop from Schumer to the lawmaker from New York “yielding to the pressure of the hard left.” He added that Democrats want to “advance their steamroller agenda” through, noting the far-left agenda is unpopular among the American people.

“Schumer had it right two years ago,” McConnell emphasized on Fox News Channel’s “The Faulkner Focus.” “That’s what he thought then. But he is yielding to the pressure of the hard left to turn the Senate into a speedway as opposed to a place where things are paused and thought over. The Senate was created on purpose, Harris, not to function like the House, to slow things down, to kill bad ideas, to force bipartisanship. All the things that the Democrats believed in as long as there was a Republican in the White House are conveniently thrown aside as soon as they think there is a chance that they could advance their steamroller agenda, which the American people, by the way, certainly did not give them a mandate to pursue in last November’s election.”