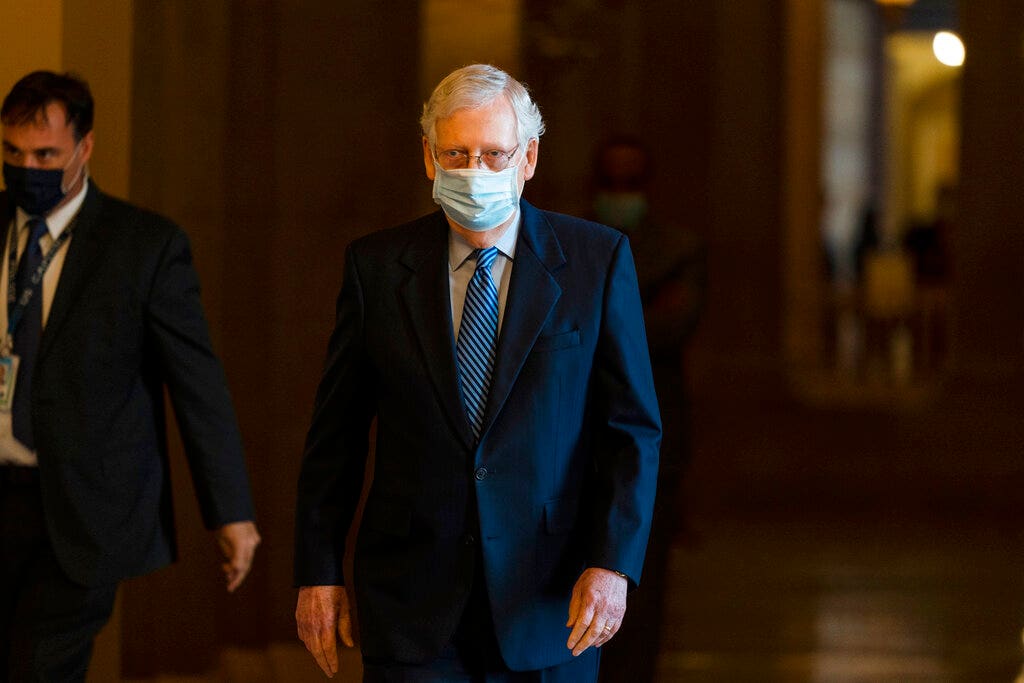 Sen. Majority Leader Mitch McConnell on Saturday detailed a $500 billion “skinny” coronavirus relief bill that he said the Senate will vote on this Wednesday.

The bill, far more targeted than the White House’s $1.8 trillion relief measure, will expand federal unemployment benefits, replenish the Paycheck Protection Program, provide over $100 billion to schools and fund vaccine production and distribution as well as testing and tracing.

McConnell said that barring any obstruction from Democrats, the Senate would vote on the measure before turning to vote on Judge Amy Coney Barrett’s confirmation to the Supreme Court.

He’d need 60 votes to move the bill through the Senate. Democrats previously blocked a similar bill.

The White House offered $1.8 trillion for coronavirus relief, the closest an offer has been to the House’s trimmed $2.2 trillion bill, but House Speaker Nancy Pelosi rejected it. “Working families have spent months waiting for Speaker Pelosi’s Marie Antoinette act to stop,” the Kentucky Republican said in a statement.

President Trump called for an even higher number, but McConnell brushed off the president’s demands to try to instead push for a smaller, more immediate bill.

Negotiations remain ongoing between the White House and Pelosi, who is set to again speak to Treasury Secretary Steve Mnuchin Saturday night.

“Republicans have tried numerous times to secure bipartisan agreement,” McConnell continued. “But Speaker Pelosi keeps saying she feels ‘nothing’ is better than ‘something’ and clinging to far-left demands that are designed to kill any hope of a deal.”

McConnell said the bill was not designed to be a cure-all for pandemic relief. “It would deliver huge amounts of additional help to workers and families right now while Washington keeps arguing over the rest.”

Senate Republicans unveiled a $1.1 trillion relief package in July, but McConnell warned that up to 20 GOP senators could oppose it if it came for a vote.

A $500B bill in September was supported by 52 of 53 Republicans before it was blocked by Democrats.

Meanwhile, Trump and Pelosi have not personally spoken in over a year. When asked if he would call up Pelosi to work through negotiations on relief, Trump said he wouldn’t because the Speaker has “a lot of mental problems.

Pelosi also defended her decision to avoid the president, saying of speaking with him: “I don’t find it a good use of time.”

“Well, I’ve spoken to his representatives and he says that they speak for him. And I take that to be true about the secretary of the Treasury and we have worked together,” Pelosi said, noting previous coronavirus deals.

“Quite frankly, my experience with the president has been that it hasn’t been on the level. You know, he’ll say something and then it doesn’t really happen. So in the interest of time, we’ll work with who he sends over,” Pelosi said.