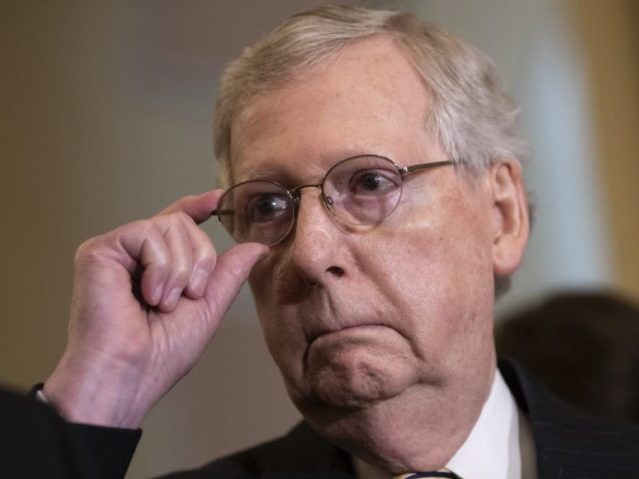 During a speech on the Senate floor on Monday, Senate Majority Leader Mitch McConnell (R-KY) criticized Democrats for keeping the allegations against Supreme Court nominee Judge Brett Kavanaugh secret until “the 11th hour, with committee votes on schedule, after Democrats have spent weeks and weeks searching for any possible reason that the nomination should be delayed,” and praised Senate Judiciary Committee Chairman Chuck Grassley (R-IA) for planning bipartisan interviews of Kavanaugh and his accuser, Christine Blasey Ford.

McConnell said the accusation “of 36-year-old misconduct, dating back to high school, has been brought forward, at the last minute, in an irregular manner. … It is an accusation which the ranking member of the committee of jurisdiction has known about for at least six weeks, known about for six weeks, yet chose to keep secret until the 11th hour.”

After listing instances where Democrats didn’t raise the accusation, McConnell stated, “But now, now, at the 11th hour, with committee votes on schedule, after Democrats have spent weeks and weeks searching for any possible reason that the nomination should be delayed, now, now, they choose to introduce this allegation.”

McConnell concluded, “I’m glad that Chairman Grassley is following standard practice and regular order, and he stated he plans to pursue this matter by the book, with bipartisan interviews of both Judge Kavanaugh and Dr. Ford. I have great confidence in Chairman Grassley and his ability to proceed through this process.”