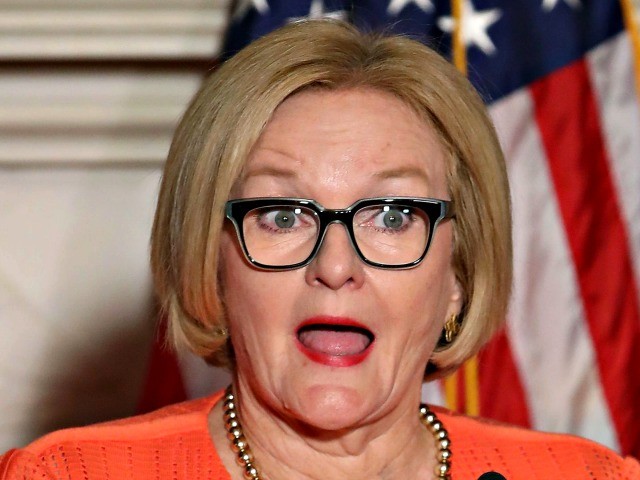 Video surfaced Tuesday of Democrat Sen. Claire McCaskill saying “every day it’s something else,” describing public pleas of “save us,” and directing people to donate to her campaign like a swear jar.

McCaskill appears to be speaking to supporters in a room plastered with her campaign signs. She describes going to “Schnucks on Sunday” or “the mall with [her] grandchildren” in the past when people would just say hi, tell her she was doing a great job. “Now people come up to me and say ‘save us’,” she told the group, acting out the drama of the remarks.

“There’s this unbelievable urgency,” she declared. “And I realize that this is what people are talking about constantly.”

“I mean every day it’s something else, right?” she asks the group.

McCaskill then launches into a story about when she was an assistant prosecutor and engaged in prolific swearing in an effort to “fit in.” She describes eventually being approached by one of the older lawyers who discouraged her “tacky” cussing. After that, she had a swear jar on her desk that she put a dollar in every time she cussed. “So, from here on out,” she told the group that any time between then and November, anyone complains about President Donald Trump, they are to put five dollars in the “Trump swear jar” that is located at clairemccaskill.com.

Republican U.S. Senate candidate Josh Hawley, who is challenging McCaskill, tweeted a link to the YouTube video showing McCaskill making these comments. Video posted by the Washington Free Beacon also appears to show the event. The outfit she is wearing in the videos appears to match what she was wearing that day while touring a shuttered nail factory in Poplar Bluff, Missouri.

On TV @clairecmc says she’s independent.  But what does she say behind closed doors? That the country needs “saving” from @realDonaldTrump and she’s the one to do it. She’s not independent. She’s a hardcore partisan #MOSen https://t.co/5i9dTOi9gJ

McCaskill’s Senate office declined to answer questions about the event, as it was related to the campaign. McCaskill’s campaign did not immediately respond to a request for comment.