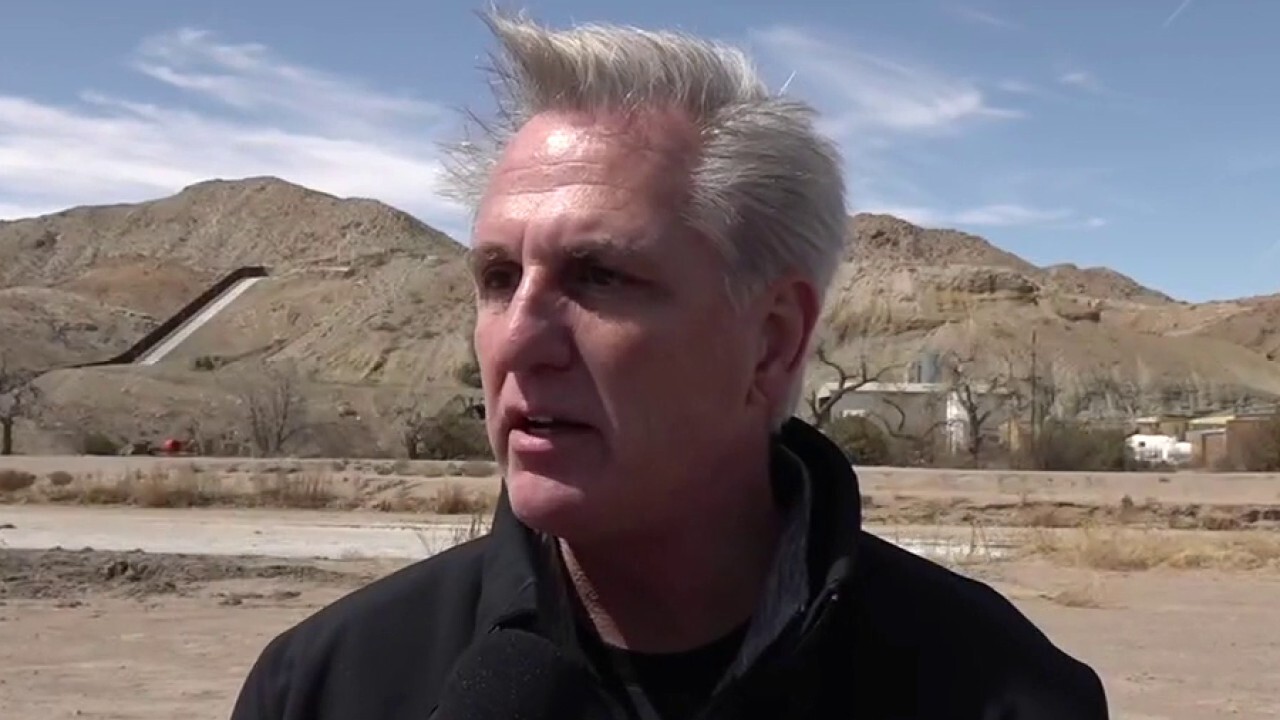 House Minority Leader Kevin McCarthy pressed President Biden — again — for a meeting to discuss the situation at the U.S. southern border, maintaining that “securing our border should not be a partisan issue.”

McCarthy, R-Calif., wrote a similar letter to Biden earlier this month, requesting a meeting, but said Thursday he has yet to hear back from “you or anyone in your Administration about scheduling a meeting,” as the situation at the border has “only continued to deteriorate.”

McCarthy’s letter comes after he led a congressional delegation to El Paso, Texas, this week, which he said “confirmed that the situation at our southern border is even worse than we anticipated.”

“There are now 13,000 migrant children being held in U.S. custody, one of the facilities is at 729 percent over capacity, and the inflow of migrants shows no signs of slowing down,” McCarthy wrote to the president Thursday. “Your own Homeland Security Secretary Alejandro N. Mayorkas admitted two days ago that the United States is ’on pace to encounter more individuals on the southwest border than we have in the last 20 years.’”

“Securing our border should not be a partisan issue. The most basic function of government is to keep our citizens safe,” McCarthy wrote.

McCarthy warned that “without a coordinated approach to stop the massive flow of illegal immigrants attempting to cross our border in the midst of a pandemic, and some who have even been on the FBI’s Terror Watch List, the federal government is failing to carry out one of its most essential and critical responsibilities.”

McCarthy wrote that “The El Paso Processing Center, a 98,000 square foot facility equipped to handle more than a 1,000 migrants at a time, hit a record the morning we were there – it is now beyond capacity.”

McCarthy also warned that “the uncontrolled flow of migrants has also caused unique health challenges during a pandemic.”

“This not only risks the health of the Border Patrol Agents working at the facilities, but it will also make it harder for our own border communities to control the spread of this virus and will delay their return to normalcy,” he wrote.

McCarthy added: “Even more alarming, while in El Paso, we were briefed that Border Patrol agents have caught people attempting to enter our country who were suspected terrorists.”

McCarthy laid out a number of proposals to “stop the border crisis,” including restarting construction of the border wall in priority areas and dispersing the proper security technology needed to complement the structure.

The policy, formally known as the Migrant Protection Protocols, involves migrants who arrive at the southern border and claim asylum. They are returned to Mexico to await their hearings instead of being allowed into the United States.

And maintain Title 42 authorities to “quickly expel migrants shortly after they illegally cross the border during a pandemic, something Border Patrol agents on the ground specifically insist is a valuable tool.”

“Do not make the dangerous journey to the United States to cross the border illegally,” McCarthy wrote. “Doing otherwise is in violation of our laws.”

McCarthy also proposed creating a “robust” COVID-testing program for migrants who are detained to prevent outbreaks in communities in the United States.

“Once again, Mr. President, I am requesting a meeting to discuss the crisis and replay what I personally saw on my trip to the border,” McCarthy wrote. “If you are serious about securing our border and solving this crisis, then let’s put our political differences aside fore the betterment of our country.”

He added: “We can no longer continue to implement a strategy of inaction and denial. It is well past time we work together to stop the ongoing humanitarian and national security crisis happening at our Southern Border.”

McCarthy and 12 other House Republicans visited the border Monday as they continued to criticize the White House over the surge in migrant crossings since Biden took office. The surge includes a large number of unaccompanied children, some of whom McCarthy met during his trip.

Biden said Tuesday he does not have any plans to travel to the southern border “at the moment,” amid a migrant surge in migrants and overwhelmed facilities.

Republicans have laid blame on Biden for the surge after he rolled back a number of Trump-era immigration restrictions he deemed inhumane, including ending the “Remain-in-Mexico” policy and reinstating “catch-and-release.” Biden’s immigration agenda includes a pathway to citizenship for 11 million undocumented immigrants.

Department of Homeland Security Secretary Mayorkas on Tuesday described the border situation as “difficult,” but just as the White House has, refrained from calling it a crisis.

Customs and Border Protection (CBP) announced that it had encountered more than 100,000 migrants at the border in February, while numbers of child migrants in custody have also increased dramatically. The Biden administration has been moving to increase capacity of facilities to house migrants, and building a number of extra facilities — including looking at NASA sites and military bases.

On Saturday, Mayorkas announced he had directed the Federal Emergency Management Agency (FEMA) to support a “government-wide effort” to house child migrants.

On Tuesday, Mayorkas said the U.S. has not seen these kinds of numbers in decades.

“We are on pace to encounter more individuals on the southwest border than we have in the last 20 years,” he said, although he later added that the situation is “not new” and noted the U.S. has faced border spikes before.