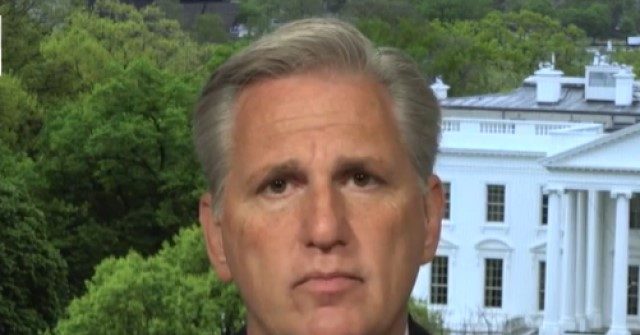 Wednesday on Fox News Channel’s “Fox & Friends,” House Minority Leader Kevin McCarthy (R-CA) dismissed the claim that the so-called defund the police efforts were a step too far for Democrats.

McCarthy explained that in the past, Democrats have said other things were too much, including impeachment and Medicare for All. However, they later pursued them as policy.

“Those are the exact same words I heard Nancy Pelosi say about impeachment and then she moved forward — or Medicare for All,” he said. “Those are things that they start to say before they surrender to the socialists. This movement of defunding the police through the Democratic Party is stronger than impeachment ever was nor Medicare for All because they’re already taking actions on it. Cities are already doing that. And that’s the last thing you want to happen, and it only perpetuates the problem more. We should be providing more money to training. If you look at the recent study by the chiefs of police, 80 percent of them said there’s a greater need for training. We want the very best officers out there. So we should provide greater training.”

“We should provide better transparency — the data,” McCarthy continued. “We’ve got an FBI where individuals can put in a datasheet, but only 45% of the departments participate in that. And then you want accountability. Ninety-nine percent of all officers believe and put their — put their life on the line to protect and serve us. But what about those one percent of bad apples? We’ve got to be able to remove those individuals, and it’s normally not the first time when we see it. If we have better performance, better transparency, and better accountability, we will have a much better solution to this problem.”