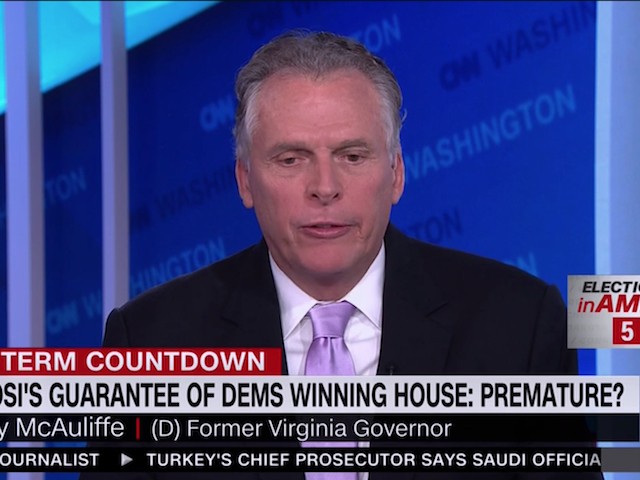 Thursday on CNN’s “Wolf,” former Gov. Terry McAuliffe (D-VA) said President Donald Trump has so marginalized himself that “nobody pays attention to him.”

McAuliffe said, “I think we ought to be tough on the issues. Why is Trump doing what he’s doing? The fear and division and attacking folks? He can’t run on issues.”

He continued, “He is back on fear and division and attacking people, and the way he is attacking our candidates and the way he goes after folks like Andrew Gillum is disgraceful. He is scared. He knows he is going to lose the House. And he knows Democrats are going to get subpoena power and they are not putting up with his stuff anymore. I think he is really scared. He has got himself in a corner. We ought to continue to be out on health care, and education and those are the issues people care about.”

He added, “You don’t pay attention to Donald Trump. He so marginalized himself in this country. Nobody pays attention to him. We will have a win because people have had it with his policies. Sending our military to the border, our border and customs patrol are doing a great job down there. This is all politicized—and our military—I think it is a disgrace that he is talking about sending these troops down there right before the midterms.”

McAuliffe summed up by saying, “Division, hate, fear. That is Donald Trump.”