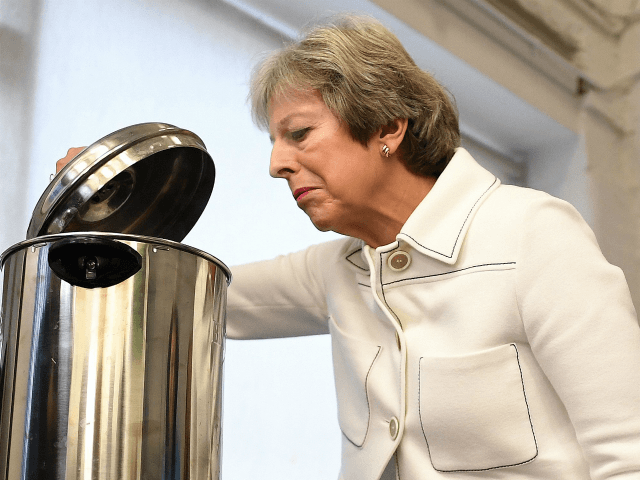 The Prime Minister has pleaded with ministers and MPs to support her unpopular Brexit plan ahead of a crunch European Union (EU) meeting on Wednesday.

Theresa May’s plea comes as the pro-Brexit, Northern Irish Democratic Union Party (DUP) ramps up its pressure on her and Tories call for a rebellion against her Chequers plan that will leave the UK tied to the EU.

Members of the European Research Group, led by Jacob Rees-Mogg, are now privately telling pro-Brexit Cabinet ministers they will trigger a vote of no confidence this week unless they can make her abandon Chequers, The Telegraph claims.

An ERG source said: “If the Cabinet does not chuck Chequers I think we will have a vote of no confidence… by this week, next week. We are completely on the brink now.

“We are saying to every member of the Cabinet that we speak to – if you don’t sort this out, if you do not get Chequers chucked we are going to do it.

“This fight is going to happen. If the Cabinet does not do it – the backbenchers are going to do it.”

EU Talks Break Down, Ministers Told to Have ‘No Deal’ Brexit Preparations Ready in Weeks https://t.co/YXbNzYQZHt

Mrs May had told a three-hour Cabinet meeting on Tuesday morning she would not separate Northern Ireland from the rest of the UK with customs checks, as reports had suggested, prompting the DUP to threaten to vote down the forthcoming budget.

However, May now plans to keep the entire UK tied to the bloc’s Customs Union after Brexit and the two-year “implementation period”, repeatedly refusing to name a date when the UK will leave and take back control of trade policy and goods regulations.

Speaking in the Commons Tuesday afternoon, she said: “This is the time for cool, calm heads to prevail and it’s the time for a clear-eyed focus on the few remaining but critical issues that are still to be agreed.”

May also told MPs: “I continue to believe that a negotiated deal is the best outcome for the UK and for the European Union.

“I continue to believe that such a deal is achievable. And that is the spirit in which I will continue to work with our European partners.”

Over the weekend the former Brexit minister David Davis called for rebellion, demanding ministers “exert their collective authority” at this “moment of truth”.

Mrs May’s plan is “unwise” and “completely unacceptable,” he wrote in The Sunday Times, adding:

“This is one of the most fundamental decisions that government has taken in modern times. It is time for the Cabinet to exert their collective authority. This week the authority of our constitution is on the line.”

A group of 63 Brexiteers also penned an open letter to the government in a show of strength, demanding data that could support the Brexit cause be published.