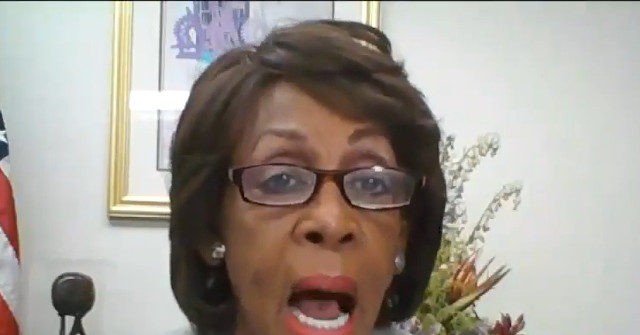 Rep. Maxine Waters (D-CA) on Friday, an outspoken progressive politician who has publicly demanded President Trump’s removal from office, wondered if anyone in Trump’s cabinet would invoke the 25th amendment “before this would-be dictator takes us all down.”

Waters, as demonstrators across the country began to take to the streets for Friday night protests, proclaimed that Trump is “amassing the power of a dictator” and asked if any “brave” figure within his cabinet “would move to initiate the 25th amendment to remove him from office.”

“Now is the time to save our country before this would-be dictator takes us all down!” she warned:

Is there one brave member of Trump’s cabinet who would move to initiate the 25th amendment to remove him from office? Now is the time to save our country before this would-be dictator takes us all down!

Trump brought in the FBI, Homeland Security, Natl Guard, active duty military troops, & helicopters to use against our citizens & our young people protesting against the killing of unarmed people of color. He is amassing the power of a dictator. Stop him! Join the resistance!

As the world focuses on protests & unites in the denouncement of the killings of unarmed black people, #BreonnaTaylor is not forgotten. Had she lived, she would’ve been 27 yrs old today. Breonna, your death was not in vain. We are fighting for you.

President Trump relieved D.C. Mayor Muriel Bowser of command of law enforcement on Monday following Sunday night’s out-of-control protests as lawlessness permeated the streets. He announced the mobilization of available federal resources — “civilian and military — to stop the rioting and looting, to end the destruction and arson, and to protect the rights of law-abiding Americans, including your Second Amendment rights.”

The following nights in D.C. were demonstratively calmer from the mayhem that broke loose Sunday, but Bowser on Thursday asked Trump to remove all “extraordinary federal law enforcement and military presence” from the city, contending that the “municipality of forces can breed dangerous confusion.”

The request comes as the city gears up for another weekend of protests:

I request that @realDonaldTrump withdraw all extraordinary federal law enforcement and military presence from our city. pic.twitter.com/AvaJfQ0mxP

Waters — a longtime Trump critic who took part in the failed Democrat effort to remove the president from office — has praised the protesters in recent days, assessing that they have been able to accomplish what “ministers begging and praying have not been able to achieve.”

The California lawmaker this week explained why she rejects using the term “rioting” in describing violent protests, saying she considers it “negative language used far too often in a description of black people by folks who fundamentally don’t see black people the same way they see whites and others.”

“A lot of negative language gets used against black people, describing what whites often believe is true about us: that language includes ‘lazy,’ ‘criminal,’ and ‘rioting,’” Waters told the Cut.