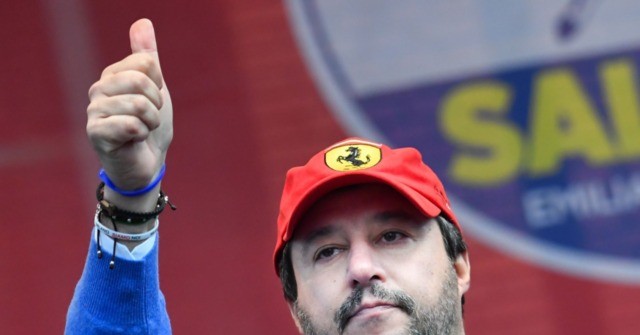 The head of Italy’s leading political party said in an interview Sunday the recent surge in antisemitism in Europe is primarily the consequence of the mass immigration of Muslims on the continent.

“I think that it has to do with the strengthening of Islamic extremism and fanatism in the last years,” Matteo Salvini told Israel Hayom. “Most importantly it is connected to the fact that some academics and media are mobilized against Israel and they create hate of Israel to justify antisemitism.”

Salvini said that a certain level of antisemitism has always existed on the extreme left and the extreme right, but its current growth has to be attributed to a shift in Europe’s population.

“There is, of course, antisemitism of small political minority groups – Nazis and communists,” Salvini said. “But, now the massive presence in Europe of migrants coming from Muslim countries, among whom are many fanatics who are getting the full support of certain intellectuals, is spreading antisemitism in Italy as well.”

As Breitbart News reported last July, antisemitism in Europe has grown over the last five years and is predicted to get even worse, according to a sweeping survey of 2,700 young European Jews conducted by the E.U. Agency for Fundamental Rights.

Among the Jews surveyed, who aged between 16 and 34, nearly half (44 percent) have experienced harassment due to their faith and do not wear distinctive clothing because of safety fears.

Last March, U.S. Secretary of State Mike Pompeo said he was “deeply worried about an old threat that is reemerging to Israel and Jews all around the world, the threat of antisemitism.”

“It’s a cancer metastasizing in the Middle East, in Europe, and indeed, sadly here in the United States as well. In Britain, the labor party’s tolerance of antisemitism in its ranks is a national disgrace, and France’s Jews are under attack,” he said.

In Sunday’s interview, Mr. Salvini said that the liberal media tries to blame European anti-Semitism on the rise of right-wing parties, but noted that this theory does not comport with the facts.

“There is far-right anti-Semitism, and there is a far-left anti-Semitism, which is institutionalized,” he said. “Think of Jeremy Corbin, or the left activists in Germany, who didn’t want to be like the Nazis and ended up boycotting Israeli products.”

“I am sure, however, that the high number of Muslims in Europe is the main cause for the current anti-Semitism,” he said.

The leader of the Lega party and Italy’s most trusted politician, Mr. Salvini said that his party has refused to partner with parties who accept anti-Semitism.

The Lega has “no relations whatsoever with such organizations,” Salvini said.

The former interior minister also said that many progressive European institutions are no friends to Judaism.

“Those who want to erase the State of Israel should know that they will have in us an enemy. Israel is an ally. This should be taught in schools and universities,” Salvini said.