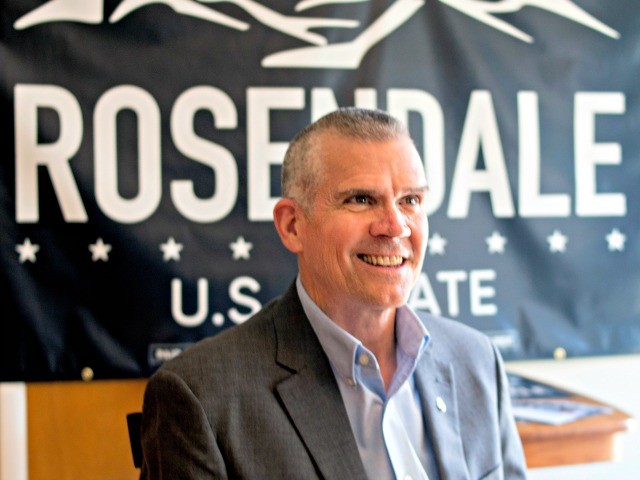 “The only thing Judge Kavanaugh is guilty of is agreeing to serve on the Supreme Court and being nominated by President Trump,” Rosendale said. “That’s it, and the people of this state are disgusted with the demonstration that they saw over the last several weeks. Jon Tester invented this smear tactic, and Dianne Feinstein perfected it.” [Emphasis added.]

Rosendale reminded Breitbart News Saturday listeners that Tester, as the ranking member of the Veterans Affairs Committee, infamously tanked the nomination of President Donald Trump’s personal physician Admiral Ronnie Jackson with unfounded lies, accusations so that he could not serve as the Secretary of the Veterans Affairs Department.

“What Tester did to Admiral Jackson should never be allowed,” Trump said. “Ronnie Jackson is a great man,” President Trump said a rally in Billings, Montana, in September.

Rosendale explained how the Montana Democrat invented the very tactics that Feinstein and other Democrats have used to attack Judge Kavanaugh.

The Montana conservative said, “The Washington Democrats’ smear tactic is just unacceptable to the people out here. Jon Tester came out and took a good man, admirable, Ronnie Jackson had been nominated for Veterans Affairs and released a bunch of information that was proven to be false.”

Sen. Tester announced last week that he would oppose Kavanaugh for the Supreme Court, citing the nominee’s alleged positions on privacy, campaign finance, and the allegations that Kavanaugh sexually assaulted Christine Blasey Ford. The Montana Democrat also said that he wished he could have met with Kavanaugh to discuss his concerns with the nominee; however, Rosendale contends that Tester had plenty of time to meet with the president’s nominee.

Rosendale said that Republicans “are extremely fired up I have had an overwhelming outpouring of support over the last couple of weeks because Jon made it clear and stated that he was not going to support Brett Kavanaugh. He told folks 90 days ago when Judge Kavanaugh was first nominated that he was going to give him the opportunity to meet with him and explain his positions on things, 30 days go by he wouldn’t take the meeting. Sixty days go by he wouldn’t take the meeting.”

“He says that the White House canceled his meeting with Judge Kavanaugh and that’s why he wasn’t able to get the meeting,” Rosendale continued. “The White House came out and said that was completely false. Labor Day Weekend, the newspapers come out and print retractions, and he said he was mistaken, it wasn’t really the White House.”

The Montana Republican said that Tester support all of Barack Obama’s nominations 100 percent of the time, including Supreme Court Justice Sonia Sotomayor who said that the right to bear arms is not a “fundamental right.”

Rosendale charged, “Well I would tell you something, the folks of Montana overwhelming understand, not just believe, that it’s clearly written in our Constitution that the right to own a gun is a fundamental right and we should not be confirming a Supreme Court Justice who doesn’t understand that.”

Boyle noted that Republicans and the American have become energized by the Supreme Court nomination process.

“The Silent Majority is not so silent anymore,” Boyle contended.

Rosendale said that there’s an incredible amount of energy in Montana right now and his campaign will host a “Support Kavanaugh” rally on Saturday.

Rosendale concluded, “We’re having a ‘Support Kavanaugh’ rally in Billings, Montana today and the energy and enthusiasm is incredible. I got folks, and many of them are political pundits that have been involved for many years saying they have not seen anything like this in ten years.”