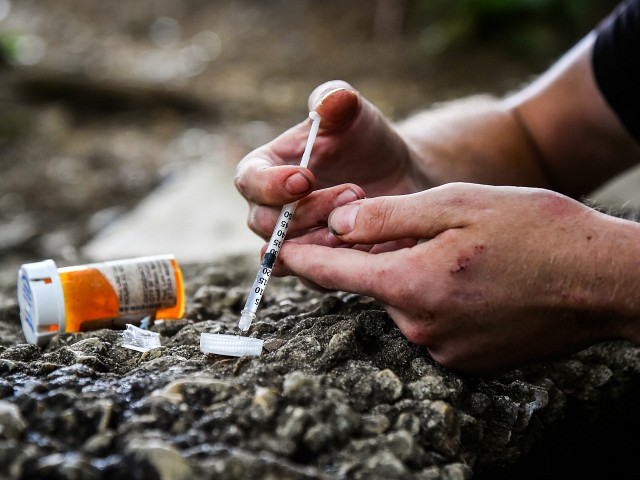 The Dark Wire’s eye-opening new documentary, Not in Vein, illustrates how Mexican drug cartels utilize the porous border with America to their advantage, making billions of dollars and killing Americans at record rates in the process. The documentary provides a powerful testimonial to securing the southern border to combat the opioid crisis.

The 44-minute documentary, Not in Vein, which begins on Arizona’s “super-highway for drug smuggling,” is narrated by investigator Sara Carter, who travels from the U.S.-Mexican border all the way to Ohio to learn about the harsh realities surrounding the opioid crisis that has been plaguing the U.S. for decades.

A 24-minute version of the documentary is available on Vimeo:

The dominant cartel, Sinaloa, is equipped with U.S.-based groups that protect drug houses and lead illegal drug distribution throughout the country. These groups are armed, and utilize the southern border as a means for trafficking enormous amounts of narcotics into America, seemingly with ease, traveling through U.S. Ports of Entry.

The Sinaloa Cartel is the major supplier of heroin and opioids in the U.S. market, according to the Drug Enforcement Administration (DEA).

Robert Arce, Breitbart Border And Cartel Chronicles Team reporter, has worked for both federal and local law enforcement, and spent three years in Mexico dealing with the international narcotics trade. “Whether it’s human smuggling, or drug trafficking, you don’t cross through those routes unless you are paying to those cartels,” said Arce, “if you’re a smuggler and you’re not paying, and you get caught, the sentence will be death. They will kill you.”

“More than 72,000 people died last year from overdoses,” Carter told Breitbart News, “and those numbers are expected to increase as narco-terrorists like the Sinaloa Cartel, and nation’s like China, continue to traffic Fentanyl and other drugs into our nation.”

With an unsecured border in the south, nowhere in the U.S. seems to be safe. The plague of narcotics and drug overdoses stemming from distribution by these foreign cartels is not isolated to border communities; it has spread, decimating communities across the nation.

In Ohio, the documentary highlights Heidi Riggs, an opioid addiction activist who lost her 20-year-old daughter to a drug overdose.

“This is domestic terrorism and we need to demand that our leaders in Washington declare the Mexican Drug Cartels enemies of the state,” Riggs told Breitbart News, “The Mexican Drug cartels have weaponized drug use and they are killing Americans. This is why we call it terrorism in the film.”

Riggs is likely correct. By declaring the Mexican drug cartels terrorist organizations, the Mexican government is faced with two options: it either cooperates with the U.S. in fighting the cartels, or the U.S. will have to do it alone. Other efforts to stop the cartels have proven futile.

Derek Maltz, a former Special Agent in Charge (SAC) of the DOJ, DEA, and Special Operations Division (SOD), also told Breitbart News that the Department of Defense must take this step in securing the US southern border.

“Law enforcement alone can’t resolve this unprecedented problem which has escalated out of control by greedy cartels,” said Maltz, “The Mexican cartels are killing at record levels, dumping humans in acid, and chopping off limbs while they push poison all over the streets of America.”

“It’s time we designate them exactly what they are, foreign terrorists. By calling them what they are, the U.S. can utilize the powerful laws and incredible resources to destroy their operations. Enough is enough and the U.S. needs to seal the border and keep the criminals out.”

Attorney General Jeff Sessions held a press conference recently, announcing a “whole of government effort” to take down the Cartel Jalisco Nueva Generacion (CJNG). “We will continue to carry out President Donald Trump’s order to dismantle transnational criminal organizations,” said Sessions, “They are in our crosshairs.”

The White House stated last year that the opioid crisis causes America to endure a death toll equivalent to the September 11th terrorist attack every three weeks, as tens of thousands of Americans die every year due to drug overdose.

It is evident that the United States needs to take a more serious, hardline approach on its southern front, for the sovereignty of the nation is at stake.

An unsecured U.S. border not only aids illegal immigration and human trafficking, but it is this very same negligence that is in part responsible for the unprecedented number of overdose deaths of Americans across the nation.