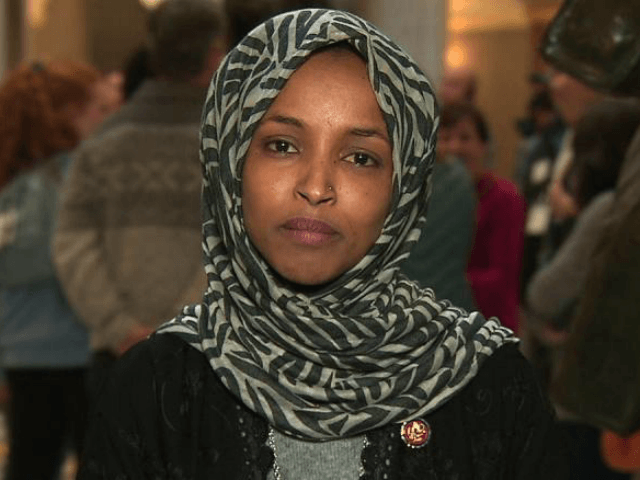 Radical leftist Rep. Ilhan Omar (D-MN) received an opportunity to redeem herself Thursday after displaying a shocking lack of knowledge on the situation in Venezuela on Twitter, referring to the Socialist International member party currently leading the opposition against that nation’s dictatorship as “far-right.”

Omar – who, despite a long record of antisemitic remarks and no practical experience with foreign policy, remains a member of the House Foreign Affair Committee – received time to question three expert witnesses for a panel that day titled “Venezuela at a Crossroads.” She could have used the time to offer a leftist defense of the brutal Nicolás Maduro regime in that country, or at least make the tired argument that his predecessor, the late dictator Hugo Chávez, was not so bad. It was a golden opportunity to prove to the American people she knew more about Venezuela’s modern history than she let on in casual Twitter opinions and prove that she deserved a voice on a panel about the U.S. role in that country.

Instead, when she received her time, she used it to attack one of the panelists, U.S. special envoy for Venezuela Elliott Abrams, for alleged stances he took on American policy in Central America in the 1980s.

Omar insisted that there was no reason for Americans to believe any analysis on Venezuela that Abrams was there to offer and repeatedly berated him for insufficiently opposing a hypothetical “genocide” in the country. She detailed the gruesome events of the 1981 El Mozote massacre in El Salvador, all but blaming Abrams for what transpired, but never offered clarity as to what relevance that event had to the situation in modern-day Venezuela. Ultimately, she did not address the other two panelists offering expert testimony and made no substantive statements on the situation in Venezuela today – or the situation in Venezuela nearly four decades ago, as she did with El Salvador.

Her outburst at Abrams – forbidding him from speaking after essentially calling him a liar – was a missed opportunity for her to prove detractors wrong about her shallow understanding of complex Latin American issues. By becoming the most talked about segment of the hearing, it also deprived the Venezuelan people of a platform for their woes to reach the mainstream American public. Most regrettably for Democrats, it also overshadowed more effective and informed attempts at discrediting Abrams or defending socialism in Venezuela from her colleagues, notably Reps. Gregory Meeks (D-NY) and Joaquin Castro (D-TX).

Omar did not, at least, forget to mention Venezuela entirely in her comments, but she presented the country as an afterthought. She asks Abrams, “Would you support an armed faction within Venezuela that engages in war crimes, crimes against humanity, or genocide, if you believed they were serving U.S. interests?”

She repeatedly uses the word “genocide” as a hypothetical situation in Venezuela.

Omar did not mention Maduro or Venezuela’s legitimate president, Juan Guaidó, by name. She did not address the humanitarian crisis in that country, leaving most Venezuelans with no access to basic medications and so deprived of food the average citizen lost 24 pounds in 2017. As one of House’s new “democratic socialist” members, she could have also taken Maduro’s side, asked about the dictator’s theory that the U.S. is hiding soldiers in shipments of humanitarian aid, claims that U.S. sanctions are solely to blame for the lack of food in the country or reports that the Trump administration had corresponded with soldiers seeking to overthrow Maduro last year. Yet she did not offer any signs she was interested in these reports, either.

The repeated use of the word “genocide” to describe a potential situation in Venezuela also reveals ignorance about the religious, ethnic, racial, and social divides in the country. With the exception of the use of violence against indigenous dissidents in Amazonas state by Maduro’s repressive military, Venezuela’s social divides are largely economic. Both the socialists and the opposition leadership are a mixture of people of European, African, Middle Eastern, and Native American backgrounds, often contained in the same person. Most in the country are overwhelmingly Catholic, with pockets of Muslim communities that largely have no tensions with the majority.

The only high-profile instances of bigotry have been displays of antisemitism from both Hugo Chávez and Nicolás Maduro, notably against opposition presidential candidate Henrique Capriles Radonski. Omar did not appear concerned about Venezuela’s Jewish population under the rule of a virulently anti-Israel political party with a record of antisemitism.

Yet Omar has become the face of the pro-Venezuelan socialist opposition faction within her party, eclipsing even extremist presidential candidate Rep. Tulsi Gabbard (D-HI), now more famous for supporting Maduro ally Bashar al-Assad of Syria than the Venezuelan tyrant. Omar’s rise is a public relations nightmare for the Democrats, who appeared to have prepared to attack Abrams more coherently than Omar did, but have received no attention for their efforts.

Rep. Castro attempted nearly an exact replica of the line of questioning that Omar attempted, but had the foresight to discuss Venezuela specifically, stating that Maduro “has oppressed his people” but he felt that “the role of the United States is not to hand-pick the next leader of Venezuela.” Rather than accuse Abrams of supporting genocide,” Castro asked him “whether you are aware of transfers of any weapons or defense equipment” to the Venezuelan opposition.

“I want to be respectful of you but also honest … you have a record of such actions,” Castro noted. Abrams replied politely to his question, stating merely that he had no information regarding any such transfers.

Rep. David Cicilline (D-RI) also attacked the United States in his remarks, but used a measured tone and did not personalize the attack against Abrams.

“It is not the job of the United States to choose leaders in other countries. The United States has a long and not altogether positive history of involvement in Latin America,” he told the panelists, asking Abrams whether he could promise Trump would not use military action without congressional approval. Abrams, who works in the Department of State and not the Pentagon, stated he was not in a position to answer.

Rep. Meeks did not attack Abrams, but instead used his time to attempt to rehabilitate the image of late socialist tyrant Hugo Chávez. He noted, correctly, that Chávez became president of Venezuela “fair and square,” and claimed that he had personally witnessed improvements in the lives of poor Venezuelans during a Chávez-era visit to the country. He ceded that, “under Nicolás Maduro, I have seen the situation continue to deteriorate and the people of Venezuela are suffering and I’ve seen him avoid some democratic elections.” He claimed his concerns with U.S. support for democracy in Venezuela stemmed from support for a failed coup against Chávez in 2002.

For viewers who do not know that Chávez himself attempted a failed coup in 1992 and created the fraudulent election system Maduro uses now, Meeks would have come off as rational and may have even swayed some undecided minds on the legacy of socialism in Venezuela.

Thanks to Omar, few will remember – or see any of – Meeks’ remarks, or Castro’s, or Cicilline’s. Few will even hear the word “Venezuela” in relation to this meeting because her insistence on berating an expert on 20th-century Central American history is now the headline. The Venezuelan people lose the most from this incident, of course, but the Democrats have much to learn about Omar’s impact on their party if they have any intention of keeping it from sinking their 2020 prospects.