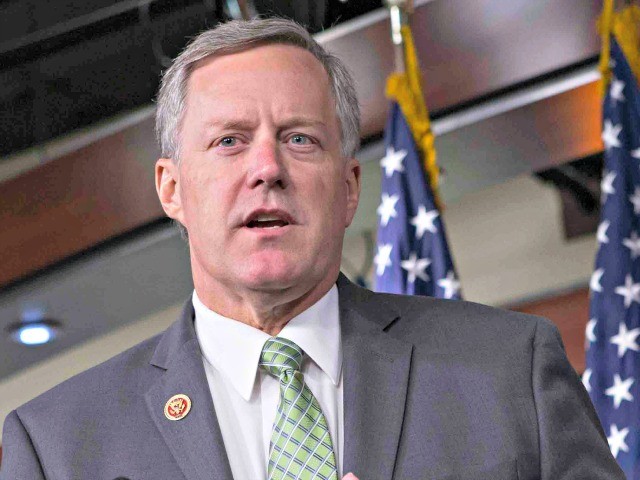 Rep. Mark Meadows (R-NC), a strong conservative and ally of President Donald Trump’s in Congress, was re-elected by his fellow House Freedom Caucus members as Chairman of that organization on Monday.

Meadows, who is the group’s second chairman since its founding in 2015, has taken the Caucus to new levels that its also powerful first chairman Rep. Jim Jordan (R-OH) did not yet reach in the first two years.

Meadows has leveraged the Freedom Caucus’s 40-something votes to punish the establishment in Washington during big picture negotiations, fighting to ensure that Democrats and establishment Republican cannot effectively sideline Trump’s and other conservative views when Congress makes federal policy.

The affable Meadows first rose to national prominence in 2015, when he introduced what is known as a “motion to vacate the chair,” a resolution that if voted upon and passed would have removed then-Speaker John Boehner from office. Meadows introduced the resolution after Boehner retaliated against him and other conservatives for voting against leadership on major legislation during the Barack Obama presidency, sparking a grassroots revolution that eventually ended in Boehner resigning from the job before being forcibly removed by the cavalry of conservatives Meadows amassed.

During that fight, Breitbart News profiled Meadows in his district in western North Carolina, traveling with him during a day of constituent meetings and an evening town hall. In the interview in his district, Meadows told Breitbart News his mission is to make Congress more accountable to the people.

“I think everybody starts out doing that, because they’re real sensitive to the fact that they just got into office and say, ‘Golly, I want to be a voice for the people,’” Meadows said. “The longer they’re there, the less likely you are to listen. For me, I’ve had to redouble my effort and not say, okay, pay attention to what are the priorities in Washington, D.C., but really try to listen to what are the priorities here?”

Meadows’ efforts to remove Boehner proved successful. Boehner resigned in the fall of 2015, as Trump–a fellow outsider, like Meadows–was similarly on the rise on the presidential campaign trail. While Boehner’s ouster cleared the way for his establishment ally, now former Speaker Paul Ryan assumed command in the House. With Ryan’s efforts to push establishment priorities–frequently at odds with the campaign vision laid out by President Trump–it was Meadows who often kept the Speaker in check.

In early 2017, as President Trump began an effort to repeal and replace Obamacare–one that would ultimately fail in the Senate thanks to obstruction by the late Sen. John McCain (R-AZ) in one of his last acts–Ryan’s initial plan was near collapse in the House.

Ryan had been losing GOP members for weeks leading up to the first votes on the healthcare bill, and he struggled to pull enough together to pass it. Initial votes on it were canceled, and it seemed the effort to repeal Obamacare had died in the House before Meadows emerged with a solution.

He negotiated with the moderate GOP Tuesday Group’s then-co-chairman then Rep. Tom MacArthur (R-NJ) to develop some big-picture changes to the leadership bill, and then it achieved final passage. Meadows’ role in getting this done was not lost on Trump, as the president held a Rose Garden ceremony at the White House with all the House GOP leadership to celebrate the House passage of the bill–at which Meadows was, along with MacArthur, afforded a speaking slot.

It was not just healthcare where Meadows has had Trump’s back at key moments in the House in the first couple years of his administration. Meadows was a key champion of the Trump tax cuts and has also been one of Trump’s main wing men on fighting corruption at the center of the scandal now known as “Spygate”– wherin Department of Justice and FBI officials, hellbent on taking Trump down first during the presidential campaign in 2016 then after he won– seemingly abused their positions of power to surveil the president and peddle inaccurate dirt on him in what would eventually lead to the formation of Special Counsel Robert Mueller’s probe of Russian interference in the 2016 election.

Meadows has also advised the president on key matters of spending bill fights, including Trump’s fight for a border wall, steadfastly remaining front and center pushing for the interests of Trump’s agenda even when other Republicans threw in the towel or refused to fight at all.

The notion that our southern border needs ZERO additional physical barriers is counter-intuitive and not based in reality.

POTUS wants technology and personnel too. Parts of a wall = a common sense PART of the solution. End the political grandstanding. Let’s find a compromise.

Now that Democrats have retaken the House, and Nancy Pelosi has reclaimed the Speaker’s gavel, Meadows remaining in the Freedom Caucus chair position is perhaps more vital than ever for the president. Pelosi got a pound of flesh from Trump in her first battle with him, securing a three-week spending bill deal that ended the longest government shutdown in U.S. history–a deal that contains zero dollars for the president’s planned wall along the U.S. border with Mexico. Trump insists he is still fighting, and he may win in the end, but having allies like Meadows in key positions throughout the minority in the House may prove crucial at key moments yet to unfold in the fight.