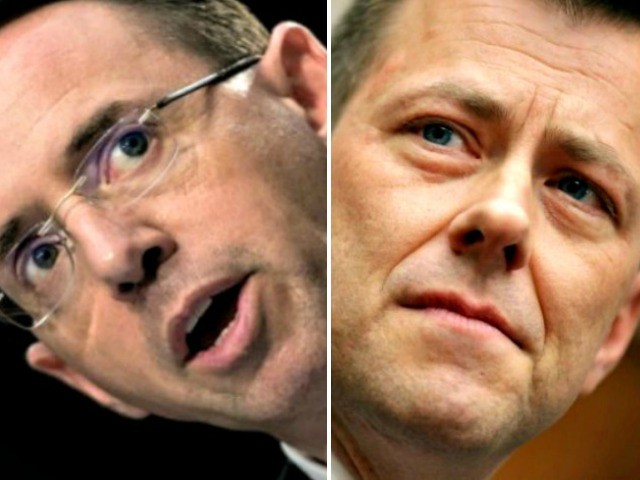 House Republican investigators state ex-Federal Bureau of Investigation (FBI) General Counsel James Baker offered an “extremely troubling” testimony on Wednesday regarding the bureau’s handling of the Russia investigation, according to a report.

According to Freedom Caucus leader Rep. Mark Meadows (R-NC), details of the probe shared by Baker were “explosive in nature,” and “confirmed that things were done in an abnormal fashion.”

Meadows claimed the “abnormal” handling of the probe into alleged coordination between Russian officials and the Trump presidential campaign was “a reflection of inherent bias that seems to be evident in certain circles.” The FBI agent who opened the Russia case, Peter Strzok, FBI lawyer Lisa Page and others sent politically charged texts, and have since left the bureau.
…

The lawmakers would not provide many specifics about the private transcribed interview, citing a confidentiality agreement with Baker and his attorneys. However, they indicated in broad terms that Baker was cooperative and forthcoming about the genesis of the Russia case in 2016, and about the surveillance warrant application for Trump campaign aide Carter Page in October 2016.

Baker is at the heart of surveillance abuse allegations, and his deposition lays the groundwork for next week’s planned closed-door interview with Deputy Attorney General Rod Rosenstein. Baker, as the FBI’s top lawyer, helped secure the Foreign Intelligence Surveillance Act (FISA) warrant on Page, as well as three subsequent renewals.

“During the time that the FBI was putting — that DOJ and FBI were putting together the FISA (surveillance warrant) during the time prior to the election — there was another source giving information directly to the FBI, which we found the source to be pretty explosive,” Rep. Jim Jordan told the news outlet.

Strzok, a longtime FBI agent who was removed from the Russia investigation over anti-Trump text messages, was fired by the agency in August. The FBI had been reviewing Strzok’s employment after the politically charged text messages were discovered last year.

Strzok was fired late Friday by FBI Deputy Director David Bowdich, said his lawyer Aitan Goelman. He said the 21-year veteran of the FBI was removed because of political pressure and “to punish Special Agent Strzok for political speech protected by the First Amendment.”

Goelman also said the FBI had overruled the agency’s Office of Professional Responsibility, or OPR, which he said had determined that a 60-day suspension and demotion from supervisory duties was “the appropriate punishment.”

In a statement, the FBI said Strzok was subject to the standard agency review and defended the decision to overrule the OPR. “The Deputy Director, as the senior career FBI official, has the delegated authority to review and modify any disciplinary findings and/or penalty as deemed necessary in the best interest of the FBI,” the statement said.

Strzok, who exchanged text messages with FBI lawyer Lisa Page, vigorously defended himself at a combative House hearing in July that spanned 10 hours. Strzok repeatedly insisted the texts, including ones in which he called then-candidate Donald Trump a “disaster,” did not reflect political bias and had not infected his work.

Texts between the two included their observations of the 2016 election and criticism of Trump. They used words like “idiot,” ″loathsome,” ″menace” and “disaster” to describe him. In one text four days before the election, Page told Strzok that the “American presidential election, and thus, the state of the world, actually hangs in the balance.”

In another text, Page wrote Strzok in August 2016: “(Trump’s) not ever going to become president, right? Right?!”

Strzok worked on the early stages of the Russia investigation in 2016 and worked on the special counsel’s team for a few months after Robert Mueller was appointed in May 2017.

Strzok was also a lead investigator on the probe into Democrat Hillary Clinton’s email server in 2016. A June report issued by Justice Department inspector general Michael Horowitz blamed Strzok and Page for creating an appearance of impropriety through their texts but found the outcome of the Clinton investigation was not marred by bias.

The former Secretary of State was ultimately cleared in the probe.

Meadows, one of the leading critics of the FBI investigations, said Strzok was fired “because of what his own written words plainly showed: he was willing to use his official FBI position to try and stop President Trump from getting elected. He tarnished the FBI’s sterling reputation and severely damaged public trust in an institution where trust is paramount.”

In a terse statement to the Times, Rosenstein vehemently denied the report. “I will not further comment on a story based on anonymous sources who are obviously biased against the department and are advancing their own personal agenda,” he told the paper. “But let me be clear about this: Based on my personal dealings with the president, there is no basis to invoke the 25th Amendment.”

Following his remarks at the United Nations General Assembly in New York, the president told reporters last week that he would prefer to keep Rosenstein as the Justice Department’s number two. “I would much prefer keeping Rod Rosenstein,” President Trump said. “He said he did not say it. He said he does not believe that.”

“My preference would be to keep him and to let him finish up,” the president added, referring to the Russia investigation led by Special Counsel Robert Mueller.

On Wednesday, White House Press Secretary Sarah Sanders said President Trump has no plans to meet Rosenstein to further discuss the Times report. “If there’s a meeting, we’ll let you know,” Sanders told reporters. “But at this point, they continue to work together and both show up every day and do their jobs.”