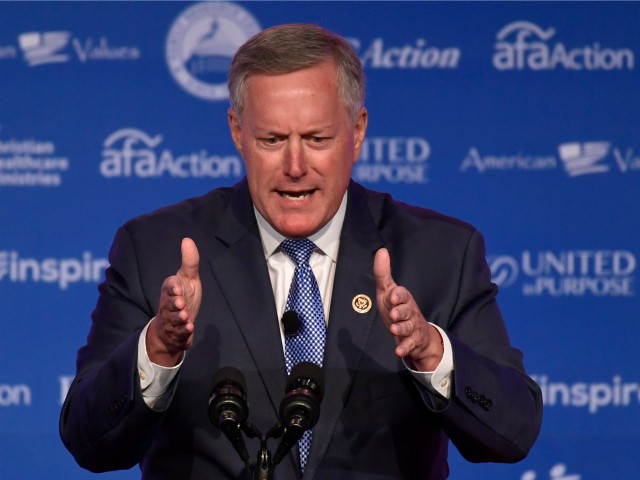 House Freedom Caucus chairman Mark Meadows (R-NC) said at the Values Voter Summit in Washington, DC, on Saturday that Deputy Attorney General Rod Rosenstein needs to testify before Congress “under oath” regarding reports that he wanted to secretly record President Donald Trump and recruit other top officials to use the 25th Amendment to oust the president.

The New York Times revealed on Friday that Rosenstein shared plans with “other Justice Department and FBI officials” to secretly tape Trump and oust the president using the 25th Amendment. Rosenstein denied the story; however, a Department of Justice (DOJ) spokeswoman did not deny that the deputy attorney general suggested taping the president, instead suggesting the remark was in jest.

“The headlines came out that Rod Rosenstein talked about actually wearing a wire and going into the Oval Office and secretly record this president,” Meadows said.

The North Carolina conservative charged, “I think the time is now that we need to hold those at DOJ and FBI accountable.”

Meadows also called the “Russia hoax” a “fake news story of gargantuan proportions.”
In reaction to the news, Trump said that “there’s a lingering stench” at the FBI and DOJ, adding, “And we’re going to get rid of that, too.”

Jordan said in a statement in July, “The DOJ is keeping information from Congress. Enough is enough. It’s time to hold Mr. Rosenstein accountable for blocking Congress’s constitutional oversight role.”

President Trump ordered the release of some classified FISA documents as well as text messages of FBI officials involved in the investigation of his campaign advisers during the election, although he will allow the DOJ to review the documents on an expedited basis.

“In the end, I can always declassify if it proves necessary,” Trump wrote in a tweet on Friday. “Speed is very important to me – and everyone!”