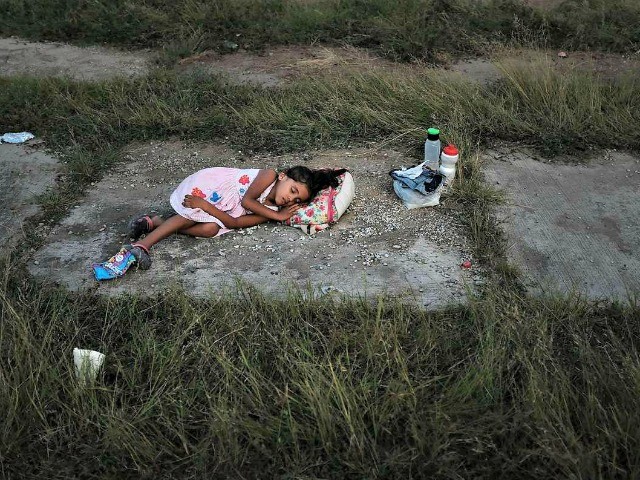 President Donald Trump and Homeland Security Secretary Kirstjen Nielsen must wrap the blame for the dehydration death of a seven-year-old migrant child around the necks of her father, Ninth Circuit judges, and open-border progressives, says Mark Krikorian, director of the Center for Immigration Studies.

Democrats “are trying to turn this poor little girl into a martyr for open borders,” he said. Most Americans are not closely following the details, and they can be swayed by media-magnified emotional arguments from the Democrats, Krikorian said. Democrats, he said, are:

…always on the lookout for a martyr for their cause that they can use to manipulate people’s emotion and this poor little girl is the latest candidate.

[The administration has] said, ‘This is a terrible tragedy, and is why we beg you not to illegally cross the border.’ That is fine for the DHS, but the Secretary or the President needs to say affirmatively ‘This father killed his little girl. It is his fault. He deserves to burn in hell.’ You can’t be apologetic here …. [because Democrats] want to bully Americans through emotional manipulation. You cannot win over the public if you are in fetal crouch apologizing for yourself. You need to make clear where the blame is.

Democrats are shamelessly using the dead child because “they believe in open borders,” Krikorian said. For progressives, the cause of open borders “is an emotional thing — it is not about votes or cheap labor, [they believe] it is immoral to keep people out, period.”

Democrats emotionally blame border officials & routine protections for the death of a migrant child. But they & media ignore the huge incentives created by themselves, judges, biz & GOP for poor migrants to risk their lives to get a $7-hour job in the US. https://t.co/cFz7Rqb1u9

The progressives’ urge for open borders is entwined with their belief that Trump and his many millions of supporters are morally corrupt, Krikorian said. They feel that “Trump is evil and this [girl’s death] gives them a moral frisson, the opportunity to denounce the latest crime by history’s greatest monster,” he said.

Instead of defending themselves with cold facts and dry logic, administration officials must put the emotional blame for the child’s death where it belongs, he said.

“The father is the chief culprit — anybody who is using his child as a get-out-of-jail card and is dragging her through the inhospitable desert is a dirtbag,” he said, adding;

But what are the incentives that are leading him to do that? Clearly not desperation to get out of Guatemala because he was in Mexico where he could have applied for asylum. He was doing this because our policies incentivize this kind of conduct. [The Democratic-backed] Flores [court decision which forces officers to release migrants with children] and other loopholes make it perfectly rational to do this kind of thing. Judge Dolly Gee [who created the Flores loophole] is probably the Number 2 culprit because she was specifically asked by the [Trump] administration to modify the Flores agreement because of the results it is having at the border and she refused.

Next is Congress more generally. It has more diffuse responsibility but we’ve known for quite a while these loopholes have not been plugged. There has been more willingness among the Republicans … but [GOP] leadership chose not to make it a priority.

The Border Patrol cannot be blamed, because it annually saves hundreds of migrants from dying as they try to sneak through U.S. border defenses, even as many others die in the parched scrubland as they try to reach lower-wage jobs in Democrat-run cities, Krikorian said. “The border patrol is a dry land Coast Guard that saves more illegal immigrants that this braying anti-borders mob. These are just regular guys — a third at least is Hispanic, and so the claim of a racial thing is beneath contempt.”

Democrats want to pin the blame on the administration because they want to gradually chop away barriers on the border, he said.

The Democrats are using this cynically as a cudgel against the very idea of immigration enforcement. It is shameless. It is really shameless.

The left is objectively in favor of open borders. They deny it if you ask them straight out, but they are opposed to any meaningful measure to enforce the borders. Any time there is a tragedy like this they immediately turn it into an excuse for weakening the borders — and say at the same when you point to an illegal immigrant criminal [as a reason] for tightening the borders, they charge you with acting irresponsibly.

Democrats feel bad about this [death] – they are genuinely in an uproar — but at the same time, they are cynically manipulating this tragedy for their political purposes. I don’t doubt they feel bad about this, but [they believe what] Rahm Emanuel said, ‘Never let a crisis go to waste.’ The logical conclusion of the Democrats’ outrage over this is that there should be no border enforcement because any rules about border control will also create people who evade them, and it is an evasion of the laws that is the responsible (mechanism] for this tragedy. The only logical conclusion is that we must have open borders.

Krikorian’s point was highlighted by a December 14 statement from Amnesty International, which was formed to win amnesties for prisoners in Soviet jails. The statement said:

“This was not the first death at the southern border and sadly, it will not be the last. Children seeking protection should never be detained …

“If the US builds a wall along the southern border, families seeking protection will face an impossible choice: take any risks necessary to seek safety or return back home to face the stark possibility of death. The solution is simple. The United States must end pushbacks at the border, allow families and individuals to have their asylum claims heard in a timely manner, and abandon plans to build a wall shutting out those seeking safety at our border. The lives of thousands of people, including children, are at stake.”

Similarly, many Democrats are trying to blame the Border Patrol because the child was in a large group of migrants who walked through the scrub to put themselves in the custody of four border patrol officers. The second-ranking Democrat in the House shared that claim:

Immigration also steers investment and wealth away from towns in heartland states because coastal investors can more easily hire and supervise the large immigrant populations who prefer to live in coastal cities. In turn, that investment flow drives up coastal real-estate prices, pricing poor U.S. Latinos and blacks out of prosperous cities, such as Berkeley and Oakland.