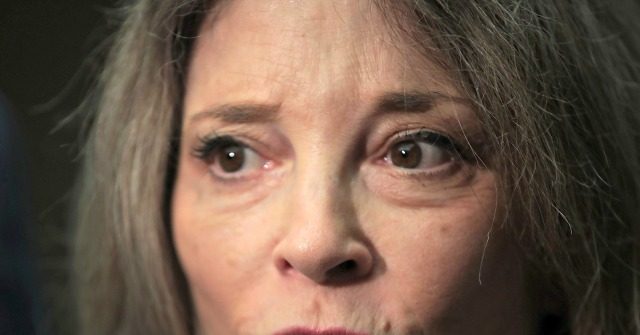 Self-help author Marianne Williamson, one of more than 20 Democrats running in the 2020 presidential election, called President Trump’s July 4th tribute to the military “heartbreaking” and “repugnant” in a tweet on Wednesday.

“Watching army tanks being hauled thru DC for Trump’s July 4 celebration is heartbreaking & repugnant,” she tweeted.

She also encouraged people to join her via livestream for a “true celebration”:

Watching army tanks being hauled thru DC for Trump’s July 4 celebration is heartbreaking & repugnant. Join me via livestream tomorrow for a true celebration of who we are and what we stand for. https://t.co/esuOA4ILj0 pic.twitter.com/slgemLFNvr

Williamson’s tweet puts her among Democrats who are criticizing Trump’s plans to honor the U.S. armed forces on the Fourth of July. In addition to the annual parade, a Capitol Fourth PBS show, and a fireworks display, Trump has added an hour-long event featuring members of the armed services.

The event, called “Salute to America,” will feature military bands, military aircraft flyovers, and other performances. There will also be military hardware placed on the National Mall, which will include two M1A2 Abrams tanks and two M2 Bradley Fighting Vehicles.

Williamson did not specify what her “true celebration” would look like.

She was widely mocked after the second Democrat debate, where she argued that her plan to defeat Trump was to “harness love.”

Williamson is slated to appear in the second round of Democrat debates in July.