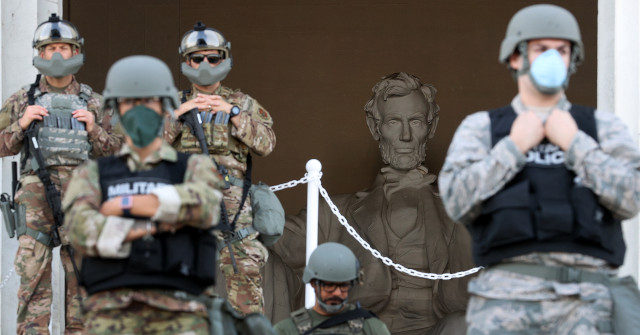 Claims about the use of tear gas on “peaceful protesters” disseminated by Democrat leaders but denied by U.S. Park Police galvanized people to join the estimated 2,000 demonstrators who descended on the nation’s capital on Tuesday, considered the most massive crowd yet.

The Democrat-allied mainstream media have also been pushing the tear gas allegations – even after U.S. Park Police denied it on Tuesday.

“Officers then employed the use of smoke canisters and pepper balls,” he noted, adding that authorities subsequently erected a fence around Lafayette Park near the White House.

Despite Tuesday’s 7:00 p.m. curfew imposed by Washington, DC Mayor Muriel Bowser, demonstrators, some of them rambunctious, gathered mainly outside the fence erected around Lafayette Park near the White House.

Early on Wednesday, the Washington Post described the overall crowd on Tuesday as “the largest and most boisterous crowd to gather in the nation’s capital during five straight days of protests over George Floyd’s death in Minneapolis police custody.”

Some protesters indicated that they were motivated to join the demonstrations on Tuesday by the alleged use of tear gas.

“It ignited a fire in us,” Alondra Pacheco, 20, told NBC News, describing the events of the previous day as law enforcement coming “at peaceful people just so [Trump] could walk across the street.”

“I’ve been giving what money I can to groups but after what [Trump] did — deploying the military against Americans — there was just no way I was staying home. He just really came for Americans,” a protester who asked to remain anonymous told NBC News.

According to the Washington Post, “many protesters” indicated they joined the crowds Tuesday because of the tear gas claim.

“We couldn’t just sit home and do nothing,” Naomi Spates, a protestor, told the Post.

“After we saw what happened — police shooting and arresting and all that — I didn’t want to be the person who just sat at home,” Chase Ingram, who was protesting alongside Spates, added.

“The reason I came out today is because that happened yesterday,” Brian Norwood, described as a “white” D.C. resident, told the Post. “I am here to be shot with rubber bullets and tear gas.”

“We were not coming down here for four days,because we were frightened it was going to be too compromising for our health,” Louis de Merode, 71, added. “Then things started piling up in our brains and our hearts, and we both decided that we couldn’t not do it.”

TIME magazine also spoke to D.C. residents who were angry about the allegedly “brutal treatment of peaceful protesters” on Monday.

Jay Hamilton, who joined the demonstrations on Tuesday, blamed the police response for the rioting and looting that has gripped cities across the United States like D.C.

“This is America, right? America’s all teams. So depending on the team that you’re on, that’s how you’re going to see [the riots]. For me, it’s not [detracting from the peaceful protests], it’s part of the protest,” he told TIME.

He pointed to the gate around the park as an example of law enforcement provoking protesters into violence, arguing it was unnecessary to put it up. As he spoke, a line of troopers armed in riot gear moved through the protesters. People in the crowd jeered. “Why [do] they even send those guys down the block like that? That’s that bullshit right there.”

The death of Floyd, a black man, after now-fired police officer Derek Chauvin kneed his neck for several minutes, has ignited protests in dozens of cities across America that have devolved into rioting and looting, mostly at night.

At least 11 people, many of them black, have reportedly been killed in the demonstrations.

Heavy police and National Guard presence in recent days has toned down most of the rioting and looting.

While the protests were mainly calm during the day on Tuesday in the nation’s capital, things changed at night, consistent with previous days.

By nightfall, some of the demonstrators on Tuesday were hurling objects at authorities as they shook and banged on the fence erected around Lafayette Park near the White House.