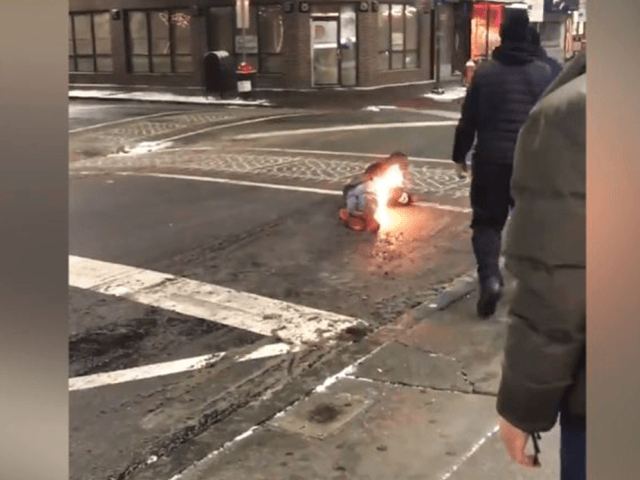 A man’s clothes caught fire shortly after he was tasered outside a Philadelphia restaurant Friday evening, according to a video posted to Twitter on Saturday.

So I witnessed a man catch on fire after being tased last night… #JimsSteaks #SouthSt pic.twitter.com/3DjQTm1RHY

The video, posted by witness Pat Tackney, shows two security guards from Jim’s Steaks on South Street in Philadelphia trying to subdue the man outside the restaurant before one of the guards took out his Taser to ensure the man would not flee.

The man then rolled around on the pavement for several seconds to put out the fire. It is unclear whether the man was injured as a result of his clothes catching fire.

Ken Silver, the president of Jim’s Steaks, told the Philadelphia Inquirer that the steakhouse’s security cameras captured footage of the incident as well, and that the restaurant would “cooperate” with law enforcement.

“We are currently reviewing the after-store-hours incident that occurred outside of Jim’s South St. early morning on Feb. 2, 2019,” Silver said in a statement.

“We are and will continue to cooperate fully with the Philadelphia Police Department as needed. We take the safety of our customers and employees very seriously and work dutifully to safeguard their well-being,” he continued. “In doing so we will continue operate with the highest standards as a local merchant, employer and neighbor.”

A spokesperson for the Philadelphia Police Department said that the incident on South Street had not been reported to the police as of Saturday evening.

It is uncommon for those stunned with a Taser to catch fire, but there have been at least 15 instances where that has happened, the Associated Press reported in 2017. Five of those people died, and in all of those instances, the people stunned were near flammable objects.