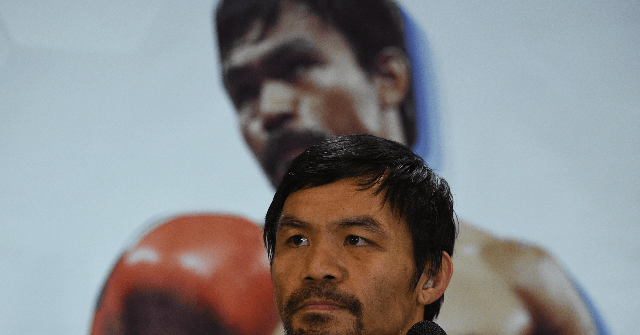 Philippine Senator Manny Pacquiao, more commonly known outside of the Philippines as one of the most successful boxing champions in modern history, introduced a bill in his nation’s legislature Wednesday to return capital punishment to the country for major drug trafficking convictions.

Pacquiao launched the initiative along with newly elected Senator Christopher “Bong” Go, a former longtime aide to President Rodrigo Duterte. Pacquiao is a member of Duterte’s PDP-Laban party and a staunch supporter of the president and in particular the anti-drug trafficking campaign that won him the presidency in 2016.

During his presidency, Duterte has encouraged the extrajudicial killing of drug suspects by police and civilians alike, though more recently he has refocused his energy on calling for the killing of Catholic bishops. He has met most international community attempts to address human rights concerns with his anti-drug campaign with profanity-laced tirades.

Go and Pacquiao have now launched a campaign to legalize state killing of individuals convicted of drug trafficking in cases of extreme crimes. According to the Philippine Star, Pacquiao’s bill would allow courts to sentence drug suspects to life in prison or capital punishment in cases where they are convicted of importing and selling illegal drugs. Associates found guilty of working to “protect or coddle” the drug trade would also face life imprisonment or death.

Go’s bill is more generally targeted to reintroduce capital punishment into the Filipino legal system for “the most heinous crimes, for being grievous, odious, and hateful offenses.”

In anticipation of a new session of Congress, Pacquiao also introduced at least two other bills he plans to bring to the Senate for a vote. One of them would ban smoking cigarettes and vapes in both public and enclosed spaces. The bill intends to “lessen, if not totally eradicate,” unwanted exposure to tobacco smoke and would also ban tobacco advertising targeting minors and keep advertising away from schools and playgrounds, according to the Philippine Inquirer.

Pacquiao’s other bill would establish a federal Department of Homeland Security, which Manila currently does not have. The initiative is related to the anti-drug campaign, intended to expand Duterte’s ability to combat not only terrorist threats like the Islamic State (ISIS), which has fought to establish itself in the majority-Catholic nation for years, but transnational drug traffickers who Pacquiao said abuse of countries that lack the infrastructure to stop them.

“International terrorists and the perpetrators of transnational crimes and especially of the cross-border trafficking of prohibited drugs, reportedly look for countries where border authorities are not well-supported or strengthened by their governments to stop them,” Pacquiao said in the accompanying explanatory note on the homeland security bill.

Pacquiao is preparing for a session of Congress that will herald in a new slate of fresh faces, many of them allies of Duterte’s who left other jobs to go into Congress. Go was an aide to Duterte in Davao City, where he served as mayor for over 20 years, and went with him to the national stage after the 2016 election. The Philippine broadcaster ABS-CBN described Go as “Duterte’s single most important candidate” in the midterms.

Also in the new class of lawmakers is Paolo Duterte, the president’s son, who has publicly toyed with running for the House speakership, and Ronald Dela Rosa, Duterte’s former head of the Philippine National Police (PNP).

Throughout his legislative career, Pacquiao has consistently defended Duterte’s policies. He criticized opponents as not being “grateful” that Duterte was a “firm, strong president” after Duterte declared martial law in response to the Islamic State takeover of the Muslim city of Marawi. Shortly following his election, Pacquiao said that Duterte was “anointed” to lead the Philippines.

“God put him there for a reason, for purpose — to discipline the people,” he said in September 2016. “In the past administrations, people didn’t respect the law, the leader, the authorities. … What Duterte is trying to do is let the people know — and put it in their hearts and minds — that you need to respect the law of the land.”

Pacquiao won his Senate seat shortly before Duterte took office in 2016, having served as a lawmaker in the House of Representatives before them. Duterte endorsed his Senate run.

Pacquiao (61-7-2, 39 KOs) has not hung up his boxing gloves to serve as a lawmaker. He is currently the WBA welterweight champion of the world and is scheduled to challenge super welterweight champion Keith Thurman (29-0, 22 KOs) on July 20 in Las Vegas, Nevada, his third fight in the past year. Sports bettors appear to expect Thurman to win, though Pacquiao and longtime trainer Freddy Roach say they are going into the fight expecting a victory.