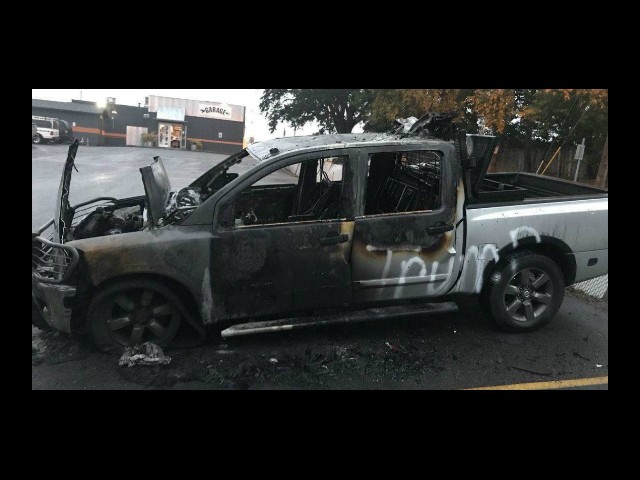 A truck owner whose vehicle was set ablaze and vandalized with spray paint in Washington says he was targeted because of his Donald Trump bumper stickers.

Vancouver man says his truck was torched because of Trump stickers https://t.co/Qll1iZuha0 pic.twitter.com/AO3AVroC9a

“If you say anything that someone doesn’t like, you are ultimately a target,” truck owner Johnny MacKay told Portland’s KOIN-TV. “You’re automatically the enemy, and they have to hurt you.”

The Vancouver, Washington, resident found his vehicle set on fire outside the Garage Bar and Grille after he had left the truck in the bar’s parking lot the night before.

MacKay told the media he felt overserved the night before and had taken an Uber home, but when he returned the next day to retrieve his vehicle, he found it destroyed.

“All of a sudden I saw the tires were melted, the windows were shattered, and I was just in shock,” MacKay told the media.

Not only was his truck burned to ruination, but it was also spray-painted with anti-Trump slogans. The truck owner said he did not vote for Trump in 2016 but does support him now that he is in office.

“I literally just put them on this weekend,” he said of the bumper stickers. “If I would’ve known somebody would’ve taken politics this far — I saw them, I thought they were funny and apparently somebody didn’t get the joke.”

A local resident heard the ruckus when the firebomb went off. “All of a sudden I hear a loud bomb and the windows shake,” Randy Sanchagrin said:

Check this video out! A Vancouver man believes his car was set on fire because if his @realDonaldTrump bumper stickers: “If you say anything that someone doesn’t like you are ultimately a target. You’re automatically the enemy and they have to hurt you.” #KOIN6News pic.twitter.com/gIa24VyDzp

For his part, MacKay is sure it was a political attack.

“(They) need help,” MacKay said. “Whether it was from drugs or a mental condition, this person needs to get help. If they blow up at this, who knows”: