A Florida resident decided to go big this year with his 4th of July decorations to show support for military and law enforcement.

Jason Stanley of Plant City, Florida, said he used 15 gallons of paint to create a massive American flag display on his lawn. 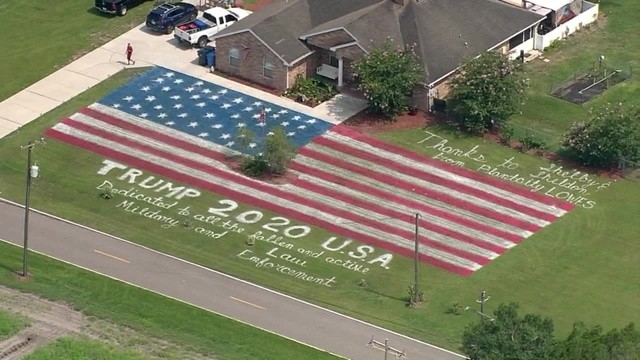 Jason Stanley of Plant City, Florida said he used 15 gallons of paint to create a massive American flag display on his lawn (Fox 32).

“I’m a true believer that if it wasn’t for soldiers and law enforcement being there for us and giving their lives on duty, that I wouldn’t be able to do this,” he told reporters.

Stanley said it took him and his daughter six hours to complete the project, adding that he wanted to dedicate the time because military and law enforcement sacrifice so much for the country.

“Without those people, we couldn’t take the time out of our lives,” Stanley commented. “The world is too ugly right now, the way people are — they don’t stop to think and cherish the things they have. One day isn’t enough to give thanks to those giving their lives.”

A Texas teenager had a similar idea when he decided to mow a flag into his front lawn after a friend who served in the Army was killed recently while on duty.

Cameron James, 17, told reporters he changed the settings on the mower to create the flag that took him four hours to complete.

“Our mower has different settings, so I just changed the settings so the grass would be different lengths for the stripes,” he said, adding, “It was a lot of work. But it was worth it.”

President Trump is planning to celebrate July 4th during a “Salute to America” event that will take place at the Lincoln Memorial on Thursday evening. Plans include an address given by the president, military aircraft flyovers, and military musical performances, Breitbart News reported.

“We’re gonna have a great Fourth of July in Washington, DC. It’ll be like no other. It’ll be special, and, I hope, follow a lot of people … and it’s going to be about this country, and it’s a salute to America,” the president said Monday.

In response to his critics who said the celebration is too costly, President Trump tweeted Wednesday that the cost “will be very little compared to what it is worth.”

“We own the planes, we have the pilots, the airport is right next door (Andrews), all we need is the fuel. We own the tanks and all. Fireworks are donated by two of the greats,” he said.