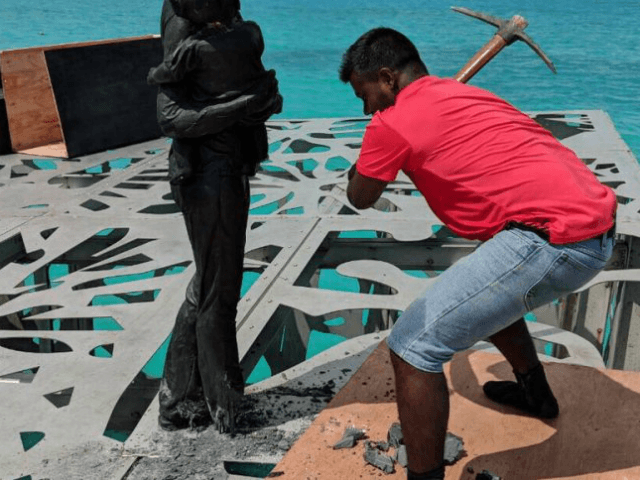 (AFP) COLOMBO, Sri Lanka — Police armed with pickaxes and power tools have destroyed a modern artwork by a celebrated British sculptor in the Maldives, after the outgoing president in the tourist haven declared the installation offensive to Islam.

Abdulla Yameen in July ordered the sculptures demolished but his ruling was not acted upon until Friday, on the eve of a presidential election which he lost to a liberal candidate.

A series of statues by Jason deCaires Taylor were placed inside a semi-submerged metal cube in July at a resort in the Maldives, an archipelago of 340,000 Sunni Muslims popular with tourists.

Islam, the official religion in the Maldives, bans the depiction of idols, and the work provoked some criticism from clerics even though the statues have no religious symbols or meaning.

Yameen said in July that “significant public sentiment” against the artwork known as “Coralarium” had guided his decision to destroy it.

It is unclear why the sculptures were not raised from the waters until Friday, just two days before Yameen was turfed out of office.

Police were photographed chipping away at the works with pickaxes and using power tools to remove them from the large and ornate cage housing them.

A video posted by state media showed several men tearing a statue off a plinth.

“I was extremely shocked and heartbroken to learn that my sculptures have been destroyed by the Maldivian authorities at the Coralarium, despite continued consultations and dialogue,” deCaires Taylor told AFP in a statement.

“The Coralarium was conceived to connect humans to the environment and a nurturing space for marine life to thrive. Nothing else!

“The Maldives is still beautiful, with a warm and friendly population, but it was a sad day for art and sad day for the environment.”

The import of statues is prohibited in the Maldives. Even depictions of the Buddha are banned despite a long legacy of Buddhism in the islands before Islam came to dominate the archipelago.

Despite the edict, huge cutouts of Yameen towered over the capital Male in the lead-up to Sunday’s poll, which he lost after five years of strongman rule marked by a regression from democracy.

Many of these cardboard posters depicting the ousted leader were torn down after he suffered a shock defeat to opposition candidate Ibrahim Mohamed Solih, an act of defiance unthinkable under his iron-fisted leadership.