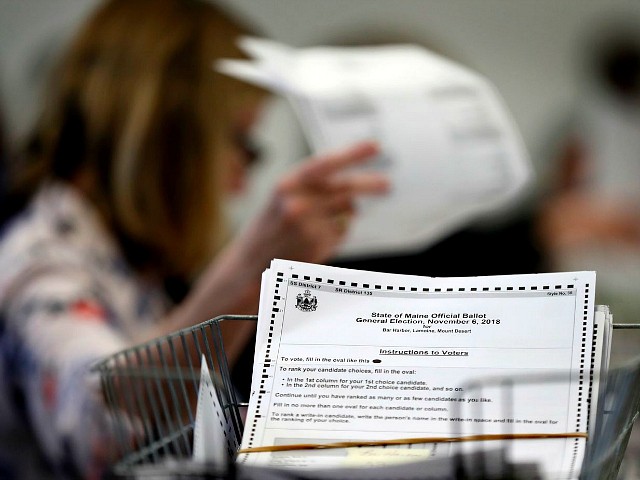 The recount in Maine’s controversial 2nd Congressional District race, where the state’s new “rank voting” system was used for the first time in American history, is proceeding faster than anticipated.

When the secretary of state in Maine, Democrat Matt Dunlap, announced the beginning of the recount last Thursday, his office said it would take about four weeks, putting its completion in January, possibly after the convening of the 116th session of Congress on January 3.

But late Monday, Dunlap’s office announced the recount was proceeding ahead of plan.

Spokeswoman Kristen Muszynski said early counting moved quickly thanks to some results being pre-sorted due to previous recounts.

But the process will likely slow down once machine counting gets underway.

As Breitbart News reported, “Secretary of State Matt Dunlap declared Democrat [Jared] Golden the winner in the November 6 election on November 15, despite the fact that [Bruce] Poliquin received 2,632 more votes than Golden on election day, due to the first-in-the-nation implementation of a controversial ‘rank voting’ system.”

Under the recently enacted “rank voting system,” however, Poliquin was not declared the victor because he received less than 50 percent of the votes cast on November 6.

Golden’s subsequent victory was due to the allocation of 10,232 votes that were cast as third and fourth choices under the rank voting system. Dunlap only allocated 4,695 of those votes to Republican Poliquin. Since 8,086 of those voters did not select second, third, or fourth choices in compliance with the 2016 “rank voting” state law, Dunlap threw them out.

These changes gave Golden a victory of more than 2,000 votes.

Poliquin and three voters in the Second Congressional District filed a lawsuit in federal court challenging the constitutionality of the 2016 Maine law that established the “rank voting system.”

In an earlier lawsuit, a state judge ruled that the “rank voting” system was a violation of the Maine Constitution, and the system was not used in the election of state legislators and statewide offices in the November 6 election.

The federal judge in the Poliquin challenge is expected to issue a ruling on the constitutionality of the “rank voting” system this week.

In the likely event that the recount confirms the victory by Golden as declared by the secretary of state on November 15, he will be sworn in as a member of the 116th session of the U.S. House of Representatives as soon as the recount is certified, pending the outcome of the federal court case.