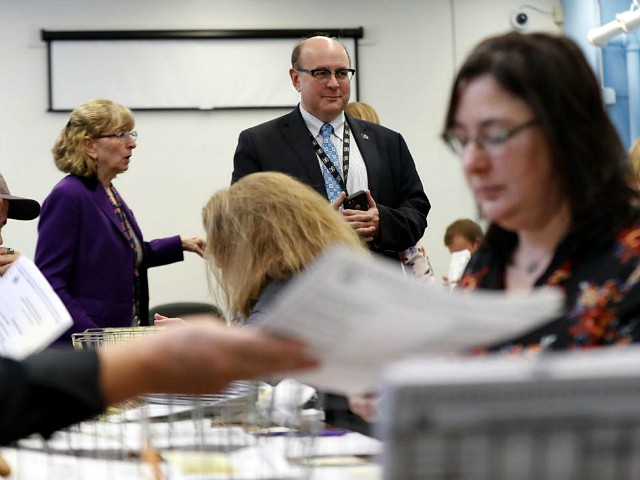 The Maine Republican Party called on Maine Secretary of State Matt Dunlap on Thursday to launch an investigation into election irregularities it has uncovered in the controversial 2nd congressional district election held on November 6.

The party released evidence of those irregularities on Thursday: 17 sworn affidavits from voters who are residents of four towns in southern Maine that are part of the 1st Congressional District, who say that on election day, they were given ballots for the November 6 election in the 2nd Congressional District between Democrat Jared Golden and Rep. Bruce Poliquin (R-ME-02).

As Breitbart News reported, “Secretary of State Dunlap, a Democrat, declared Democrat Jared Golden the winner of the election on November 15, despite the fact that Rep. Bruce Poliquin (R-ME-02) received 2,632 more votes than Golden on election day, a consequence of the state’s implementation of a controversial ‘rank voting’ system.”

Earlier on Thursday, the secretary of state’s office began an official recount in that race, which is expected to last four weeks.

Poliquin and three voters in the 2nd Congressional District have filed a federal lawsuit asking that Golden’s victory be invalidated due to the fact that Maine’s “rank voting” system is unconstitutional. Federal Judge Larry Walker said on Wednesday he expects to issue a ruling, in that case, sometime next week.

“Clearly, there is a problem we need to get to the bottom of here,” Jason Savage, executive director of the Maine GOP, said in a statement released on Thursday.

“This is the latest in a long line of irregularities in Maine’s elections, and one that these voters deserve answers for. When the wrong candidates are showing up ballots far outside their district, apparently in significant numbers, we need an investigation,” Savage said, adding:

We are seeking an investigation into these ballots immediately, and at the same time pursuing more than a dozen additional credible leads of ballots in CD1 that named CD2 candidates. Not all of these are confined to these four towns.

Simple explanations or claims this did not occur do not seem to be enough. More voters keep coming forward to state this occurred. There is tremendous concern about how these votes were counted.

This issue has been simmering since the election, and now with this many voters signing sworn affidavits, the Secretary of State and local municipal elections should stop ignoring them and launch an investigation immediately.

The signed affidavits can be seen here.